Sport organisations need to clearly understand the impacts and heed the call to action, said Christoph Joho, the co-meeting director of the Weltklasse Zurich, during a lively discussion at ‘Sustainability challenges: Is athletics on track?’, a panel discussion hosted by the organisers of the event ahead of the Wanda Diamond League Final in the Swiss city.

New and younger fans, Joho said, rate an organisation or event by how relevant it is to them and their experience. “If you don’t respond or position yourself in the right direction, you will become irrelevant,” he said. “For younger generations this is key, because it is their future.”

“Young people don’t just look at us as an international federation,” he said. “It may just be a subliminal observation, but I think they’re asking themselves fundamentally a very important question when they look at us and say: ‘Do they reflect the world I live in?’ And if we don’t, then the reality of it is that they’ll move on to something that does.

“For me, the issue is that young people are sitting at the crossroads of all the big moral hotspots in a way that previous generations didn’t. They’re very much more attuned to it. We need to not only be saying something, we need to show that we are able to break out of our sport silo and be sitting at the table and making a contribution.”

Those survey results, Coe said, are a “pretty clear steer to the leadership in any sport, that whether you understand it or not, you have to make sure you do understand it, and that you are putting practical applications in place.” 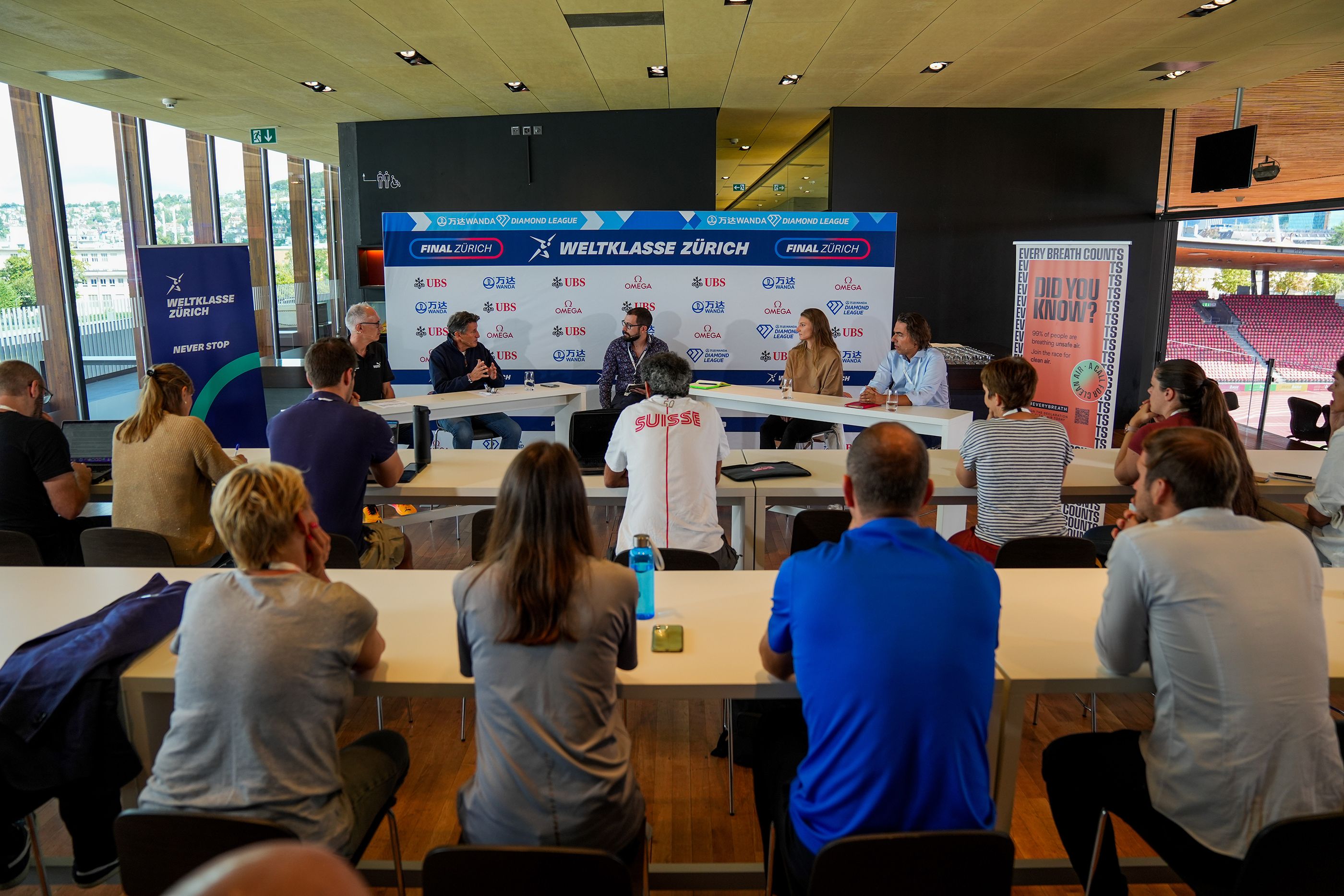 The Sustainability Challenges: Is athletics on track? Review and Outlook panel session in Zurich (© Quinten Lafort)

Maintaining relevance among a more demanding audience was just one of the themes of the wide-ranging discussion. The panellists, which included Switzerland's European indoor 60m champion Ajla Del Ponte and Tiberio Daddi, an Associate Professor in Corporate Environmental Management at the Sant'Anna School for Advanced Studies in Pisa, also discussed the importance of reducing their own environmental and social impacts, building credibility around their sustainability initiatives, helping athletes to use their platforms to help drive behavioural change and fighting accusations of greenwashing.

“The sport needs to be very transparent and honest, showing that these are our goals, and this is how we’re meeting them,” Del Ponte said. “This is how everyone can have faith in the process and show that there is no greenwashing.”

Daddi said third party certifications of initiatives are critical to build credibility, as is working in alignment with ISO standards.

“We shouldn’t hide from the fact that what we need to do is going to cost,” Coe said. “It’s important to bear in mind the costs of not investing. I will always argue that you’re investing in children and grandchildren by providing a sustainable environment for them.

Increasingly, Joho added, sponsors are looking to partner with events and organisations that have strong sustainability initiatives as a core element of their staging and delivery. That investment, he pointed out, reaps further dividends. “If you do it right, it’s also an opportunity to get more sponsors and develop the sport at the same time.”

All issued calls to action. For Joho, it’s to continue to build networks and collaborations as his organisation pursues its ambitious target of becoming carbon zero across all its operations by 2028 to mark the meeting’s 100th anniversary.

“We want to be a role model in athletics,” he said. “By 2028 we will be net zero in all of our Weltklasse competitions year-round – including the 1000 UBS Kids Cup athletics events we put on each year.” Their strategy also includes a mentoring programme to include more women into their event’s management roles.

Coe said World Athletics will continue to embed sustainability into its licensing and bidding processes and regulations, making it a key component of a successful hosting bid. Coe added that World Athletics will announce its first class of Better World Ambassadors next month, a group of athletes who will more actively support global, continental and national level environmental, social and economic sustainability initiatives.

Daddi said he’ll continue working with sports organisations to learn and understand sport’s key environmental impacts and develop and implement best practice examples, while Del Ponte said she’ll use her social media platforms to spread awareness around issues she truly feels passionate about, including environmental and social sustainability. “If I begin to send messages, one step after another it will land somewhere,” she explained. “So, this is what I’m going to begin to push.”