She's taken 2014 by storm with three remarkable world records. Ahead of her assault on the 3000m world indoor title, SPIKES takes a walk down Sopot pier with Genzebe Dibaba.

Genzebe wanted to compete in the 1500m and 3000m at the world indoors, but timings wouldn't allow it. "I had to pick just one," she says. "I decided to focus on the 3000m, to do something great for my country.”

Genzebe Dibaba posing on a pier ahead of Sopot 2014

Big sister Tirunesh might be known the Baby Faced Destroyer, but we reckon Genze's got a face that could stop traffic.

“I didn’t expect that I would break the 1500m world record. I only expected to run a fast time. After that, I was pretty certain that I would be able to break all three," says Dibaba, of her 1500m, 3000m and two-mile hat-trick.

Genzebe Dibaba laying on the pier ahead of Sopot 2014

Genze's game for a laugh, but is in Sopot on a mission. “I'm not looking for records here: just to win."

She does her own nails, too

Genzebe Dibaba shows us her nails ahead of Sopot 2014

As if dominating middle distance running wasn't enough for one girl...

Note, the following message should display at the bottom of every page on this site. For some reason it isn't, but we're working on it:

"All images copyright Getty Images or the respective image creator and cannot be reproduced commercially without permission." 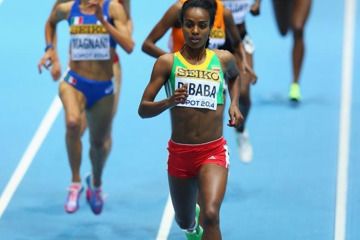