The year is 1921. David Lloyd George is Britain's Prime Minister with Winston Churchill appointed Colonial Secretary, the King of the United Kingdom and Emperor of India is George V, Warren Harding is inaugurated as U.S. president, Vladimir Lenin heads the government of Soviet Russia, Prince Philip (Duke of Edinburgh) is born, Bill Tilden and Suzanne Lenglen are the Wimbledon champions and Jack Dempsey holds the world heavyweight title. So what is happening in athletics?

Two gold medallists at the previous year's Antwerp Olympics were the brightest stars, and they could hardly have been more different. One was the flamboyant, stocky American sprinter Charley Paddock, the other was the dour Finnish middle and long distance runner Paavo Nurmi.

For Paddock, 11 world records and bests

Paddock, 20, set no fewer than 11 world records or unratified world best performances that season. The first came as early as 26 March when he ran 9.6 (actually 9 3/5 as times were recorded then) for 100 yards, incorporating his spectacular trademark leap at the tape which made him such a favourite with the fans. That equalled the inaugural IAAF ratified record by Daniel Kelly in 1906 and tied by Howard Drew in 1914. Competing for the University of Southern California in a match against arch-rivals University of California at Berkeley, Paddock went through his usual routine of vigorously knocking wood before he settled into the holes he had dug at the start line. But that wasn't all, for in the straight 220 yards he was timed at 20.8 (20 4/5) to take a full 0.4 (2/5) from the previous world record.

Just three days later, at Stanford, he clocked the second of five 9.6 timings that season, while the third came at another Californian venue, Redlands, on what was described as a bitterly cold 23 April. On that occasion he didn't just leap forward at the 100y mark but regained his rhythm to take two quick strides before leaping for the tape at 100m, which he reached in 10.4, taking a fifth of a second off the world record. No one would officially run faster until 1930. He also displayed his stamina later that afternoon by setting a world best at 300y (30.2) on the way to an officially ratified world record of 33.2 for 300m.

Of course it's impossible for any human – even Usain Bolt – to cover 10 yards in 0.6 sec, but the great sportswriter Maxwell Stiles, who was present, offers an explanation. "The answer to these sceptics is that 10th-sec watches were not legal in 1921, and all the officials used 5th-sec watches. The writer has little doubt that had there been 10th-sec watches in this race the times would have been a world record 9.5 for 100 yards and 10.2 for 110 yards."

Even so, an 0.7 differential remains implausible and so, correctly, the 10.2 was never granted record recognition. No one ran 100m in that time officially until Jesse Owens in 1936. Paddock ran a second race in Pasadena: 19.0 for a straight 200y despite sustaining a leg injury at the 150y mark (14.2). He concluded his season on 4 July at the national (AAU) championships in Pasadena, completing a 9.6/21.8 double.

So how effective was Paddock's famous leap for the tape from between 12 and 16 feet (3.66m to 4.88m) out? Paddock himself claimed, "I can jump faster than I can run if I have the momentum, because my tremendous leg drive hurls me forward so fast that I can cut my time down a fifth of a second. The longer the leap the better." Paddock's coach, the celebrated Dean Cromwell, begged to differ. "Paddock can gain perhaps 6 inches on his jump, but he can't gain a fifth of a second, or six feet." 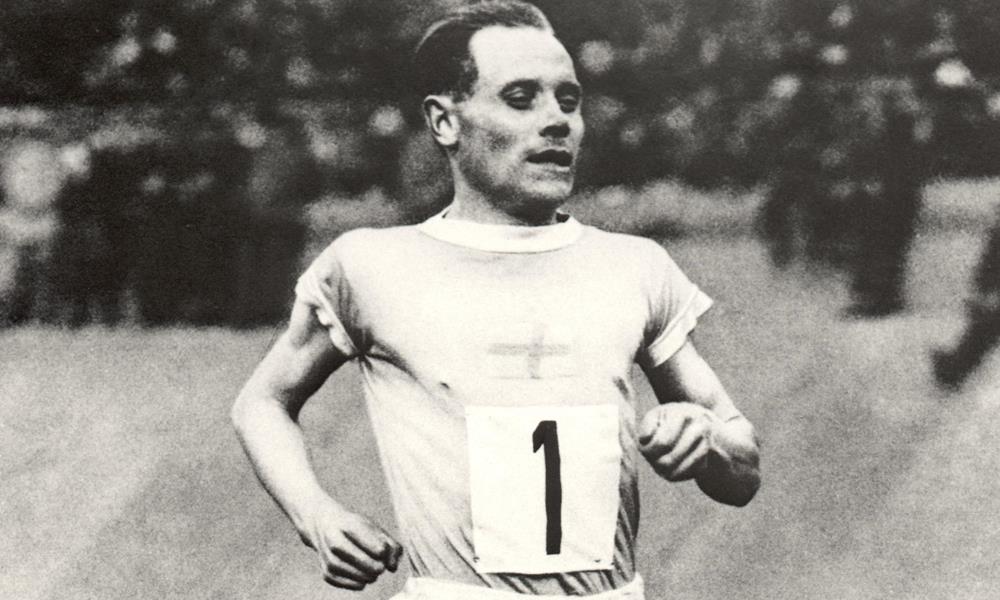 Paddock also came to an untimely end, in his case during the Second World War. A field artillery officer in the Great War, he died in a plane crash in Alaska in 1943, aged 42, while serving in the US Marine Corps. His track career had extended to 1929. At the 1924 Olympics in Paris he placed a disappointing fifth in the 100m won by Harold Abrahams but grabbed a silver medal in the 200m, while in Los Angeles in 1926 he ran the first 9.5 100y but under the prevailing rules that was ratified as merely equalling the world record of 9.6.

He continued to dominate distance running for several more years, winning the Olympic 10,000m title in 1928 and setting the last of his 29 outdoor world records or bests at 2 miles in 1931. But for being declared a professional he might well have won the Olympic marathon in 1932, but 20 years later he enjoyed one last moment of Olympic glory when, to great acclaim, he carried the torch into the stadium for the opening ceremony in Helsinki. He died in 1973, aged 76.

BACK
Pages related to this articleAthletes
Paavo Nurmi