From Curel to Can, a brief history of Turkish athletics

Turkey's Yasemin Can celebrates her 10,000m win at the 2016 European Athletics Championships in Amsterdam (© Getty Images)

The Turkish athletics federation has opted for a low-key celebration of its centenary in 2022. Dates differ between sources as to when exactly from June to August 1922 the federation was founded, partly because of differences between the Rumi and Georgian calendars, but there is no doubt that the country has a rich athletics history.

Evidence suggests that the first athletics competition in Turkey that would be recognisable by modern standards was organised by a Monsieur Curel, a French physical education teacher, at the Mekteb-i Sultani school in the Kagithane neighbourhood of Istanbul from which the famous Galatasaray Sports Club emerged.

In 1870, Curel organised a ‘training day’ for the school in which there were various athletics events, and the students were rewarded with various prizes as well as a meal of lamb and rice.

By the end of the 19th century, athletics competitions were taking place in several Turkish cities, notably among the Greek community in Smyrna – modern day Izmir – and usually organised by the multi-sports clubs that were typical in many European countries at that time.

Vahram Papazyan was the first Turkish athlete to compete at a major overseas competition when he travelled to the 1906 Intercalated Games in Athens, despite being only 13 years old, and ran in the 800m and 1500m.

The Ottoman Empire as it was then joined the International Olympic Committee in 1911 and then made a public appeal for sportsmen to represent it at the Stockholm 1912 Olympic Games.

Papazyan and Migirdic Migiryan answered their call. Unfortunately, neither man was close to challenging for medals. Papazyan failed to finish both his opening 800m and 1500m while Migiryan competed in three throwing events as well as the pentathlon and decathlon, finishing 28th and last in the latter event, although he would compete alongside the legendary Jim Thorpe in both the combined event contests.

However, Migiryan does have the distinction of being the first Turkish athlete to finish in the top eight of any Olympic sport when taking seventh place in the two-handed shot put; although there were only seven competitors, and he was more than three metres adrift of his nearest rival.

During the following decades, athletics slowly began to take hold in the country despite Turkey not sending anybody to the 1920 Olympics owing to the Greco-Turkish war.

Following the end of the war, the Turkish Athletic Federation founded in 1922 as a branch of the Turkish Sports Associations Union and, following the establishment of the Republic of Turkey in 1923, athletes were sent to the Olympic Games of 1924 and 1928.

Turkey was also one of the original six nations that competed in the first official Balkan Athletics Championships in 1930 – its first victory coming the following year when a Turkish quartet won the 4x100m – and the country has only missed two editions since in 1957 and 1974; first hosting the championships in Istanbul in 1935 and on 12 subsequent occasions, most recently in Izmir in 2009.

Ruhi Sarialp won Turkey’s first Olympic athletics medal when he took the 1948 triple jump bronze, upsetting the odds and jumping 15.025m (converted as the distances in London were measured in feet and inches), less than five centimetres behind his Turkish record of 15.07m from earlier that summer and he was one of the few competitors to perform close to his best in the chilly conditions.

Two years later, Sarialp also finished third at the European Athletics Championships in Brussels to get Turkey’s first continental athletics medal and rightfully remains an icon of Turkish athletics, staying involved with the sport long after his retirement in 1953.

Turn the clock forward 20 years from London and Ismail Akcay, who had won the 1966 and 1968 Balkan marathon titles and would win again in 1971 and 1973, almost emulated Sarialp when he finished fourth in the challenging conditions over the classic distance in Mexico City. He would also go on to finish fifth in the following year’s European Athletics Championships.

By the admission of the Turkish federation itself, athletics stagnated in the country during the 1970s and 80s but started to recover its place as one of the country’s most popular and successful sports as the end of the last century drew to a close.

Turkey’s reputation was rocked by some high-profile doping cases in the early 21st century, but in recent times the problem appears to have become much less pernicious thanks to efforts of both World Athletics and the Turkish federation.

Yasmani Copello, who won bronze in the Rio 2016 Olympic Games 400m hurdles, and Yasemin Can have done much to restore Turkey’s standing.

The latter won a European 5000m and 10,000m double in 2016 and triumphed at four consecutive European Cross Country Championships between 2016 and 2019. Can also impressively regained her continental 10,000m crown at last month’s European Athletics Championships in Munich. 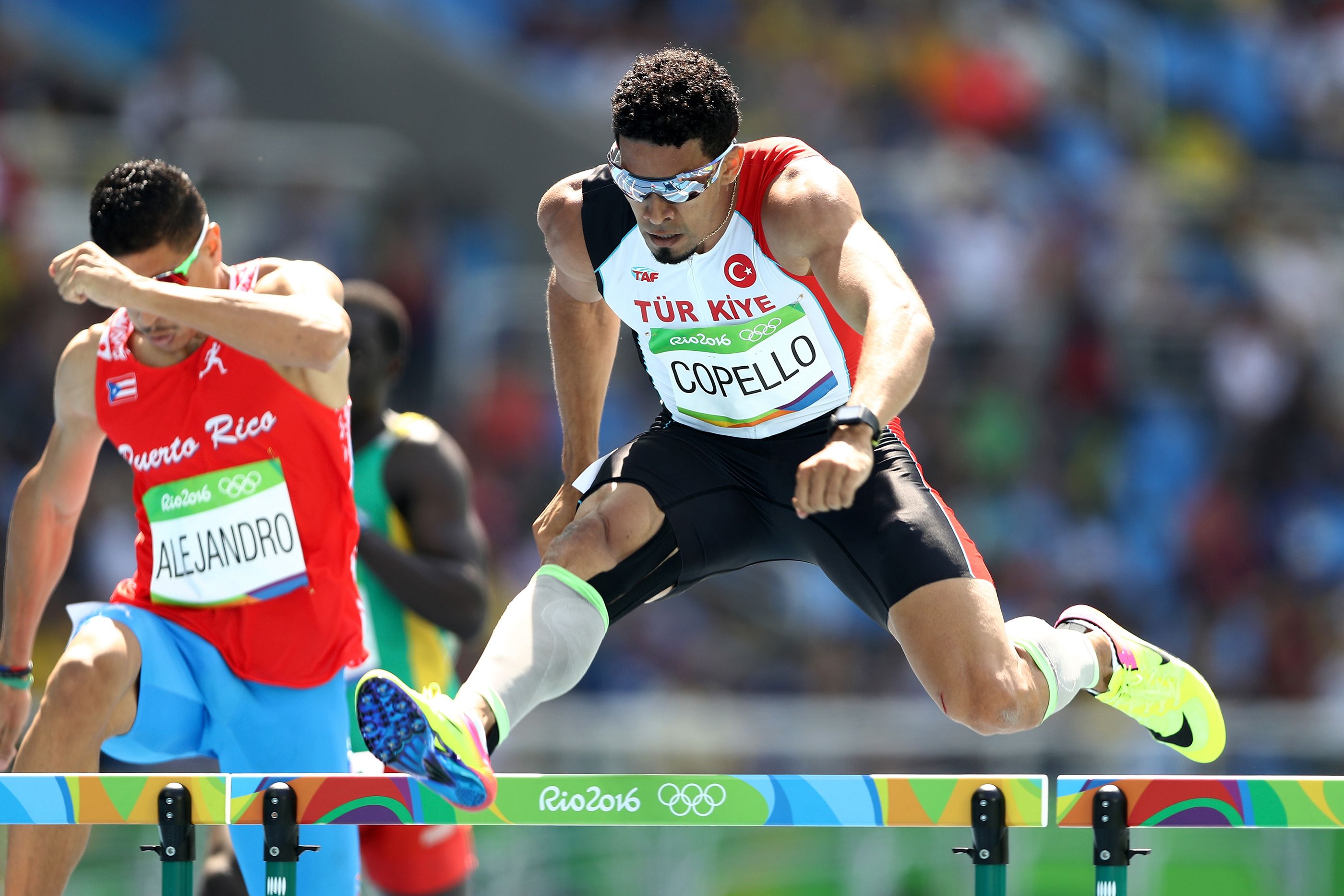 Guliyev gets gold in London

The 2017 World Athletics Championships – especially Thursday 9 August – was also a high-water mark for Turkish athletics with Ramil Guliyev speeding to Turkey’s first ever world title when he won the 200m.

After running an outstanding bend, Guliyev was fractionally ahead of the rest coming into the home straight and never relinquished his lead.

Barely 30 minutes after Guliyev had won his title, Copello was inspired to take a 400m hurdles silver medal behind Karsten Warholm.

No Turkish athlete has won a medal at the three subsequent global athletics celebrations but with Can resurgent and returning to her superb early career form in 2022, and Guilyev and Copello still competitive in international competition despite being well into their 30s, there are hopes that this brief barren streak may be broken at the World Athletics Championships in Budapest next year.

Into the bargain, there is the emerging pole vault talent Ersu Sasma, a finalist at the Tokyo Olympic Games and this year’s World Athletics Championships, and others such as triple jumper Necati Er and race walker Meryem Bekmez, who could potentially enter the reckoning for medals in the Hungarian capital.

The grassroots base is certainly there for Turkish athletics to prosper in the near future, with almost 200,000 licensed athletes and more than 1000 clubs across the country.

BACK
Pages related to this articleAthletes
Ramil GULIYEV