Though three days of the Russian Junior Championships in Cheboksary didn’t provide any records or world-leading marks, there were some enthralling contests in the men’s triple jump and javelin.

By any standard, five jumpers finishing within eight centimetres of one another is something of a rarity. The eventual winner, 17-year-old Vitaly Pavlov, jumped 15.17m, while just one centimetre separated the two other medallists, Alexey Postnov and Vildan Sultanbekov, who jumped 15.14m and 15.13m respectively.

Behind them, Sergey Hilimendik jumped 15.12m for fourth place, and Dmitry Chernov leapt 15.09m for fifth. Incidentally these marks don’t make it into the top 20 on this year’s world junior lists, but considering the competitive nature of the event, there’s plenty of motivation for each of them to progress.

Relatively speaking – given the longer distances involved – the results of the javelin were even closer as just 15 centimetres covered the top five athletes. Winner Andrey Sadovnikov sent his spear out to 66.15m, just seven centimetres ahead of Egor Nikolayev.

Ruslan Emurlayev threw 66.03m in third place, and just one centimetre separated the athletes in fourth and fifth as Vladislav Panasenkov and Ivan Filippov threw 66.01m and 66.00m respectively.

On this year’s world junior lists, Lysenko is just two centimetres behind world junior leader Andrei Skabeika from Belarus, who is two years his senior.

Ilya Terentyev made huge progress in the hammer, improving his PB by almost three metres. His winning mark of 78.23m moves him to third on this year’s world junior list and he too will head to Eugene with hopes of a medal.

Yana Glotova, who took bronze in the 4x400m at the 2012 World Junior Championships, was the fastest in the 400m with her winning time of 52.79. It was her fourth national junior title over the distance, having now won two titles indoors and two outdoors.

European junior silver medallist Leonid Kobelev equalled his season’s best of 5.30m to win the pole vault, while Anastasiya Sadovnikova – no relation to javelin winner Andrey – won the women’s pole vault with 4.25m. Both Kobelev and Sadovnikova rank among the top 10 in their event on this year’s world junior lists.

Kristina Sivkova, the 17-year-old sprint prodigy who last season broke Irina Privalova’s national youth 60m record, moved up to the longer distance and took the 200m title in 23.83, just 0.03 short of the PB she set last summer at the Moscow World Challenge meeting. 16-year-old Anastasiya Zholobova was a distant second in 24.05, but she took some consolation from winning the 100m title in 11.79 after clocking a PB of 11.67 in the semi-final.

BACK
Pages related to this articleAthletes
Ilya Terentyev 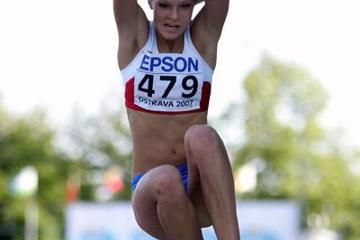