A student of physics at Kyoto University, Yamanishi judged his tactics to perfection to win the first men’s event to be decided at the World Athletics Championships Oregon22 in hot and humid conditions.

Whittling down the pack by degrees with a series of surges, the 26-year-old Olympic bronze medallist emerged victorious from what turned into a head-to-head with Ikeda by uncorking a devastating 3:40 final kilometre on the last of 20 punishing circuits of Martin Luther King Jnr Boulevard.

Crossing the line seven seconds clear in 1:19:07, Yamanishi retained the title he claimed in Doha three years ago, becoming the third multiple winner of the 20km world title after Italy’s Maurizio Damilano (1987 and 1991) and Ecuador’s Jefferson Perez (2003, 2005 and 2007).

For Ikeda, the runner-up in 1:19:14, it was a second global silver medal in 12 months, the 24-year-old having finished second to Italy’s Massimo Stano in the Olympic 20km race walk in Sapporo a year ago.

The battle for bronze was equally dramatic.

Third behind Yamanishi and Ikeda at the World Athletics Race Walking Team Championships in Muscat in March, Kenya’s Samuel Gathimba looked on course for an even more meaningful bronze as he led Perseus Karlstrom into the final circuit. The 34-year-old had to settle for fourth place, however, as the big Swede produced a 3:41 last lap.

Karlstrom matched the bronze he achieved in Doha, clocking 1:19:18, with the gallant Gathimba fourth in 1:19:25 – a huge advance of Kenya’s previous highest placing in the event, 26th.

One notable absentee from the 45-strong field was Olympic champion Stano, the Italian having decided to concentrate on the 35km event on Sunday week (24).

Ireland’s David Kenny fleetingly hit the front at the start but Yaminishi soon set out his intentions, opening up a lead of four seconds as he completed the first 1km lap in 3:55.

The 26-year-old followed up with splits of 4:00 and 4:03 but dropped back into the pack after 3.5km, with the tall, powerful figure of Karlstrom assuming the lead, closely followed by Spain’s European champion Alvaro Martin and Peru’s South American Championships bronze medallist Cesar Augusto Rodriguez.

Just two seconds separated the first 23 men as Karlstrom passed 5km in 20:11, the 1km splits having slowed to 4:06 and 4:07. Soon after, Yamanishi reappeared at the front, taking turns to push the pace with the Ecuadorian Pintado.

By this time, as 7km passed in 28:23, some of the big hitters started to drop behind. Eider Aravalo, the 2017 world champion from Colombia, peeled off the back of the pack, together with Germany’s Olympic fifth-placer Christopher Linke.

Yamanishi was at the front at half way, with the clock at 40:33, but the defending champion whittled down the pack from 18 to 10 with the injection of a 3:51 lap, the fastest of the race.

Once again, he chose to drop back, but not for very long. Yamanishi injected his third surge on lap 13, shaking another two rivals out of the pack.

For the first time Gathimba appeared near the front, tracking Yamanishi and Karlstrom in third. After Yaminishi opened up another gap with a 3:52 split between 13km and 14km, the late-developing Kenyan took up the pursuit together with Olympic silver medallist Ikeda.

Yaminishi led the trio through 15km in 59:57, courtesy of the fastest 5km split of the race: 19.24, but just as a trio of potential medallists appeared to be forming, Karlstrom shot from a seemingly detaching fourth to the very front.

Just before the 17km mark, Yaminishi put his foot on the gas once again. This time he succeeded in dropping Karlstrom decisively. Gathimba also started to fade, leaving the race for gold down to a battle between Yaminishi and Ikeda.

With two laps to go, after the pair breezed through the 18th kilometre in 3:50, Ikeda hit the front for the first time. His teammate, however, didn’t weaken.

At the start of the final lap, after a 3:51 circuit, Yaminishi made his decisive move, punching the air as he approached the line. His 3:40 final loop was only one second faster than the mighty effort that took Karlstrom to bronze ahead of the battling Gathimba.

BACK
Pages related to this articleAthletes
Perseus KARLSTROM 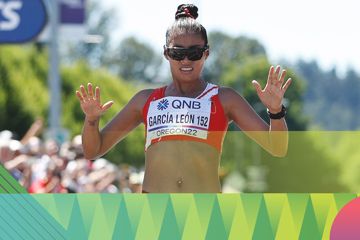 World Athletics Championships Oregon22 gets u...