100m world record holder Maurice Greene, along with other members of the group coached by John Smith, arrived today from Monte Carlo where they have been training for the past couple of weeks. Greene should be running two rounds of the 100m on Saturday, 100m semi-final and final on Sunday, the first two rounds of the 200m on Tuesday, the 200m semi-final on Wednesday and the final on Friday. He should also take part in the US 4x100m team which contest heats on Saturday 28 and, if all goes well, the final on Sunday 29.

Eunice Barber, who will certainly be one to watch in Seville, also arrived today in the Capital of Andalusia. The Sierra Leone born Barber, who now competes for France, is entered in both the 100m hurdles and the heptathlon and has serious chances of winning a medal in the heptathlon where she already accomplished 6505 points this year, second to Dedee Nathan who will not be in Seville. Barber had also qualified for the long jump but will not be able to compete in this event.

Italy’s 1997 long jump bronze medallist Fiona May will be in Seville tomorrow while Athens 10km walk world champion Anna Rita Sidoti is due to arrive on 24 August.

Namibia’s Frank Fredericks will arrive in Seville on Thursday 19 August, just one day before the Opening Ceremony, which will be held on 20 August at 21:30. Great Britain’s 110m world record holder Colin Jackson is also landing in Seville on 19 August. 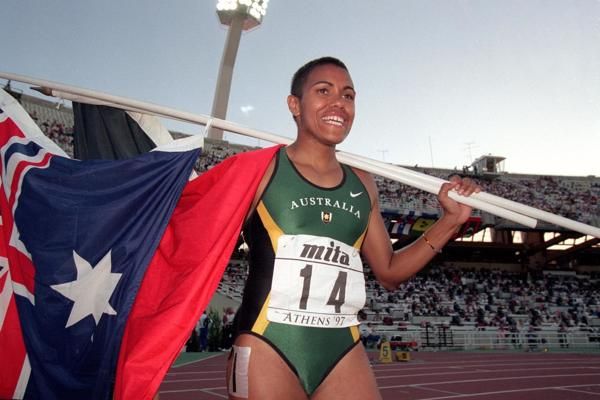 Cathy Freeman had a wonderful 1997 season and her World Championship gold medal represented the first ever won by an Australian Aboriginal. But, as LEN JOHNSON reports, although Freeman was born with sport in her blood, she has covered a lot of ground to get to the top

Dean Starkey (USA) Bronze "I'm not sure when the last American outdoor major championship medal was, 1984 maybe? Anyway I couldn't be more pleased.

The 1997 world indoor champion, Jamaican Michelle Freeman ran the fastest time in the semifinals of the 100m hurdles, and for the second time in this