Six world-leading marks and a golden double secured by Great Britain’s Perri Shakes-Drayton brought the curtain down on an exhilarating final day of action at the European Indoor Championships in Gothenburg, Sweden.

Some 15 finals were decided across two action-packed sessions inside the Scandinavium Arena with Shakes-Drayton storming to success in the individual 400m in the morning session only to return in the afternoon stanza and anchor her country to women’s 4x400m gold.

The 24-year-old, who specialises as a 400m hurdler outdoors, began her busy final day of competition by claiming a commanding victory in the women’s 400m final. She dominated from the outset, taking a decisive lead at the bell before kicking further ahead over the second half of the final to win in a world-leading time of 50.85. Her team-mate Eilidh Child also set a lifetime best of 51.45 for silver with Sweden’s European outdoor 400m champion Moa Hjelmer taking the bronze in a national record 52.04.

A little over seven hours later, Shakes-Drayton anchored the GB quartet to their first ever women’s 4x400m gold medal at a European Indoor Championships in a world-leading, national record and championship record time of 3:27.56. It also lifted Great Britain to fifth on the world indoor all-time list.

Lavillenie was desperately unlucky not to clear a championship record height of 6.07m, but after the bar wobbled it was ruled a foul because although it didn’t tumble to the ground it became dislodged from one of the pole vault pegs – illegal under IAAF rules.

If the attempt had been deemed legal, it would have advanced the Olympic champion to second on the world all-time list, indoors or out. German Bjorn Otto – the Olympic, European and World Indoor silver medallist – finished second on the medal podium to Lavillenie once again with 5.76m. His compatriot Malte Mohr won bronze with the same height.

World leading marks have been set in all four horizontal jumps here in Gothenburg and it was the turn of the men’s long and women’s triple jumpers to take centre stage today. In the latter event, World and European outdoor champion Olha Saladuha was the class of the field, bounding out to a Ukrainian record 14.88m. She dominated the competition to such extent she won gold by the biggest victory margin in the history of the event at the European Indoor Championships, some 58cm clear of Irina Gumenyuk of Russia, the silver medallist.

In the men’s Long Jump World indoor bronze medallist Aleksandr Menkov of Russia denied Sweden’s golden boy Michel Torneus the gold medal in a thrilling competition. Torneus set a national record and world-leading mark of 8.27m with his first jump only for Menkov to immediately respond and nudge out to 8.28m. Menkov then secured the gold in round four with a winning distance of 8.31m, although not before Torneus, the Olympic fourth-placer, bettered his Swedish record in the final round with 8.31m.

The day’s other world lead was set by Eelco Sintnicolaas in the Heptathlon. The rising Dutch talent trailed in second – behind Mihail Dudas overnight – but after recording a 6.91 60m Hurdles, the best in the field, he moved to the top of the standings and was not to relinquish his position.

A 5.40m Pole Vault and 2:38.73 1000m helped secure a national record score of 6372 to propel him to ninth on the world all-time list for the event. Watch out too for 2010 World junior champion Kevin Mayer of France, the silver medallist, who aged just 21 scored a personal best of 6297, which included personal bests in six of the seven disciplines.

Besides the silver and bronze medals won by Torneus and Hjelmer in the men’s Long Jump and women’s 400m respectively, the host nation won both silver and bronze in the women’s High Jump courtesy of Ebba Jungmark and Emma Green Tregaro.

Both athletes cleared a best of 1.96m but had to play second fiddle to Ruth Beitia. The veteran Spaniard – who became the oldest ever winner of this title at 33 – cleared 1.99m at the second time of asking to win her fifth European Indoor Championship high jump medal and her first gold at the event.

Just 0.01 of a second separated the three medallists in the final of the women’s 60m as Bulgaria’s former World junior 100m champion Tezzhan Naimova was awarded the gold in a photo-finish from Mariya Ryemyen of Ukraine after both were awarded the same time of 7.10. Myriam Soumare of France, who set a European-leading time of 7.07 in the semi-final, took bronze in 7.11.

Pavel Maslak added the European indoor 400m title to his continental outdoor crown as the Czech ran a blistering European lead time and national record of 45.66. Over the men’s 800m distance, Poland’s Adam Kszczot became the first repeat champion since 1971 with a dominant display to take gold in 1:48.69. Nataliya Lupu of Ukraine took the women’s 800m gold in 2:00.26 and Portugal’s Sara Moreira was rewarded for a brave front-running performance to take the women’s 3000m title in 8:58.50.

In the day’s three other finals, European steeplechase champion Mahiedine Mekhissi-Benabbad of France snatched gold in the men’s 1500m thanks to a late surge to pip Ilham Tanui Ozbilen of Turkey. Great Britain secured a 4x400m relay double by taking the men’s event, while a last-round throw of 19.25m by Christina Schwanitz secured the German gold in the women’s Shot. 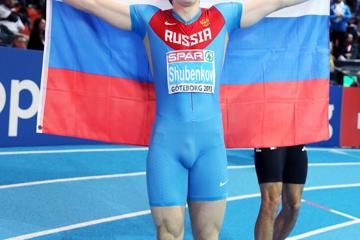 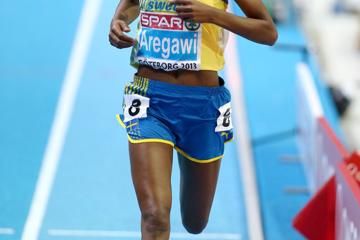