World marathon fourth-placer Callum Hawkins and recent trials winners Chris Thompson and Stephanie Davis are among the first seven members of the athletics squad selected to represent Great Britain and Northern Ireland at the Olympic Games in Tokyo.

Hawkins, who just missed a medal at the 2019 World Athletics Championships in Doha and the 2017 edition of the event in London, had gained pre-selection in December 2019. Ninth at the Rio Olympics in 2016, he demonstrated current form and fitness having acted as a pacemaker at the Müller British Athletics Marathon and 20km Walk Trial at Kew Gardens last week.

There Thompson secured his selection as he won the men’s marathon in a PB and Olympic qualifying time of 2:10:52, just a few days after becoming a father, while Davis had achieved the qualifying standard with 2:27:40 in Valencia in 2019 and improved that PB to 2:27:16 to win at Kew Gardens.

Ben Connor finished behind Thompson at the trials and gains his Olympic place having set the qualifying standard in 2020 with 2:11:20 in London.

"It’s official. My selection for the Olympics has been announced," said Thompson. "Becoming a two-time Olympian and a dad in the space of a week took every ounce of who I am and I couldn’t have rode a finer line."

Jess Piasecki and Steph Twell will join Davis in the women’s marathon. They did not race at the trials but had impressed with their respective times of 2:25:28 in Florence and 2:26:40 in Frankfurt in 2019. Tokyo will be Twell’s third Olympic Games after she made her debut over 1500m in 2008 just a few days after her 19th birthday.

"Dreams really do come true," said Piasecki, who became the third-fastest female in British marathon history with her run in Florence. "Absolutely over the moon to have made it here. Bring on Tokyo."

The 2012 European under-23 cross-country champion had been well on target for a Rio Olympic qualifying time when racing in Florence on her debut in 2015 but was forced to drop out at 32km after tearing her plantar fascia.

Kew Gardens also played host to the British Athletics 20km race walk trials which saw 2016 Olympic sixth-placer Tom Bosworth finish second to secure his qualification for Tokyo, having already achieved the qualifying standard at the European Race Walking Cup in 2019 when he posted a time of 1:20:53.

“It is a great privilege to be able to welcome the first seven members of the athletics squad for Tokyo into Team GB,” said Mark England, Team GB’s Chef de Mission for Tokyo 2020.

“It was clear from watching the coverage of the qualifying event last week, and seeing the emotion felt by each athlete as they crossed the finish line, just how much this selection means to them. The hard work and dedication that goes into securing Olympic qualification is admirable, especially in a year that has come with so many challenges.

“I’d like to congratulate everyone on their fantastic achievements, and we look forward to welcoming them to Tokyo this summer.” 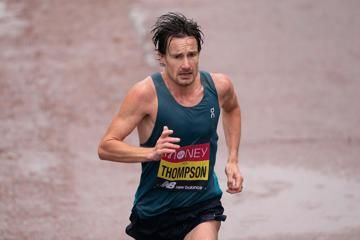 Thompson and Davis cruise to victory at Briti...