Three things to follow on day four in Cali: history in the making

We've already seen some big battles and record-breaking brilliance at the World Athletics U20 Championships Cali 22 and there’s much more in store on day four.

Full daily highlights at a glance

Sembo Almayew might be among the youngest entries in the women’s 3000m steeplechase final, but the 17-year-old is the world U20 leader thanks to the 9:09.19 she ran when finishing runner-up at the Wanda Diamond League meeting in Paris in June.

That was her second consecutive world U18 best, following her 9:18.98 at the FBK Games, and she also already has experience of competing on the world stage – she ran 9:21.10 to finish fifth in her heat at the World Athletics Championships Oregon22 last month.

She certainly made a mark in the heats in Cali, winning her race by over 17 seconds in 9:52.65, and she did it despite suffering toothache and feeling the effects of having arrived in Colombia only the day before, after a 36-hour journey from Ethiopia.

Almayew may not have things all her own way, though. Kenya’s 18-year-old Faith Cherotich claimed bronze at the last edition of the World U20 Championships held on her home soil in Nairobi last year and ran 9:12.04 in the Kenyan capital in May. She was the quickest in the first round in Cali, winning her heat in 9:38.18 ahead of Almayew’s 17-year-old teammate Meseret Yeshaneh, who clocked 9:41.99 and has a PB of 9:33.34.

Cherotich’s compatriot Pamela Kosgei has run 9:54.20 this year and was second behind Almayew in the heats, while they will be joined on the start line for the final by Spain’s Marta Serrano, who was sixth in Nairobi and ran a 9:48.64 national U20 record in June, and Hungary’s Greta Varga, who clocked a national U20 record of her own in June with 9:50.63. Morocco’s 2021 eighth-place finisher Khadija Ennasri has run 10:00.49 this year, while Tunisia’s Rihab Dhahri has clocked 10:03.15.

After retaining his 100m title in a world U20 record of 9.91 on Tuesday, what can Letsile Tebogo do over double the distance?

The 19-year-old from of Botswana has already broken the 200m championship record, running 19.99 in his heat on Wednesday morning. Then, in Wednesday afternoon’s semifinals, he ran 20.23. Now he’ll go for gold again but there are some challengers who will hope to stand in his way.

Blessing Akawasi Afrifah of Israel clocked a 20.37 national U20 record in the heats in Cali and then improved again to 20.17 in the semifinals, looking as though he still had plenty to give. South Africa’s Benjamin Richardson, the 100m bronze medallist in Cali, ran a PB of 20.38 last month and was just 0.01 off that in his semifinal.

Jamaica’s Bryan Levell reached the 200m semifinals in Nairobi last year and formed part of the silver medal-winning 4x100m team. Since then he has improved his PB to 20.34, that time coming in the semifinals in Cali. Winner at both the CARIFTA Games and ISSA/Grace Kennedy Boys and Girls Champs, Levell will line up as the third-fastest in the final.

With another three athletes on the start line with PBs under 20.50, the final looks set to be a thriller.

Carolina Kluft was the last athlete to win two world U20 heptathlon titles and the Swedish combined events great achieved it 20 years ago. Now Finland's Saga Vanninen has the chance to emulate the feat and her campaign continues on Thursday.

But the competition always looked set to be close and so it has proven. After those first four events, just 75 points separates Vanninen from Germany’s 18-year-old Sandrina Sprengel, who has a PB of 6015 points and set lifetime bests in three of the four events on Wednesday - 13.94 in the 100m hurdles, 1.81m in the high jump and 24.35 in the 200m.

There’s then just another 89 points between Sprengel and Luna Goureau of France (3577), with Estonia’s Liisa-Maria Lusti in fourth (3496) and Germany’s Serina Riedel in fifth (3485).

The competition continues with the long jump, javelin and 800m on day two. 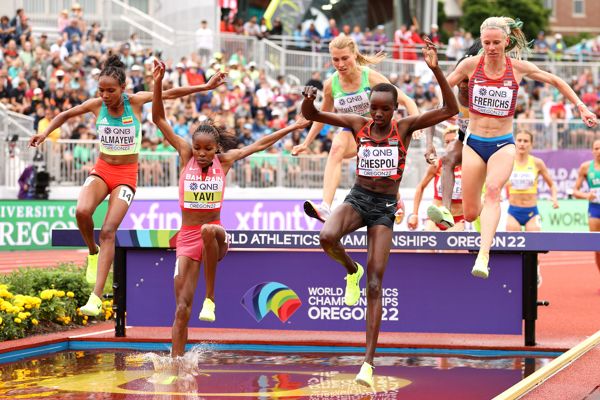