Like most teenagers, Willy Tarbei wakes reluctantly, the sound of a thumping fist on his door slowly pulling him from his slumber.

It’s two days into the IAAF World U20 Championships Bydgoszcz 2016, and the Kenyan manager offers Tarbei an update on his teammates’ progress before leaving the 18-year-old with a gentle reminder.

The youngster smiles a wide, white-toothed smile and nods in agreement.

Days before, however, as Tarbei limped his way across a street in downtown Bydgoszcz, it looked like a medal of any kind would require some kind of miracle, the kind Tarbei prayed for at his local church, where he is a proud choir master due to his singing talent.

It’s on the track, though, where his natural ability has everyone talking.

“I met him first at the Kenyan youth trials in 2015,” commented Michel Boeting, Tarbei's manager. “In the final him and Kipyegon Bett were fighting for the lead and ran the first lap in 50 seconds. We waited for them to die, thinking the third and fourth athletes would come through, but they hung on.”

Tarbei's career started out at 10,000m, a distance he was horribly incompatible with, back when he was just another Kenyan kid wanting to be like the greats. He grew up a few miles from Mosoriot in the Nandi district, not far from where steeplechase star Conseslus Kipruto calls home.

One day, Tarbei saw Kipruto – another past world U18 champion – cruising past on a training run so seized the initiative and followed suit. “He was a champion already, so I didn’t keep up,” recalled Tarbei, with a smile on his face. “But he would give me advice and tell me if I run 800, I would run a very good time.”

Like many Kenyans, Tarbei grew up running to school, though its relative proximity to his home – two kilometres – meant he was developing an engine built more for speed than endurance.

His first sport was volleyball, where he harnessed his height to good advantage for his school, St Jude’s. In late 2014, Tarbei accepted an invite to a training camp at St Patrick’s High School in Iten, the place where champions are produced with astounding frequency by Irishman Brother Colm O’Connell and his assistant coach Ian Kiprono.

Tarbei knew St Patrick’s was the place where David Rudisha transformed himself from a tall, talented teenager into the world’s greatest 800m runner.

He wanted to do the same.

During school holidays, Tarbei returned to St Patrick’s for training camps, joining them full-time after his school graduation last year. He had previously trained just once a day, but soon adjusted to an increased workload.

“We wake up at 6.30am, go for a long run of about one hour slowly,” said Tarbei. “Then mid-morning we do the programme given to us by the coach, either exercises or very hard training like speedwork. If training was hard, we’ll do nothing in the afternoon but when it’s not, then we may run again.”

In O’Connell, he believes he’s found the man to take him to the summit of 800m running. “He knows how to train an athlete for 800m, exactly what you need to do,” added the teenager. “I follow everything. When he tells you something, you listen; and he told me I am like Rudisha.”

On the days when Tarbei got the chance to run with the great one, even Rudisha himself thought so.

“It gives me morale to see I am able to run with him,” said Tarbei. “My first time with him, I was strong and able to follow and I saw there is nothing different with him. He used to say I was like him, that I was strong and run with the same style.”

Coming to Bydgoszcz, Tarbei was unsure of his form, having missed considerable training with a foot injury. “I was not in good shape but I tried my best,” he said. “I did what I could.”

In the final, Tarbei tracked his teammate Bett all the way but, in the wake of his injury, he just couldn’t find the extra gear to get past his compatriot in the home straight.

No matter, though, because despite his desire to conquer the world at U20 level, Tarbei knows what really matters is how good he becomes as a senior.

“He is still learning a lot,” said Boeting. “Obviously he’s very talented but he doesn’t have a lot of knowledge about training. It’s hard to make him run more than a half hour. Tempo runs are a real struggle for him. He’s an athlete coming from speed, used to running 400s in school, so in that aspect he’s a bit like Rudisha.”

There it is again, the comparison it’s hard not to make when you look at Tarbei, even if burdening him with the goal of becoming Rudisha version 2.0 seems grossly unfair.

The Rio 2016 Olympic Games will come too soon for him but Tarbei remains on track to reach the sport's pinnacle in four years’ time in Tokyo.

Back to sleep, then, for the prodigious teenage talent, where a new dream is beginning to take hold. 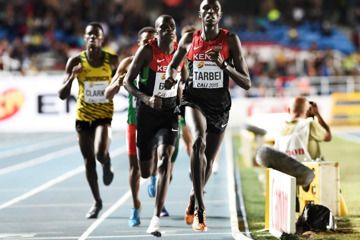 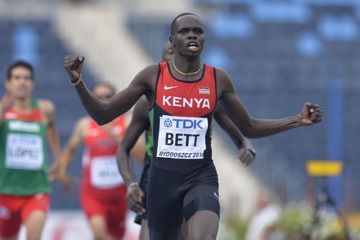