Oh, what a night! As someone once put it in song.

A capacity Stark Arena crowd bade farewell to these unforgettable World Athletics Indoor Championships Belgrade 22 in stunning fashion as Mondo Duplantis stole the show with a stratospheric 6.20m pole vault at the end of a breathless final day of action in Serbia’s capital city.

Ivana Vuleta already had the place rocking, having delivered long jump gold for the host nation. And Grant Holloway had served up a world record-equalling performance, the peerlessly smooth high hurdler from the US following up Venezuelan Yulimar Rojas’ stunning 15.74m triple jump world record in the morning session by matching his global indoor 60m hurdles mark of 7.29 in the semifinals.

Holloway followed through with victory in the final in 7.39 and Duplantis himself had the pole vault gold secured, with crisp first-time clearances at 5.60m, 5.85m and 5.95m, before having the stage to himself for three shots at a heaven-wards 6.20m.

Only two weeks ago the 22-year-old Swede had raised his world record to 6.19m in the World Athletics Indoor Tour Silver meeting in the same Belgrade arena.

After being obliged to wait for the mayhem of the two 4x400m relay finals to complete the track action, 6.20m looked a notch too far as the Olympic champion ducked under the bar on his first two attempts.

At the third time of asking, though, he steadied himself on the runway and launched himself on a near-perfect clearance, rattling – but, crucially, not dislodging – the bar on his way back to terra firma.

Then he bounded across the stands to be hugged by his girlfriend before performing a celebratory dance.

The world, or rather the air above it, knows no bounds for the soaring young Swede. Or so it would seem.

"To break the world record two times in two weeks, I can't complain," Duplantis said. "There are no limits. The sky's the limit. Going over 6.20m for the first time - it's hard to explain. It's something that you can only dream of."

Seventh with a 5.70m clearance on his world indoor debut as an 18-year-old in Birmingham four years ago, Duplantis has now set four world records as senior, in addition to the 10 he amassed in the U20 ranks.

In his upwardly mobile wake, Brazil’s 2016 Olympic champion Thiago Braz took silver with a South American indoor record 5.95m and Chris Nilsen of the US, runner up to Duplantis in the Tokyo Olympics last year, the bronze with 5.90m.

Over the barriers at ground level, Holloway has looked as untouchable as Duplantis up in the air, though his Olympic 110m hurdles final loss to Jamaica’s Hansle Parchment served as a reminder of his track and field mortality. 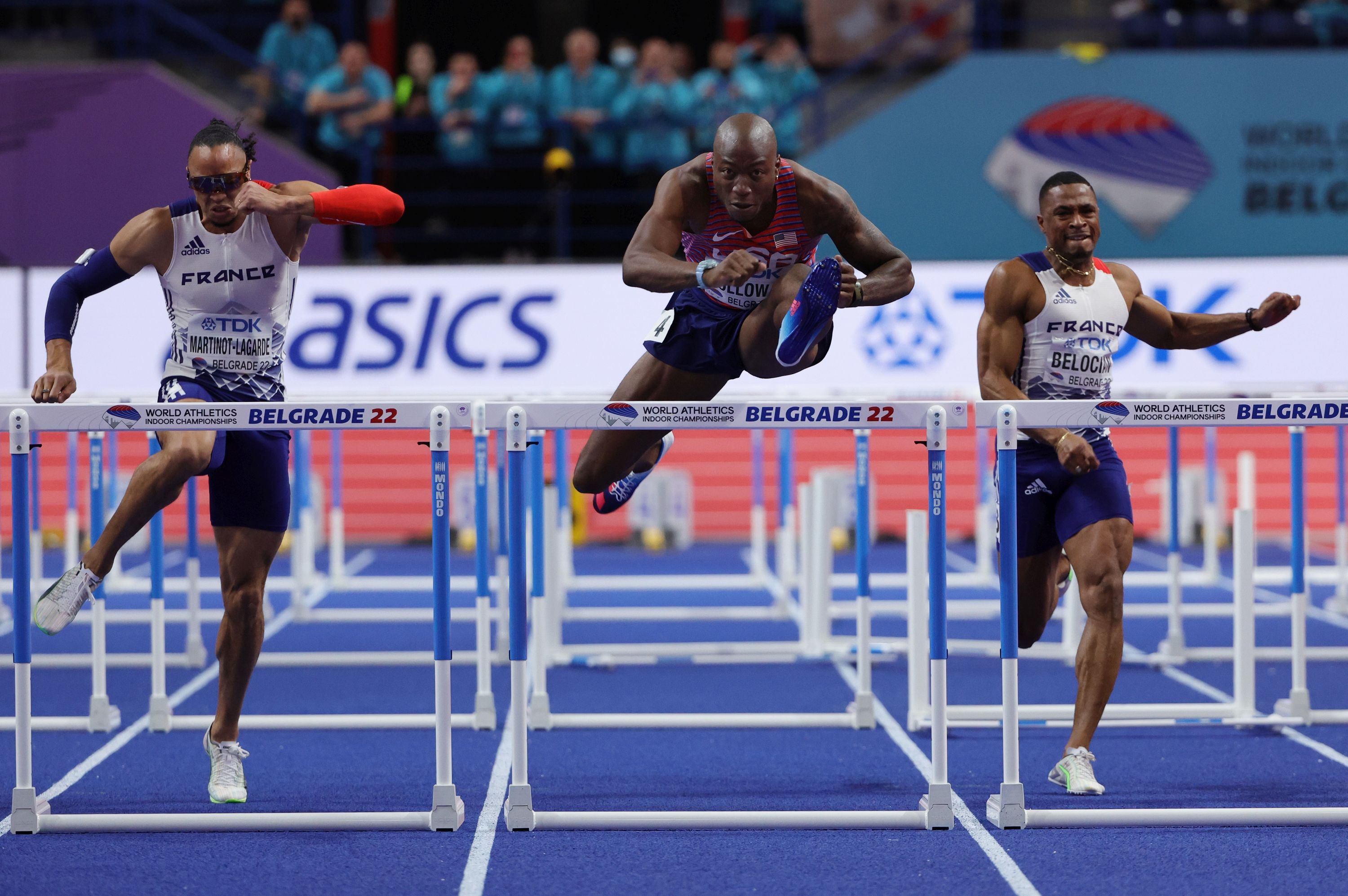 Still, the 24-year-old world outdoor champion from Chesapeake, Virginia, has been untouchable indoors in the 60m hurdles for 67 races and eight years now.

His winning time in the final was a ‘mere’ 7.39, still good enough for gold by 0.11 with Frenchman Pascal Martinot-Lagarde completing a hat-trick of world indoor silvers in 7.50 and Holloway’s US teammate Jarret Eaton taking bronze in 7.50.

“I know what I’m capable of, so that time in the semi wasn’t a shock to me,” Holloway reflected. “To come and run a world record, to win a title and name myself world champion again, is a great feeling.”

To place sixth in the final in 7.62 was quite a satisfying feeling for David King. The Briton was the lucky winner of a name draw to decide the final qualifying place for the final after he and Shusei Nomoto both clocked 7.567.

Even before the off, the women’s long jump final had the feel of a coronation for the queen of Serbian track and field. 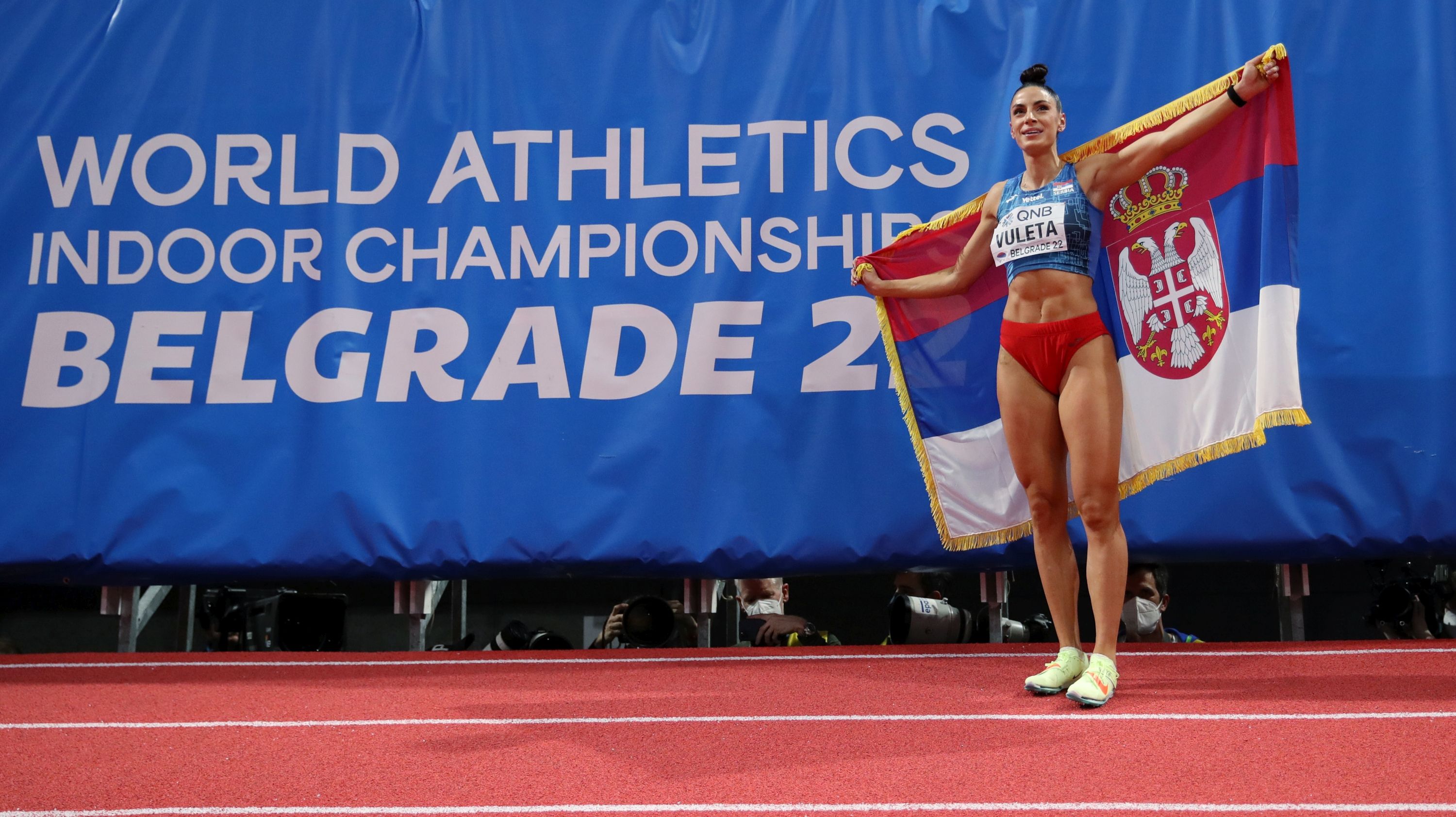 The noise in the Stark Arena was loud enough when Vuleta was introduced to the crowd as the defending long jump champion. It cranked up a notch when the 31-year-old took the lead with a 6.89m jump in round two and again when she effectively sealed the deal with 7.06m in round four.

The former Ivana Spanovic only needed the two valid jumps that she managed on a runway that proved too quick to master in the opening round for 10 of the 15 finalists, herself included.

"I had a duty to defend the world title," Vuleta told a packed post-event press conference room. "My medal was like a cherry on the cake. It was incredible, It was like an out of body experience.

"Emotionally, it was everything I expected," she continued. "I just went for it because the atmosphere was just incredible."

None of her rivals could better her two marks, Olympic bronze medallist Ese Brume of Nigeria taking silver with 6.85m and Britain’s Lorraine Ugen matching her 2016 bronze with 6.82m.

A month after losing his world indoor 1500m record to a seemingly invincible Jakob Ingebrigtsen, Samuel Tefera pierced the armour of the Norwegian prince of middle distance with an irresistible home straight kick.

Passing 400m in 55 and 800m in 1:53, Ingebritsen looked poised to add world indoor gold to his Olympic 1500m crown but Tefera was determined to hold on to his title, applying the last lap pressure that had the favourite buckling as the Ethiopian sprinted to victory in 3:32.77. 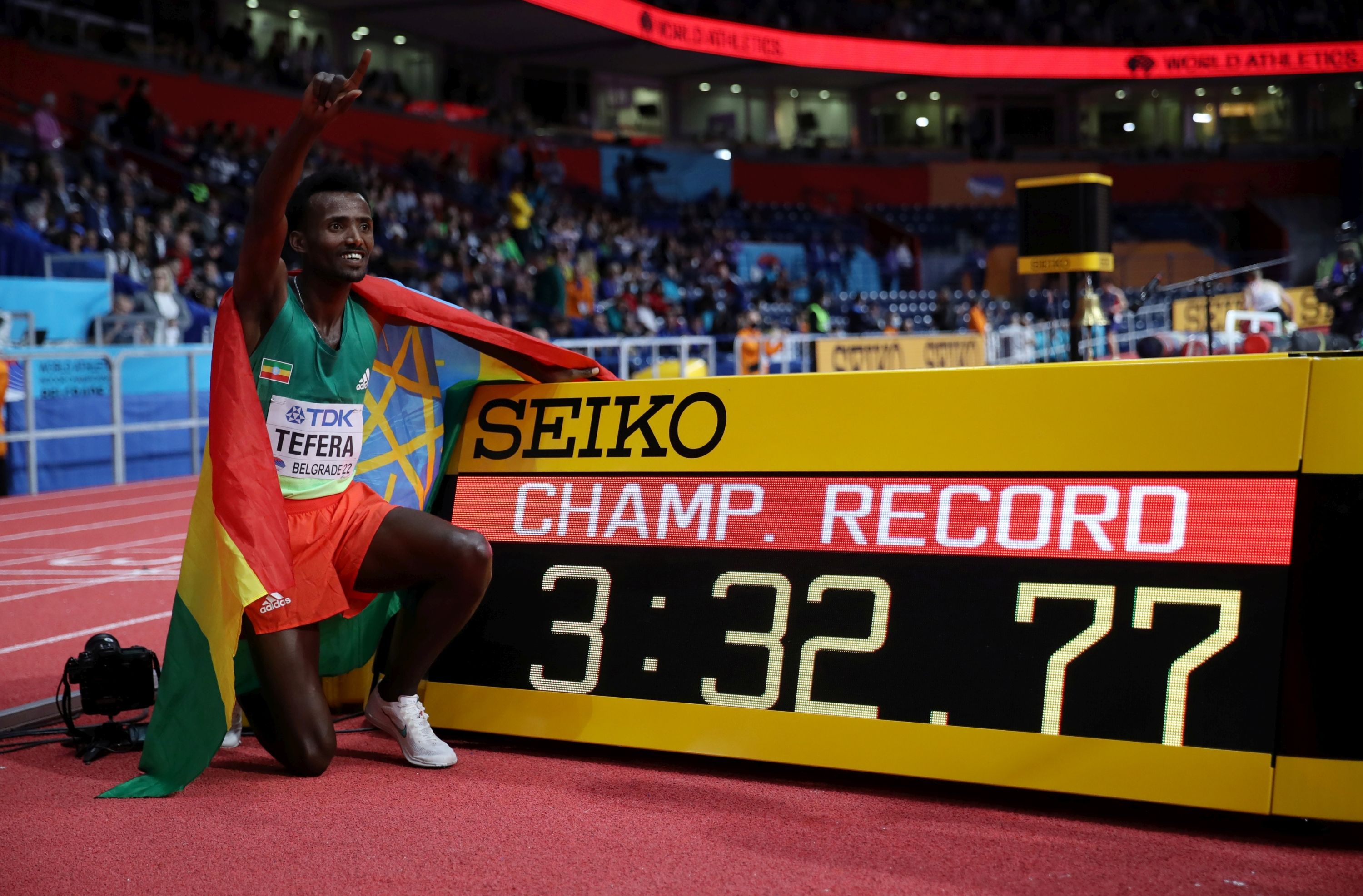 In doing so, the terrific Tefera not only completed an Ethiopian quadruple – with victories in the men’s and women’s 1500m and 3000m – but an historic first finish at the top of the medal table for the East African nation, ahead of the USA and Belgium.

He also eclipsed the championship record, 3:33.77, held by one Haile Gebrselassie.

“The race was very tough, but I feel very happy now because I became the champion,” said Tefera, who said he had surgery on his achilles tendon last year, an injury picked up during the Tokyo Olympics.

No less impressive in the women’s 800m was Ajee Wilson of the USA. Runner-up in the last two championships, she produced a devastating final lap to finish the clear winner in 1:59.09 – ahead of Ethiopia’s Freweyni Hailu (2:00.54) and world outdoor champion Halimah Nakaayi of Uganda (2:00.66).

The men’s 4x400m relay final featured no US team for the first time, Isaiah Young having limped home injured on the anchor leg in the heats in a time too slow to make the qualifying cut.

Kevin Borlee anchored Belgium to victory in 3:06.52, ahead of Spain and the Netherlands.

The Dutch took silver in the women’s final, thanks to a storming 50.26 anchor leg, as the Jamaican quartet of Junelle Bromfeld, Janieve Russell, Roneisha McGregor and Stephenie Ann McPherson powered to victory in 3:28.40. Poland finished with bronze.

Wow! That was it: three days of thrills, spills and thoroughly compelling track and field action.

Can we do all it again soon please?

Roll on July and the World Athletics Championships Oregon22. 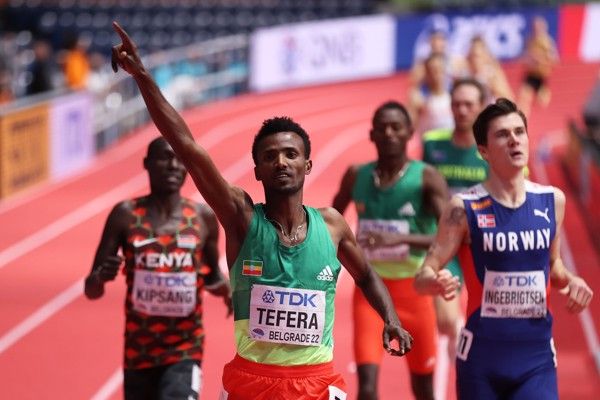 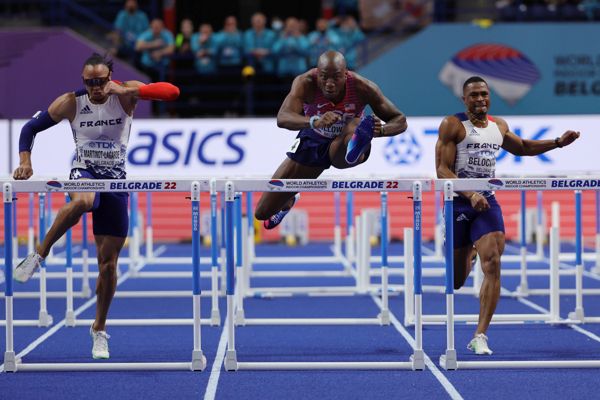 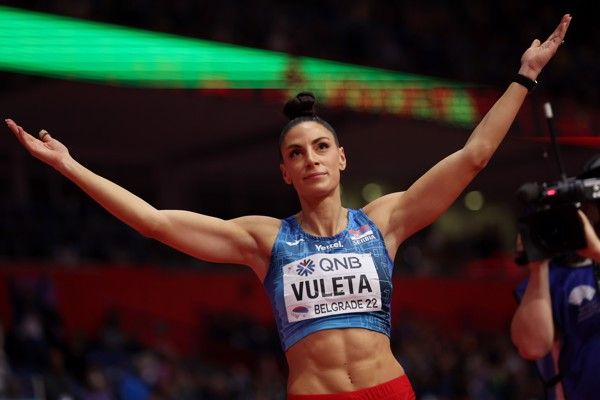 Vuleta plays it again in Belgrade with anothe... 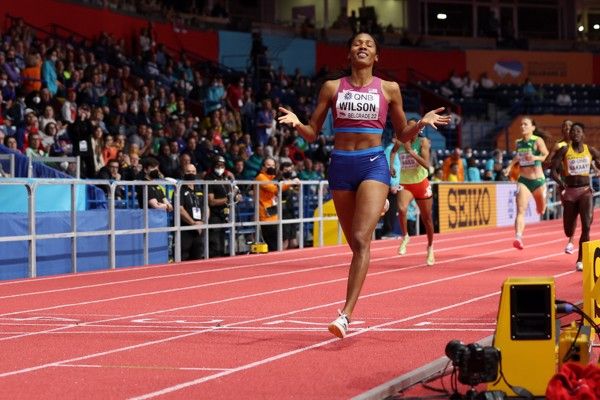 Wilson brings her A game to claim global 800m...