It’s athletics’ counterpart to basketball’s buzzer-beater. You are behind but you have the competition’s last attempt; and you then trump them all.

Carter's most gratifying moment of the night – other than the gold medal – came from the reaction of her fellow competitors, including the multiple champion Valerie Adams congratulating the 2004 world junior champion for final getting her first global title as a senior after a decade of lesser medals and top placings without ever being able to climb to the top of the podium.

“When you see somebody who always came so close,” said Carter, “and they finally accomplish what they’ve been working for – to see someone excel and break through that barrier – it’s a great moment not just for that athlete but for all of us.”

Carter has been heartened by the support of her fellow throwers. “To go back on the film and to watch it, it really filled my heart. It almost made me cry, to be honest… We encourage and push each other and that makes our group such a great group of women.”

Carter comes from one for the most prominent throwing dynasties in the USA.

Michael, her father and coach, won 1984 Olympic shot put silver as well as three Super Bowls with the San Francisco 49ers. Sister D’Andra won 2008 NCAA discus bronze while at college at Texas Tech and is preparing for the Olympic Trials.

Michael Carter’s 24.77m from 1979 still stands as the US high school boys’ record while Michelle Carter held the girls’ equivalent at 16.73m. Father and daughter share the unusual distinction of having held US high school records in the same event at the same time.

Her family was obviously thrilled with her win in Portrland.

“But honestly,” says Carter, “they were also thinking, ‘Well, it’s about time! We finally got us a gold!' They’ve been with me my whole journey and they know I’ve always been so close."

Carter was a teenage prodigy who won the world junior title at the age of 18. It has been almost 12 years since that triumph in the Tuscan city of Grosetto, but Carter – who also took the world bronze medal last year – sees all the stopping points as part of a long-term progression.

“My Dad always told us growing up, ‘Inch by inch is a cinch - yard by yard is hard'.”

The gradual changes have served her well.

She attributes her recent successes to maturity, patience, and the resolution of injury and health problems that had dogged her for years. “All these things, growing and getter better over time, have led me to this moment.”

Carter first glimpsed her future on the international stage when she was a second-year student at the University of Texas, when she won a silver medal at the US Championships.

“That’s when I decided: you can do this, you are good at it, and I really wanted to focus on it.”

Carter was named captain of the USA team in Portland by her compatriots and colleagues on the squad.

“It means a lot that my peers think so much of me that they would pick me to be their team leader,” Carter said. “I told them, ‘You’ve done the work to be here. You just have to go do what you do best.’”

She enjoyed her mentor role. “I just want to help build their confidence and calm the nerves of those doing it for the first time.”

In a week of multiple recognitions, Carter was named USATF Athlete of the Week and beat out 10 other US world indoor individual gold medallists for the honour.

Carter is well aware that she is a role model to more than just her peers. She takes her responsibility to the next generation of women throwers seriously.

Founder of the You Trow Girls Sports Confidence Camp, Carter added: “Just assess what you’re good at and how you’re built, and make it work best for you because that’s what you were created to do. I want to help young girls to have that confidence in themselves and their abilities just to be their best.”

An essential part of that confidence for Carter is her appearance. She is a makeup artist who owns a business, Shot Diva’s Makeup. “I believe when you take the time to take care of yourself and put yourself together, that helps boost your confidence.”

Now Carter’s focus has shifted to the immediate future as the US Olympic Trials and Olympic Games loom large. “Anything can happen. Everybody is working to be on that team and to win the Olympic Games. I have to bring my A game.

“It’s definitely a great confidence booster,” added Carter, looking back to Portland where she beat the best her event had to offer with the exception of Germany’s world champion Christina Schwanitz, who skipped the indoor season.

“With this championship, I didn’t worry; I wasn’t doubting myself.”

Mark Cullen for the IAAF 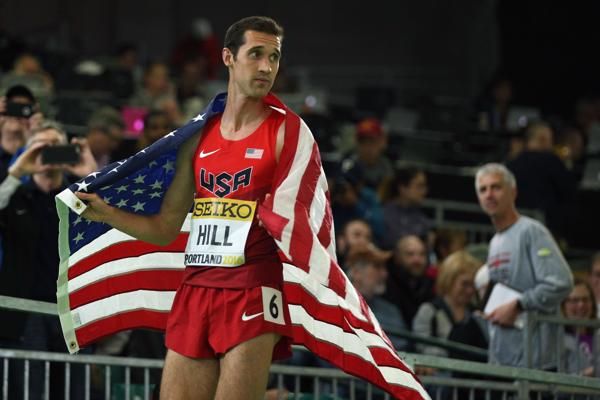 Satisfaction for Ryan Hill after winning the 3000m silver medal at the IAAF World Indoor Championships Portland 2016 lasted just a matter of moments.