As Portugal’s Pedro Pichardo awaited his score on his first triple jump attempt, he stood with his hands on his hips staring into the crowd. He sported a confident look on his face and for good reason – he had produced a world-leading jump of 17.95m.

It was only the third attempt of the triple jump competition at the World Athletics Championships Oregon22, but it stood tall for the remainder of the event.

“I opened strongly,” Pichardo said. “Since I left my residence, my mindset was focused on 18 metres. It did not come out today, but more importantly, I won gold.”

Pichardo won triple jump gold at the Tokyo Olympic Games, but the gold he earned on Saturday was his first on the World Championships stage. Prior to winning that gold, Pichardo had earned silver medals at both the 2013 and 2015 World Championships.

“This world title was elusive to me,” Pichardo said. “I had two silver medals and tried to win gold and achieved it today.”

After setting the tone with his first jump, Pichardo followed that up with a jump of 17.92m, which ended up being the second best attempt of the event.

The triple jump podium consisted of the same competitors as the one in Tokyo, where Zhu earned silver and Zango earned the bronze. That order flipped on Saturday.

Zango is one of two athletes at the World Championships from Burkina Faso. The other, Marthe Koala, did not participate in the women’s long jump. Before taking bronze in Tokyo, Zango earned bronze in Doha, where he finished behind USA’s Christian Taylor and Will Claye.

“I was motivated to win gold, but there's not much left in my legs,” Zango said. “Looking at the season, I was a bit off my regular performance. I went out there to explore. To manage 17.55m is good.”

In Tokyo, Zhu jumped a personal best of 17.57m to take the silver medal. On Saturday, he fell short of that mark by 26 centimetres on his way to earning bronze.

“I am pretty happy with the medal,” Zhu said. “However, I am not satisfied with my performance today. It was a bit below average. The preparation did not go as well as I planned.”

Italians Andrea Dallavalle and Emmanuel Ihemeje finished fourth and fifth respectively. Ihemeje, who won the NCAA title in June, entered the final round at his first World Championships in sixth place. On that jump he produced 17.14m, which vaulted him into fifth ahead of USA’s Donald Scott.

Cuba’s world indoor champion Lazaro Martinez fouled each of his three jumps, so didn’t make it through to the final trio of attempts. 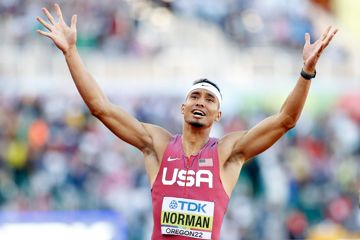 At last! Norman comes through to win first gl... 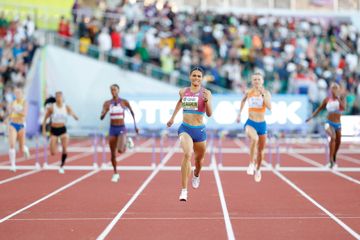 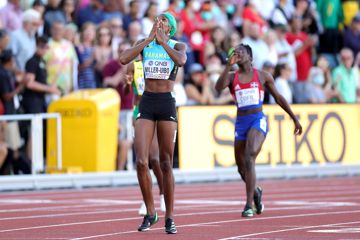