Sydney McLaughlin has done it again. For the fourth time in her remarkable 400m hurdles career, the 22-year-old has broken the world record, obliterating her previous best with 50.68 at the World Athletics Championships Oregon22 on Friday (22).

“It’s unreal,” she said trackside, with the Hayward Field crowd looking on in awe. “I just wanted to run and go for it.”

She certainly went for it. Shaving 0.73 from her previous world record, set on the same track less than a month earlier, she left her rivals – including two of the three fastest hurdlers the world has ever seen – with no response as she won her first world title in the event by more than a one-and-a-half seconds.

Netherlands’ Olympic bronze medallist Femke Bol – No.3 on the all-time list – followed her over the finish line in 52.27 to equal her season’s best, while USA’s former world record-holder Dalilah Muhammad – No.2 all time – clocked 53.13 for bronze.

It is the third world record that McLaughlin has set at Hayward Field. Her first came at the 2021 US Olympic Trials, when she clocked 51.90 to improve on the 52.16 global mark that Muhammad had achieved when winning the 2019 world title ahead of her compatriot.

Just over a month later, McLaughlin ran 51.46 to win the Olympic title in Tokyo, and she broke the record for a third time at this year’s US Championships in Eugene on 25 June, clocking 51.41.

Such is the standard, this latest world record time would put McLaughlin 19th on this season’s top list for the 400m flat. Yet the US hurdles star achieved it with 10 barriers in the way.

She reached the first of those barriers at roughly the same point as Muhammad made hers, and they remained pretty evenly matched at the second hurdle. But from that point on, the race looked like it would only be going one way.

With Muhammad to her right and Bol to her left, McLaughlin caught her compatriot along the back straight and blazed past her heading into the curve. By the time she left the bend, it was McLaughlin against the clock and time seemed to stand still as she surged ever closer.

Behind her, Bol drew level and then overtook Muhammad as they entered the home straight, McLaughlin striding away in the distance.

The question wasn’t whether McLaughlin was going to break the world record, but by just how much. With the crowd on their feet, the answer soon came as the scoreboard showed 50.68.

Now that previous world record mark of 52.34 is just 14th on the world all-time list.

“The time is absolutely amazing and the sport is getting faster and faster,” McLaughlin said of her latest performance. “Just figuring out what barriers can be broken. I only get faster from here.

“I executed the race the way Bobby (Kersee, her coach) wanted me to. I knew coming home that if I just kept my cadence and stayed on stride pattern, we could do it and it happened.

“The level in the 400m hurdles is certainly improving. We have a full group of girls that are willing to push our bodies to the next level and we are seeing times drop.”

In line with World Athletics’ commitment to further advance gender equality in the sport, the women’s world record programme in Oregon is being supported by World Athletics as part of its International Women’s Day #WeGrowAthletics pledge, and this saw McLaughlin receive a cheque for US$100,000 along with her gold medal.

Securing silver after a strong finish was Bol, and the 22-year-old was delighted to go one better than her Olympic bronze.

“I ran against the best in the world, Sydney is just very strong,” she said. “She was so far in front at the end, so I was always doubting if I really had a good race because it felt very good. Then I saw the time and I was like: ‘Wow’. It is amazing to be a part of it and to come out second in such a race.”

“I'm having mixed emotions, to be honest,” she said. “It's great to get a medal but I came into these championships on the strength of having always gotten a medal at any championships, despite any injuries. But as a competitor, you always want more.”

US athletes filled four of the top five spots, with 2015 world silver medallist Shamier Little fourth in 53.76 and Britton Wilson fifth in 54.02. 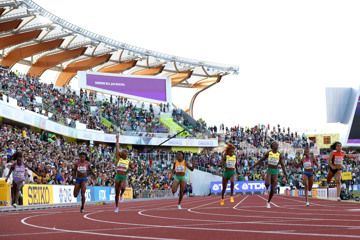 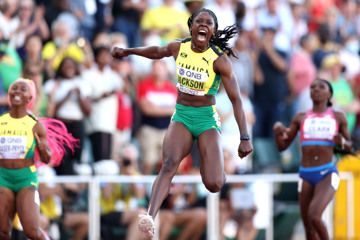 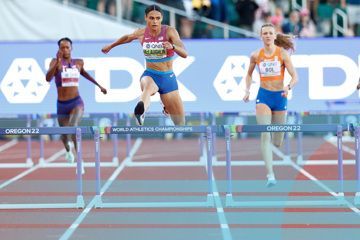