EUGENE, Ore. — With 10 days until the start of the first World Athletics Championships on U.S. soil (July 15–24), the local organizing committee (LOC) today unveiled the medals for the event.

The first medals will be won in the stadium and on the roads on the very first day of competition. On the opening night, Team USA looks to defend their world title in the mixed 4x400m relay, where a world record will likely be needed to take gold. Medals will be won in 49 event disciplines and on each of the ten days of competition, with fans able to watch finals in 12 of the 16 in-stadium sessions and in all 6 of the free road events.

"It was imperative that our medals were true to the unique, unmissable, unconventional nature of the first World Athletics Championships on U.S. soil," said Niels de Vos, Executive Director of Oregon22, LLC. "Months of cutting-edge creative thought and experimentation into the latest manufacturing techniques went into the medals, designed and fabricated right here in Oregon. The medals are won by athletes as the result of a lifetime of dedication and commitment. They are the best in the world, and our team wanted to ensure a medal which reflected that status.”

In a first for track and field, Instant Medals will be awarded to the three medal-winning athletes in the immediate moments after their finals. Full medal ceremonies with national anthems will still take place, but this additional celebratory component of Instant Medals is designed for athletes to commemorate their individual victory ‘in the moment’ and to share that moment with family and friends.

There is something uniquely powerful about the interaction between an athlete and the medal they have earned. By including the medals in the initial emotional aftermath of their medal-winning performance, athletes will be able to experience their triumph more fully, feeling the weight of their accomplishment around their necks right after earning it and proudly displaying their victory during a lap of honor and in post-event media interviews. At the end of the mixed zone interviews, the medals will be taken back from the athletes for engraving ahead of the official presentation on the podium as scheduled.

The medals depart from the traditional die-cast variety, using instead the ultra-modern and durable material of Corian, which has been subsequently inlaid with the relevant precious metal. The use of Corian enables the finely detailed carving of intricate relief work featured in the designs - something just not possible using conventional medal techniques.

While traditional in shape and weight, the medals will look very different, even down to the attachment of the ribbon, which uses a bar inserted inside the body of the medal to ensure both longevity and the maintenance of clean design lines.

One side of the medals is inspired by the cross-section of a tree, complete with seven rings to represent the seven regions of Oregon with the logo of WCH Oregon22 at its heart. The tactile experience is completed by the outer edge of each medal, which is textured to feel like tree bark. 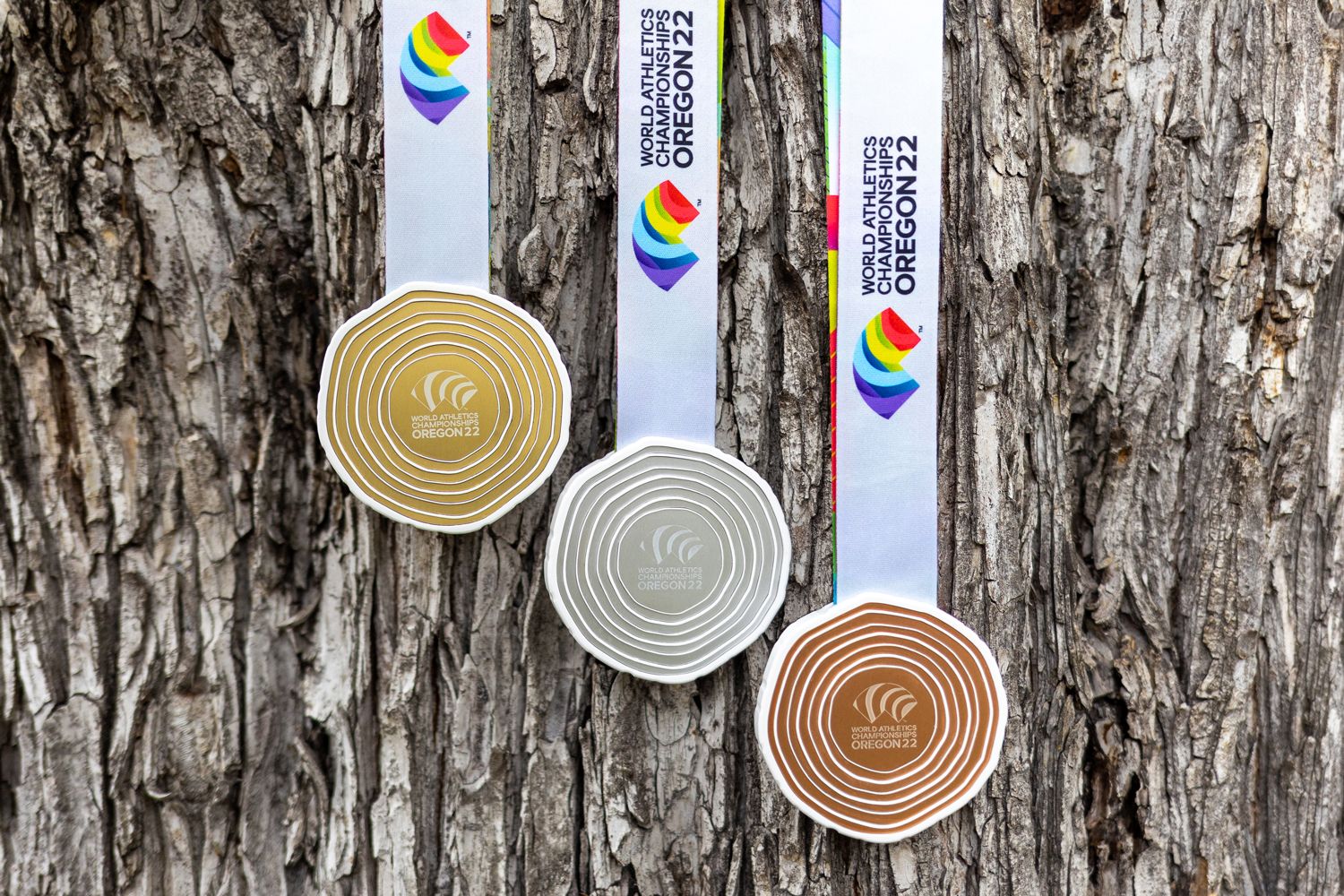 The other side features one of seven landscapes that showcase the seven regions of Oregon. These dramatic scenes carry echoes of the marble sculptures and white Art Deco facades of the great public buildings in the United States, including Oregon’s State Capitol. These landscape elements are fundamental to WCH Oregon22's brand as represented through its Oregon Tapestry. The tapestry is also showcased on the ribbon, juxtaposing a rich color palette to the immaculate, striking form of the medal. 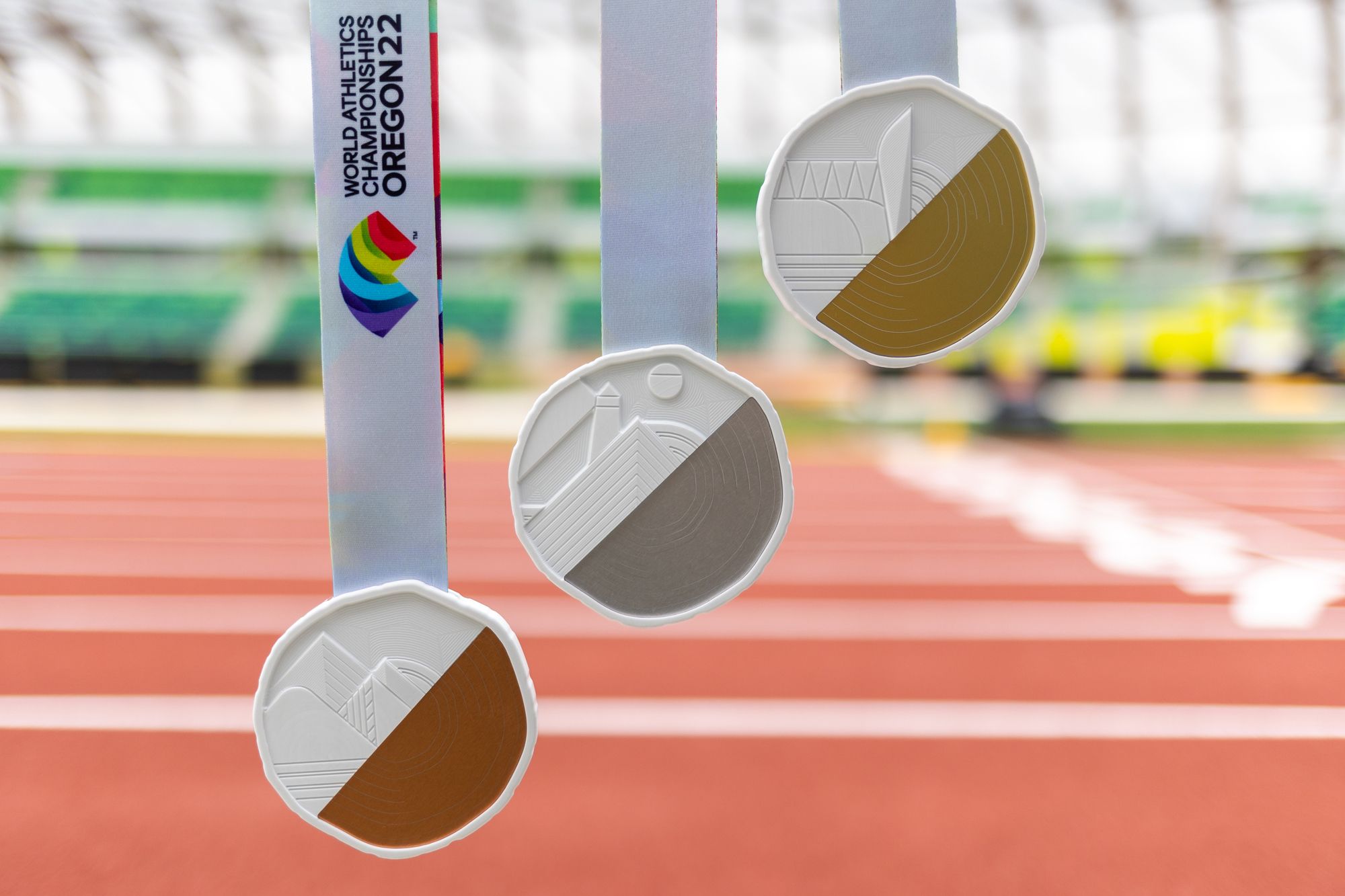 All seven regions are represented across each color of medal - so if an athlete wins multiple medals, each one can feature a different Oregon relief. This innovation of making different medals was made for two reasons.  First, to infuse each award with a sense of individuality and pricelessness - essentially, to heighten each medal moment with an opportunity for surprise and delight as the athlete discovers the distinct scene represented on their medal. Second, to highlight the beauty of the entirety of the State of Oregon, from its mountains and rivers to its coastline and forests.

"The primary goal that drove the design process was to create something truly innovative and glorious that would be immediately recognizable in years to come as Oregon's medals," said Jessica Gabriel, Communications Director of Oregon22, LLC. "We worked with Oregon-based companies to center the project in this place, and together we challenged ourselves to create works of art that would symbolize the significance of an athlete capturing the glory of a global medal here in the heart and home of track and field in the U.S."

In collaboration with the LOC, Eugene-based creative agency AHM Brands and Portland-based fabrication company Steelab executed on this lofty vision.

Tickets for WCH Oregon22 can be purchased here. The complete schedule of events can be found here. 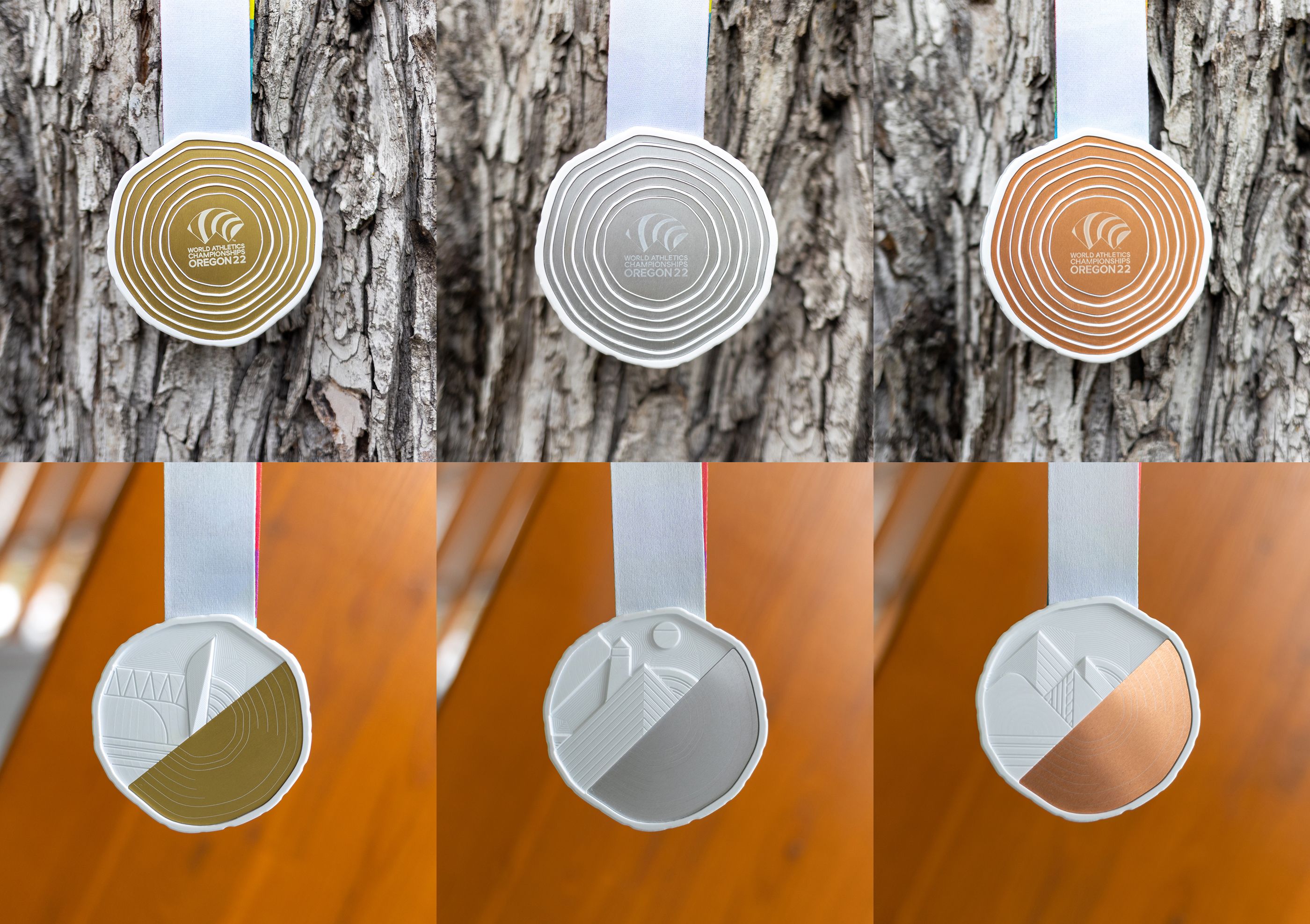 Oregon22, LLC is the local organizing committee managing the 18th edition of the World Athletics Championships. The World Athletics Championships Oregon22 will be held at Hayward Field at the University of Oregon and will be delivered in partnership with USA Track & Field. It is the first time the competition will take place in the United States, with 2,000 athletes from more than 200 nations expected to compete July 15–24, 2022. Oregon22, LLC is committed to delivering an unmissable experience that will showcase the State of Oregon and the sport of track and field globally.