Prior to the World Championships, you could have been forgiven a little for saying “Courtney who?”.

Frerichs finished 2016 not even as the second-ranked US runner in her event and was down in a modest 16th place on last year’s world lists.

Admittedly, she had been on the USA team that went to the Rio Olympic Games and did reach the final last summer but her 11th place did little to suggest she would be a medal contender 12 months later in London.

However, to paraphrase Andy Warhol’s famous saying, she chose exactly the right occasion to have her 15 minutes of fame –-well, 9:03.77 to be precise, from the sound of the gun to the moment she crossed the line-– to take a totally unexpected silver medal and slice more than 15 seconds from her best in a stunning outing over seven-and-a-half laps of the track, also moving up to seventh on the world all-time list.

“I kind of feel like I’m dreaming. Someone may need to pinch me,” said an almost speechless Frerichs in the immediate aftermath of the race.

"Sometimes I still find myself wondering if it actually happened," she later told the US media once the stunning impact of her performance had slightly subsided.

"When I looked up at the scoreboard right there at the end, I was just in complete shock. It seems too good to be true. It was just an absolutely amazing feeling.

“I felt strong throughout the race but on that last lap [just after the bell], at that point I knew I was in fifth and my mentality totally switched to ‘I didn’t come here for fourth or fifth, I’m going to do everything I can to get a medal’."

She made a quick decision to try to stay with Coburn – the US record holder prior to the London final with her time of 9:07.63, set when she finished third in Rio – and it proved to be a very wise gambit.

Coburn was having the race of her life as well and her effort had the effect of towing her compatriot through the first 300 metres of the final laps before edging away from Frerichs to win in 9:02.58, the pair leaving Kenya’s 2015 defending champion Hyvin Jepkemoi behind off the final water jump.

"She (Coburn) has obviously been very dominant in the US over the last few years, and recently established herself on the international stage, so I was really nervous about that but knew that it was a good time to put myself out there."

"It’s a scary thought to take on a group of really talented women by yourself, but when you have someone like that you trust, and you look up to that you’re doing it with, you suddenly feel like you are a greater power out there," reflected Frerichs, paying tribute to the ‘Coburn effect’.

"I didn't expect a medal at half way. Myself and Emma just worked hard and dealt with whatever tactics the African athletes threw at us. I'm so happy to have won alongside Emma. She ran an amazing race to get the championship record.

“I don’t know, I just felt like something special was happening and I just went for it in the last lap. We knew at USA’s (US Championships), we felt like the gap was closing between her and I. I think today I wanted to take a risk and go for it with her.

“We knew she was going to run smart and that she was going to handle the tactics that the Kenyans, (Ruth) Jebet and all of them put out there. I just trusted that Jerry was going to be right. He told me to trust him on this one. He hasn’t failed me yet, so I did.”

"I felt like the crowd gave me a lot of energy and lifted me to my greatest ever performance. I would never have believed this could happen. Maybe fifth or sixth, but silver? Wow!”

Frerichs hails from the small Missouri town of Nixa but is now based on the US west coast in Portland, Oregon, after having joined the heralded Bowerman Track Club at the start of the year.

“There’s been a lot of ups, there’s been a lot of downs,” admitted Frerichs in a post-championships interview with the US magazine Track and Field News. “In February, I actually started to question everything, whether I even made the right decision.

“I was super happy with the coaching but I was in Portland, I was alone, and it was raining. The move was a bit tough. There wasn’t a lot of sunshine.

“But two weeks in February were huge to my transition. I was able to realise how far I’d come by working out alone, how I was doing workouts that didn’t even compare to what I was doing a year ago.”

Even if sunshine is still a rare treat in her adopted hometown of Portland, she can still bask in the silver rays glinting off her medal from London.

BACK
Pages related to this articleAthletes
Courtney FRERICHS 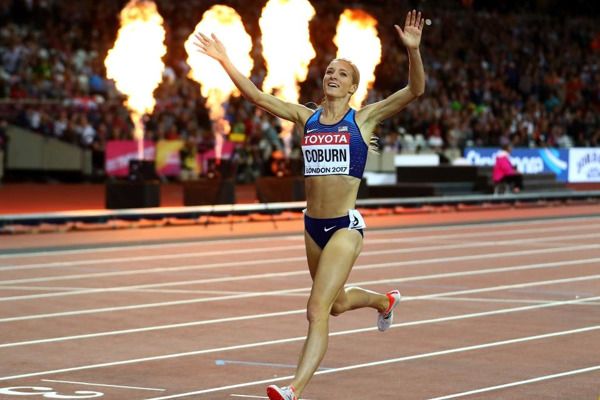