No less than 10 gold medals were decided on day four of the World University Games with the hosts Russia taking half of them in Kazan on Wednesday (10).

However, the plaudits for the best performance went to South African sprinter Anaso Jobodwana who added to his 100m title when he sped to the 200m crown in 20.00.

The 20-year-old student at Jackson State University in the USA will be mildly frustrated by the fact that the wind reading was 2.4 metres-per-second, but even though the breeze was too strong for record purposes, it didn’t invalidate what a fine run it was.

Jamaica’s Rasheed Dwyer and Japan’s Shota Iizuka were second and third in 20.23 and 20.33 respectively.

The first final of the afternoon was the women’s Hammer and the USA’s American collegiate (NCAA) champion, Jeneva McCall, clinched her global title with her third-round effort of 73.75m.

Russia’s 2013 world leader Oksana Kondratyeva had to be satisfied with silver with 72.22m while Moldova’s 2011 World University Games champion Zalina Marghieva was unable to defend her title and finished third with 71.10m.

In the morning, Russian athletes achieved a clean sweep in the women’s 20km Race Walk.

The four Russians were packed together right from the start onwards and never let the other competitors come near.

After the disqualification of former World record-holder Vera Sokolova, Anisya Kirdyapkina took the gold medal in a World University Games record of 1:29:30, Irina Yumanova passed the line second in 1:30:41, with Lina Bikulova a distant third in 1:32:30.

Russia easily were the winners of the team title.

Russia’s Dmitry Tarabin put all his energy into the first attempt and his 83.11m was enough for the gold and make it a husband-and-wife double after his spouse Mariya Abakumova won the women’s title on Tuesday.

A surprising winner in the men’s 400m Hurdles was Slovakia’s Martin Kucera. With a fifth place in Tuesday’s semifinal, he only just scraped into the final. Coming into the home straight, and running in lane one, he was near the back of the field but in the last 100 metres he overtook the complete field before finishing in a personal best of 49.79.

Finland’s Hanna-Maari Latvala, who entered the competition with a season’s best time of 23.62, had the best start of the field in the 200m final and kept her lead until 40 metres before the end, when she was overtaken by Kimberly Hyacinthe.

The Canadian took the gold in a personal best of 22.78 while Latvala broke the 23-second barrier for the first time by clocking 22.98 for the silver medal.

USA’s Vashti Thomas won the 100m Hurdles in a super-quick 12.61. She had by far the best start and kept her advantage the whole race. She broke the World University Games record of Poland’s Lucyna Langer, set in 1979 at altitude in Mexico City, by 0.01.

Russia’s two-time World University Games champion Alexandra Kiryashova could go no higher than 4.20m in the Pole Vault, which placed her seventh and opened the door for her compatriot Anastasia Savchenko to take her title.

Savchenko cleared all her attempts up to and including 4.60m on her first attempt before three failures at a World University Games record-equalling height of 4.70m.

The last event of the day was the women’s 3000m Steeplechase and Russia’s Olympic and World champion Yulia Zaripova typically went into the lead straight from the gun.

She won in a European-leading time of 9:28.00 and finished more than 12 seconds ahead of her nearest rival.

Russia’ 2011 World champion Tatyana Chernova is the overnight leader in the Heptathlon with 3861 points, only 66 points shy of her day-one total when she took the world gold in Daegu, and 167 points ahead of Czech Republic’s Eliska Klucinova.

Latvia’s Laura Ikauniece is just 24 points behind Klucinova and the gap between places two and five is only 80 points so, barring Chernova having a disaster, an interesting battle for silver and bronze can be expected. 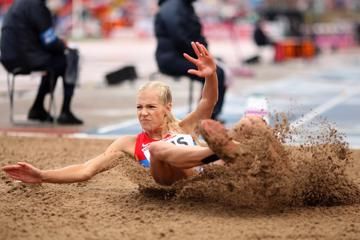 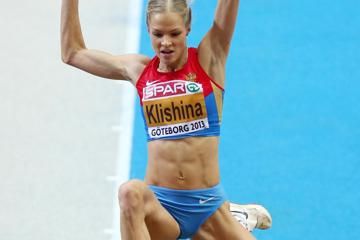 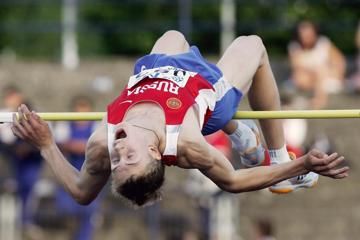