My best achievement in track and field

I think what I'm most proud of is when Carl Lewis went out to a windy 8.91m in round four at the 1991 World Championship and I was sure I was going to go to past him. I didn't flinch. I said to myself 'I'm going to beat that.' I'm proud of that moment because that's what champion athletes are made of. (Mike leapt his world record 8.95m in round five).

The 1992 Barcelona Olympics. It still stings to this day. I wanted to win gold so bad. I was at the top of my game. I enjoyed the best warm up in my life and I thought I was going to break the world record, but 45 minutes went by between the warm up and the start of the competition.

Unusually, they brought us back inside after warm up and my body started to crash and fall asleep. I jumped 7.95m with my first jump, then 8.22m and 8.33m in rounds two and three. I fouled in round four and then went 8.53m and 8.64m with my last one (Carl Lewis won gold with 8.67m). If I had one more jump I would have won, I'm sure of that. I learned an important lesson that day, don't leave your best performance on the warm up track.

Willie Banks (the former world triple jump record holder). He was my motivation for competing in athletics. I first saw him compete at the USC versus UCLA competition on TV when I was aged 12. He was a freshman and he broke the national record. From that moment, I thought I'm going to go the Olympics like that guy.

Years later we ended up becoming training partners and best friends. Willie showed me a lot about being responsible, and he also showed me the dedication it takes to become a world record holder.

My best piece of advice

Just to have fun and enjoy it. We are so lucky to be doing what we do. We get to travel the world, a sponsor gives you free gear and you get to make some money out of the sport. If that is your job then that is a blessing so go out, enjoy it and have fun because you could be sat behind a desk doing something that you don't like doing.

Towards the end of my career, for sure it was Carl (Lewis), although there was not much of a rivalry between us at the beginning. I took me a long time to close the gap and the first time I really challenged h m was at the 1991 US Champs.

Before then, my main rival was Larry Myricks (a two-time world indoor champion and 1988 Olympic Games bronze medallist). People don't mention his name enough but he could have been a world record holder. He was always capable. I lived near where Larry trained and he was one of my idols. Before I even got to Carl, I needed to beat Larry first.

My arch nemesis are potato chips. I love them so much. For me, salt is like my sugar. I love food, but I found out when I got to 112kg I can be fat too. I'm now down to 82kg. It is all about good discipline and making good choices.

Maybe having a little too much fun. I could have been more committed throughout my career. I was so blessed with a lot of athletic ability that many things came easily to me. Okay, there is no problem having fun but maybe I should have chosen to come home at midnight rather than 3am. I was a young guy with money hanging out in Europe. I was going to have some fun.

Jackie Joyner-Kersee because she was so good at so many things. She was a top basketball player at UCLA. She is still world record holder at the heptathlon and number two all-time in the long jump. She was a world-class 200m sprinter, high jumper and 100m hurdler, and she is also the nicest person you will ever meet. I learned so much from her and being around her. She is how a champion is supposed to be and that's why I hold her in such reverence.

I love Modesto in California. It is always hot, with a tailwind and the runway is front of the stand. I jumped 8.90m (windy) there in 1992. I liked to jump there every year. It was like a home to me.

Being a dad to three daughters; Micha, 20, Carlee 11 and Macie,10. They are the joys of my life and the best thing that ever happened to me. Even today, my daughters are a huge motivation for me. 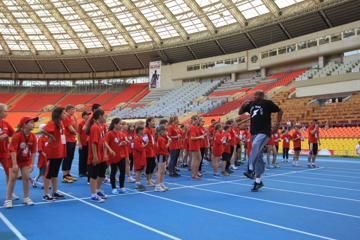 Mike Powell returns to Moscow for another Mas...