World leads by Lavillenie in Metz and Lendore, Duncan and Dendy in Fayetteville

Renaud Lavillenie in action in the pole vault (© Jean-Pierre Durand)

In his final competition before the defence of his European indoor title, Olympic champion Renaud Lavillenie gave himself the perfect confidence-booster at the National Indoor Meeting in Metz on Sunday (24).

Not only did he extend his 2013 winning streak to eight competitions, but his winning clearance of 5.94m was the fifth time this year he has set a world-leading mark.

He cleared each bar at the first time of asking, up to and including his winning height. He came close to clearing 6.00m to round off the competition, but he was more than satisfied with his victory.

It was a good day all round for the Lavillenie family as his younger brother, Valentin, smashed his PB to finish third with 5.70m, the same height as Konstadinos Filippidis in second place.

The men’s Shot proved to be the best event at the Balkan Indoor Championships in Istanbul on Saturday (23). Serbia’s Asmir Kolasinac came close to breaking his own national indoor record on each of his three valid attempts – 20.54m (twice) and 20.48m.

All three throws were easily enough to win, but in a quality competition six men broke 19 metres. Hamza Alic of Bosnia-Herzegovina was second with 19.87, just nine centimetres ahead of Bulgaria’s Georgi Ivanov.

Among the few victories by hosts Turkey, the best performances came from Ilham Tanui Ozbilen in the 1500m (3:37.49) and Nevin Yanit in the 60m Hurdles with a 7.98 national record. A national record was also set by Serbia’s Ivana Spanovic in the Long Jump, which she won with 6.73m.

It was a busy weekend of conference championships for US collegiate athletes, and no less than four world-leading marks were set across the various meetings.

The South Eastern Conference Championships, held this weekend in Fayetteville (22-24), played host to some speedy two-lap races. Deon Lendore, who anchored Trinidad & Tobago to Olympic 4x400m bronze last summer, smashed the 45.91 PB he set last month to set a national record and world-leading time of 45.15 in the heats of the 400m.

The 20-year-old backed it up in the final with a 45.23 clocking, with Hugh Graham setting an outright PB of 45.67 in second place.

Two-time NCAA champion Kimberlyn Duncan scorched to the fastest indoor 200m performance in the world for five years, winning with 22.54 to go to sixth on the US indoor all-time list. Ashton Purvis was second in 22.70.

Perhaps the most surprising performance of the meeting came from Marquis Dendy. The 20-year-old had only once before broken eight metres in the Long Jump – at this same meeting last year, in fact – but he flew way out past that mark with a world-leading 8.25m; the best indoor performance by an American long jumper for nine years.

Other good performances from Fayetteville included a 7.54 victory from Eddie Lovett in the 60m Hurdles, Regina George’s 51.40 win in the 400m, and a national record in the Pentathlon by Makeba Alcide of St Lucia with her score of 4569.

Just as notable was the third-place finish of Olympic High Jump bronze medallist Derek Drouin. He scored a very respectable 5817, which included a 2.30m leap in the High Jump – the highest ever jump within a combined events competition, indoors or out. His score puts him at fourth on the Canadian all-time list.

At the same meeting, Casimir Loxsom produced the fastest time ever by an American for the indoor 600m with 1:15.41, although it was set on an oversized track.

World leader Brianna Rollins posted the second-fastest time of her career in the 60m Hurdles at the ACC Championships in Blacksburg, Virginia. Her winning time of 7.90 was just 0.12 shy of the PB she set last month. 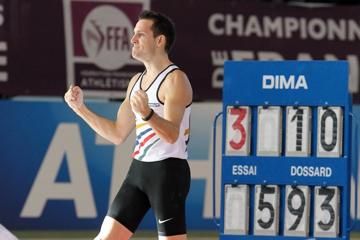