Warner and Vetter prevail in Talence

Damian Warner and Anouk Vetter prevailed at the 41st edition of the Decastar in Talence, France, on Sunday (17), the last competition of the 2017 IAAF Combined Events Challenge.

Warner tallied 8252 points to win his second Combined Events Challenge meeting of the season, following his victory in Götzis in May. It was also his second Decastar win after 2013. Above all, the Canadian managed to bounce back after his fifth-place showing at the IAAF World Championships London 2017 where illness had prevented him to reach his full potential.

“In London I was unable to perform at my best, so I decided to come here and compete. I’m happy I was able to finish my season with the win,” said Warner, whose performance in Talence propelled him to the runner-up position in the 2017 Combined Events Challenge standings and the US$20,000 that comes with it.

He needed to score 8692 – three points shy of the personal best of 8695 that pushed the Canadian to silver at the 2015 World Championships – to overtake Rico Freimuth of Germany, who takes the challenge title as well as the US$30,000 first place prize.

The 110m hurdles, the opening event of the second day, saw Warner increase his lead. Despite rainy conditions with a temperature of about 12C, Warner won his heat in 13.81 (-0.5m/s), the fastest time of the day, to extend his lead to 190 points over Ukraine’s Oleksiy Kasyanov, who finished second in 14.21.

Kasyanov produced the farthest throw in the discus, courtesy of a 46.99m toss, and reduced the gap to 122 points. Warner reached 42.70m, just ahead of Kazmirek (42.55m) while Czech Adam Sebastian Helcelet moved up to fourth place overall following a 44.04m effort, the third best mark of the field.

In the pole vault, Warner easily topped his first height at 4.35m to ensure points. He later needed three attempts to clear 4.65m before failing at 4.75m.

As usual in Talence, Eelco Sintnicolaas produced the best performance with 5.35m, moving him from eighth to fourth overall.

Warner maintained his overall lead in the javelin, going into the final event with a comfortable margin of 231 points over Kasyanov. The Canadian then closed with a 4:40.87 in the 1500m to secure the victory.

“I’m a little bit tired,” he said, smiling. “I think at this kind of competition, late in the season, it’s not necessarily about the score; it’s about just coming out here and to finish the best that you can.”

Kazmirek finished second with 8020, just four points ahead of the double Decastar winner Kasyanov, who faded in the javelin.

European champion Anouk Vetter began day two with a 50-point lead over Yorgelis Rodriguez. The Dutchwoman’s best of 6.18m in the long jump saw her cement her position while Rodriguez had to settle for 5.92m, a leap well short of her season’s best of 6.50m.

That performance saw her slip back to third, 13 points behind Hungary’s Xénia Krizsan who moved up following a second-round effort of 6.03m.

Defending champion Nadine Broersen failed to record a legal leap and subsequently dropped out. It was the Dutchwoman's third incomplete heptathlon of the season, following withdrawals in Götzis and at the World Championships.

World bronze medallist Vetter, who was third in Talence two years ago, followed her path in the javelin, producing the farthest throw with 52.49m. Thanks to a 50.49m effort, Krizsan clung on to second overall ahead of compatriot Györgyi Zsivoczky-Farkas, whose 47.29m moved her to third ahead of Rodriguez (44.13m).

“I’m really happy with that win. It was a tough competition,” said a beaming Vetter, who took second place in the overall challenge standings behind Carolin Schäfer. “The first day was ok but on the second I was counting event after event. The crowd was fantastic, the people were so friendly. I really enjoyed it.”

Zsivoczky-Farkas was injured about 300m into the race and was forced to withdraw, leaving third place overall to Rodriguez (6126), who also placed third in the challenge overall.

BACK
Pages related to this articleAthletes
Anouk Vetter 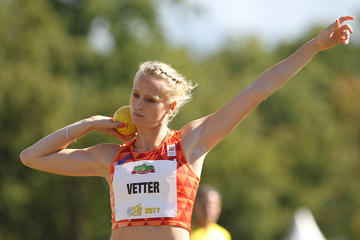 Warner and Vetter the overnight leaders in Ta...