Ecuador's Angela Tenorio in action in the 200m (© Getty Images)

The 17-year-old, who won 100m bronze and 200m silver at this year’s IAAF World Youth Championships, was the star of the event in spite of being pushed by a strong breeze to her 100m and 200m victories.

Tenorio made history by becoming the first Ecuadorian athlete to win the 100m-200m double at the South American Junior Championships and she also added the 4x100m crown with a national senior record of 45.53.

“I’m very happy for all my victories, but especially for the one in the relay,” said Tenorio, who is coached in Guayaquil by Cuban Yosvania Molina. “We had a very long trip to Resistencia (22 hours), but it was worth it.

“The season has been very positive for me. I competed at my first World Championships and brought back home two medals, which was a great feeling. I was very inspired by my family and my whole country; I just want them to be proud of me. On the final day I felt a bit tired in the 200m. Now I have to rest and get ready for the Bolivarian Games.”

Another Donetsk medallist, Brazilian Vitor Hugo dos Santos, who took World Youth silver in the 200m, won his event in 20.74 and added the 4x100m title with 40.32.

Both Tenorio and Dos Santos represent South America’s best hopes of medals at the 2014 IAAF World Junior Championships, which will take place in Eugene, Oregon.

Records on the infield

The other area record was set on Saturday by 19-year-old Colombian Mauricio Ortega in the Discus. Ortega’s winning mark of 62.78m came on his first attempt, following it up with a foul then throws of 61.34m, 60.56m and 62.42m. The previous mark of 62.29m belonged to Brazilian Gustavo de Mendonca, set in 2003.

“It’s a good way to say farewell to the junior age group; bigger challenges are waiting for me,” said Ortega, who was born in Apartado, Antioquia, the same town as World Triple Jump champion Caterine Ibarguen.

“She is a real inspiration for all of us; she was shown the way to the top for all Colombian athletes,” added Ortega, who finished fourth at the 2011 World Youth Championships and ninth at the 2012 World Junior Championships.

Four more championship records were bettered on the recently inaugurated track, located in the capital of the Province of Chaco, northeast of Argentina.

Brazilian Thiago do Rosario won the men’s in 1500m 3:48.42, Peru’s Zulema Arenas won the women’s 3000m Steeplechase in 10:33.66, Brazil’s Izabela da Silva took gold in the women’s Discus with a national junior record of 55.88m and Uruguay’s Maria Mello triumphed in the women’s Javelin with 50.27m, a national record and the first ever throwing title at the championships by a Uruguayan athlete.

BACK
Pages related to this articleAthletes
Mauricio ORTEGA 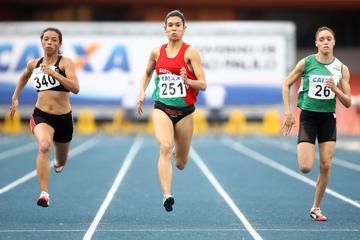 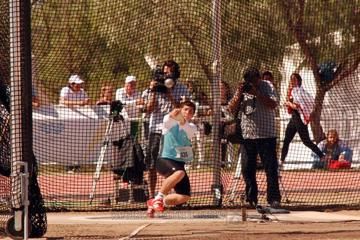