It took Germany's 2010 European champion Linda Stahl a couple throws to get in the swing, but when she finally did, she was able to score her first victory of the 2014 IAAF Diamond League season with a world-leading mark of 67.32m in the women's javelin at the adidas Grand Prix on Saturday (14).

Unlike Kathryn Mitchell of Australia, who took the early lead with a 66.08m on her very first throw of the competition, it took Stahl until round three to launch the spear more than a metre past Mitchell's mark, taking the world lead from Mitchell’s compatriot Kimberley Mickle, who threw 66.83m in Melbourne in March.

"I am very satisfied with the personal best today," said Stahl. "I came in a little tired with three competitions in the last week but felt great after warm-ups. My first throw was a season's best and I knew it was not a perfect throw, so it progressed from there."

In 2011, Fabiana Murer of Brazil cleared 4.85m to win gold at the IAAF World Championships in Daegu, and that was the last time she jumped 4.80m.

The 33-year-old turned back the clock, clearing 4.80m on her first attempt to win the women's pole vault and establish a world-leading mark.

"It felt very good," said Murer. "I had really good training before coming here and this is the first time that I have jumped this high in three years. Since Daegu, I have always had some problems with the training or some little injuries, but today we had good weather and I took the chance. I'm very happy."

Jamaicans Warren Weir and Nickel Ashmeade provided a sprint thrill to the Jamaican faithful that made up most of the crowd in Icahn Stadium on Randall's Island.

Running into a slight headwind, Weir blazed to victory in a world-leading 19.82, dipping at the line to edge Ashmeade who was second in 19.95. The two are now tied for the Diamond Race lead with six points.

"I am feeling good," said Weir. "I'm extremely happy with today and proud to come out here and compete in front of this great crowd. Not only are Jamaicans great, but everyone is."

Puerto Rico's Javier Culson fought through a stiff wind on the backstretch to make up the stagger early and then held off three season-best performances coming down the final straight to win the men's 400m hurdles in 48.03.

Diamond Race leader Michael Tinsley of the US was second in 48.56, followed by Cornell Fredericks of South Africa in 48.58 and two-time Olympic champion Felix Sanchez of the Dominican Republic in 49.09.

Looking to build back his fitness after spending almost all of the summer of 2013 on the sidelines, Kenya's David Rudisha scored his first victory of the season in the men's 800m, clocking a season's best of 1:44.63.

The world record-holder, who injured his right knee jogging in Central Park before this meeting last year, recovered from an awkward cut-in to get behind pacer Daniel Dey, who brought him through 400m in 50.48.

Unlike in Eugene, where he faded badly off the final bend, Rudisha maintained his lead throughout.

"The race went well," he said. "It was windy so it was hard for us and our rabbit, but I'm glad to be back in New York after competing well here two years ago. The racing is good here and the crowd is great."

Valerie Adams of New Zealand extended her remarkable winning streak in the women's shot put to 50 consecutive meetings, winning with a fifth-round effort of 19.68m.

The victory was a bit different than her usual dominating performances, however. She actually trailed USA's Michelle Carter, who opened with 19.51m, for three rounds.

Adams edged into the front on her fourth throw, which measured 19.52m, before gaining a bit more distance in the next round.

"Keeping my streak going today was awesome," Adams said. "Training has been going great. There have been some days where there's aches and pains, but that's just being an athlete. This was a really good class of throwers today so they kept me accountable, really kept me on top of my game. But I'm glad I could grab a win today."

Nobody in the crowd was surprised to see a Jamaican win the men's 100m, a non-Diamond League event. They were probably a bit shocked, though, at which one prevailed.

Nesta Carter got out fast and then brought home the victory in 10.09. 2011 world champion Yohan Blake, one of the headliner athletes on the bill, could not recover from the second-slowest reaction time (0.209) and wound up second in 10.21.

"It was a good race with a strong wind," Carter said. "It is always good to compete well here in New York in front of this great crowd."

"First of all, great race to Nesta Carter," Blake added. "He's been running well recently and deserves to win a race like this. I just need to work on my start. I cannot make mistakes like that at these big meets. Bad starts are frustrating. It's just something I have to work on."

The women's 100m hurdles unfolded as an all-American affair as expected with Queen Harrison taking the victory in 12.62 and the Diamond Race lead with five points.

"It feels great to come out here, compete well, and win," Harrison said. "I have been racing a lot so it's nice to come away with a win."

Two-time Olympic medallist Dawn Harper Nelson was second for the second straight meet in 12.63 while Lolo Jones, racing in her first IAAF Diamond League meeting of the season after competing at the Sochi Winter Olympic Games as a bobsledder, was third in 12.77.

US upstart sprint sensation Tori Bowie continued her IAAF Diamond League success in the sprints, winning her third consecutive race and second in the 100m, this time in 11.07, just 0.02 off her personal best set in Rome just over a week ago.

Bowie, who leads the 100m Diamond Race with eight points, also won the 200m in Eugene.

In the women's triple jump, Jamaica's Kimberly Williams reached a slightly-wind-aided (2.1m/s) mark of 14.31m on her second attempt of the competition to score her first IAAF Diamond League victory of the season. 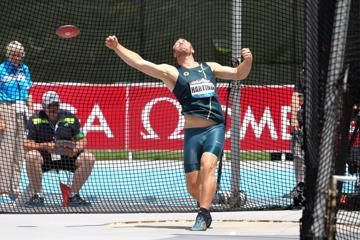 Harting in a hurry but grabs New York meeting... 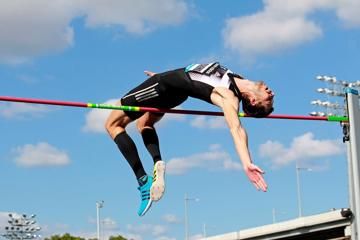 Bondarenko and Barshim both clear 2.42m in Ne...