Among a plethora of world-leading U18 performances at the inaugural European Youth Championships, the undoubted highlight was Alina Shukh’s heptathlon world U18 best at the four-day event in the Georgian capital Tbilisi, which ended on Sunday (17).

Following her score of 6079 set last year, and some stunning performances in individual disciplines this summer, there were high hopes that Shukh could string together enough points across the seven events to make that mark history.

However, there was no room for faltering because there was the likely prospect that she would be challenged hard by Austria’s Sarah Lagger, who beat her to the silver medal when Shukh had to settle for the bronze at the IAAF World Youth Championships Cali 2015.

In the end, just 11 points divided the pair as Shukh scored 6186 while Lagger finished second with 6175.

Both athletes surpassed the previous best ever mark in the heptathlon with youth implements, which belonged to Shukh at 6079. But Shukh's score will also count as an outright world U18 best as it is higher than the 6185 scored by China's Shen Shengfei in the senior heptathlon back in 1997.

Shukh produced the best performance of the first day with a 1.88m high jump to move into the lead after two events, and she continued in front with a 14.85m shot put. But Lagger clawed back the gap with a big personal best in the shot with 15.06m before finishing the first day with 24.92 in the 200m to finish nearly two seconds up on Shukh.

Lagger held pole position overnight with 3623, just ahead of Shukh with 3588, but the latter regained the lead by 30 points with a 50.04m throw in the javelin.

Another world U18 best almost fell in the penultimate event to be completed when Greece’s Emmanouil Karalis had a close third attempt at 5.56m, a one-centimetre improvement on the mark he vaulted at the IAAF World Challenge meeting in Ostrava in May.

Although he failed at that height, he was nevertheless a convincing winner, flawless up to and including his winning height of 5.45m, with Germany’s Bo Kanda Lia Baehere equalling his personal best to take the silver with 5.30m.

Karalis, like a number of winners in Tbilisi, will now make the trip halfway across Europe to compete at the IAAF World U20 Championships Bydgoszcz 2016 this coming week.

Among the other winners trying to succeed at back-to-back championships will be the Moldovan thrower Alexandra Emilianov.

A winner of the world U18 title in Cali last summer, she added more than two metres to her discus best when she threw a world-U18-leading 58.09m on Friday, the best throw by a European girl since 1987.

For good measure, she took the shot title on Saturday, adding exactly a metre to her shot best with a world-U18-leading effort of 18.50m in the fourth round of what many consider her ‘second event’.

Another double in the girls’ events was notched up by the prodigiously talented 15-year-old Swiss runner Delia Sclabas, who will still be eligible to compete at the IAAF World U18 Championships Nairobi 2017.

On Friday, in the girls’ 3000m, Sclabas slashed her best by more than seven seconds to win in 9:23.44 after a devastating change of gears over the final 200 metres.

In the 1500m on Sunday, she waited a little longer but outsprinted the prohibitive favourite, Great Britain’s Sabrina Sinha, down the home straight before stopping the clock in another personal best of 4:22.51, with the Briton second in 4:23.10.

Havryliuk gets the Midas touch

Myhailo Havryliuk had to settle for the silver medal in Cali last summer but the Ukrainian went one better in Tbilisi, winning the hammer with a lifetime best and world-U18-leading mark of 82.26m to move up to 10th on the world U18 all-time list.

Another revision in the U18 all-time lists came in a high-quality girls’ javelin which saw Norway’s Arianne Duarte Morais throw a European U18 best and world-U18leading 60.89m, which also moved her up to third place on the world U18 all-time list for the 500g implement which has been in use since 2013.

Portugal’s Marisa Carvalho ran 13.07 in her 100m hurdles semi-final for a European U18 best, which earned her fifth place on the world U18 all-time list.

Unfortunately, Carvalho, who was later in the championships to get a bronze medal in the long jump, hit several hurdles midway through the final and eventually stumbled home last as a surprise victory went to Italy’s Desola Oki in 13:30.

Five other world-leading U18 marks were set: Germany’s Lukas Mihota twice improved his personal best and won the boys’ high jump with 2.18m, Greece’s Odissefs Mouzenidis – another winner who will compete in Bydgoszcz – improved his personal best by 10 centimetres to win the shot put with 21.51m while Germany’s Manuel Wagner finished first in an enthralling boys’ decathlon with 7382.

In the girls' events, Denmark’s Anna Mark Helwigh defied conditions during the 2000m steeplechase which saw the temperatures soar to over 30C and improved her own personal best and world-U18-leading mark by more than six seconds when she romped away from her rivals with two laps to go before winning in 6:34.52. Turkey’s Meryem Bekmez won the first gold medal of the championships on the opening morning when taking the girls’ 5000m race walk title in 22:50.22.

BACK
Pages related to this articleAthletes
Alina SHUKH 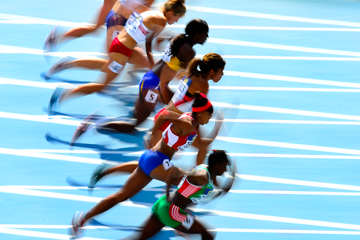 Bydgoszcz set to host one of the biggest ever...