Geoffrey Kamworor ran the quickest 10,000m time ever recorded in Kenya on Friday (18), clocking an all-comers' record of 27:01.06 at the Kenyan Championships in Nairobi to secure his Olympic team place for Tokyo.

On the second day of action at the Kasarani Stadium, the three-time world half marathon champion – who has made a comeback from the injuries he sustained having been hit by a motorcycle while training last year – achieved the “statement victory” he had been seeking.

A trio of Kamworor, Rodgers Kwemoi and Rhonex Kipruto had broken away from the rest of the field and with the top two securing Olympic selection, it seemed like the battle was on. But world 10,000m medallist Kipruto dropped out with around four laps remaining, leaving Kamworor and Kwemoi to race for the title.

Kamworor was ahead at the bell and as he went wide around the lapped runners, the gap continued to grow and he waved to the stands on his approach to the finish line.

Finishing second to claim his Olympic place, world fourth-placer Kwemoi also went sub-27:09 and clocked 27:05.51, while Weldon Kipkirui Langat came through for third in 27:24.73 to achieve the Olympic qualifying time of 27:28.00. 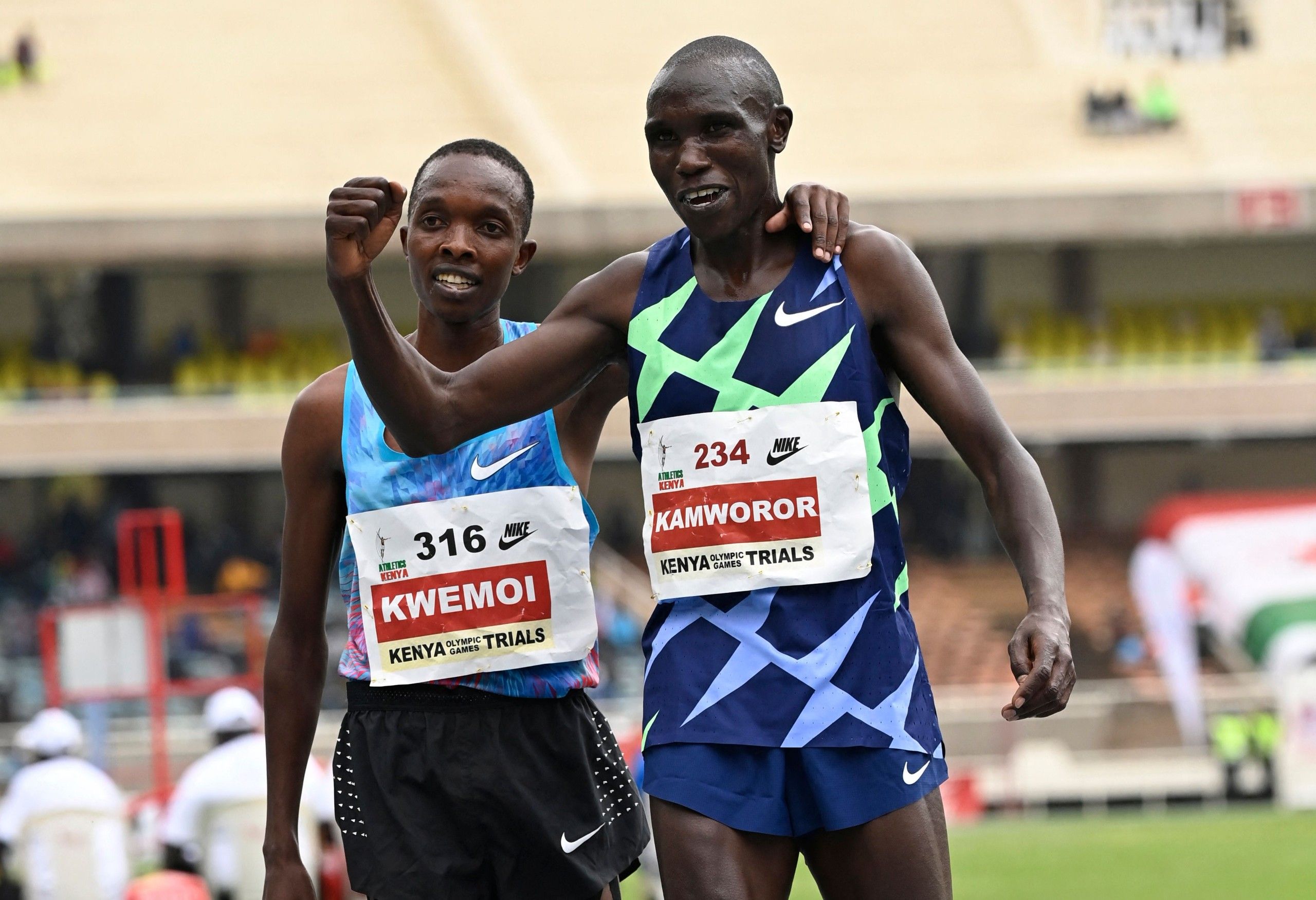 “I needed a statement victory because I have had several challenges in the past year,” said Kamworor, who went on to explain the influence of Olympic marathon champion and world record-holder Eliud Kipchoge. “Our mentor Eliud Kipchoge was here, he had challenged us to make the team so that we can go to Tokyo together.”

Kwemoi said: “We have prepared really well and we hope to break the jinx in Tokyo. It was a really good race. I have to work on my last lap since I have the endurance. We had discussed with Kamworor and also had a chat with Kipchoge, who told us that we have to work as a team.”

On the first day of action, Obiri had secured her place in the 5000m at the Olympics but was beaten by Lilian Kasait Rengeruk. 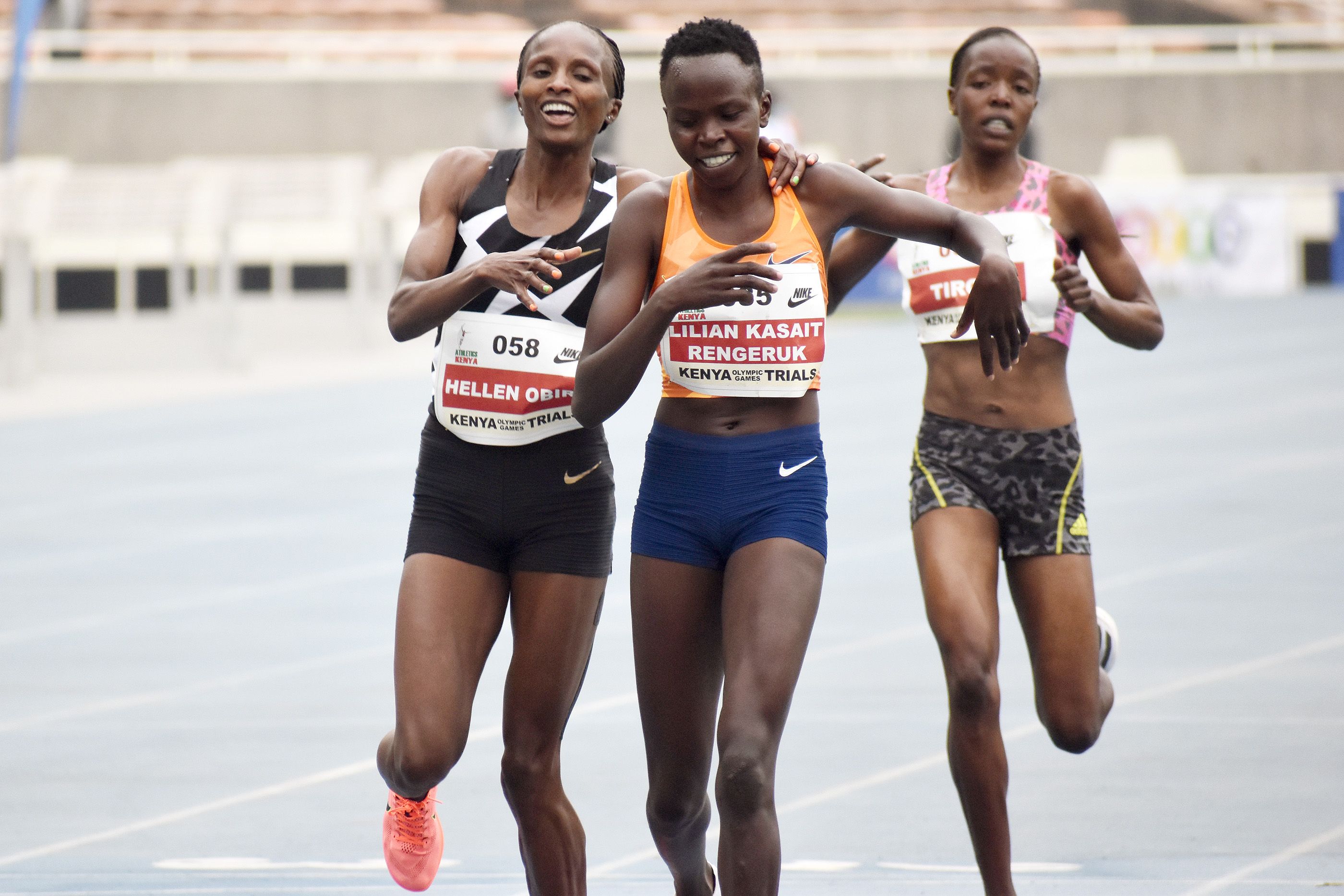 A group of eight had remained together until the pack approached the final lap, when five athletes – led by Rengeruk and Obiri – started to move away. Rengeruk picked up the pace with Obiri in pursuit, but the 2017 world cross country bronze medallist managed to hold off two-time world 5000m champion Obiri down the home straight. Obiri finished second in 14:52.51.

“I didn’t expect to win. I thank God for victory and good health,” Rengeruk told Athletics Kenya. “The race was tactical. I didn’t have many races (in the lead-up) but my preparation was uninterrupted. My wish is to work as a team in Tokyo to ensure we deliver podium finishes.”

Joining her in Japan will be Obiri, who made her half marathon debut with a 1:04:51 performance in Istanbul in April and in Nairobi explained how she may switch her focus to road races after this year.

“I’m satisfied with my second place finish, what matters most was to finish in the top two,” she said. “I will go back and work hard in training to ensure I do well in Tokyo.”

Cheruiyot and Kipruto miss out

The biggest shock of the competition, however, came in the men’s 1500m as world champion Timothy Cheruiyot finished outside the top three.

World and Olympic steeplechase champion Conseslus Kipruto, meanwhile, was unable to finish the steeplechase, stepping off the track after just two laps. Leonard Bett went on to win in 8:17.26 from Abraham Kibiwott (8:17.61) and Benjamin Kigen (8:21.32).

Faith Kipyegon remains on track for an Olympic title defence as she comfortably won the 1500m trials race in 4:02.10, with African champion Winny Chebet also claiming a team place thanks to her runner-up finish and Edinah Jebitok placing third. 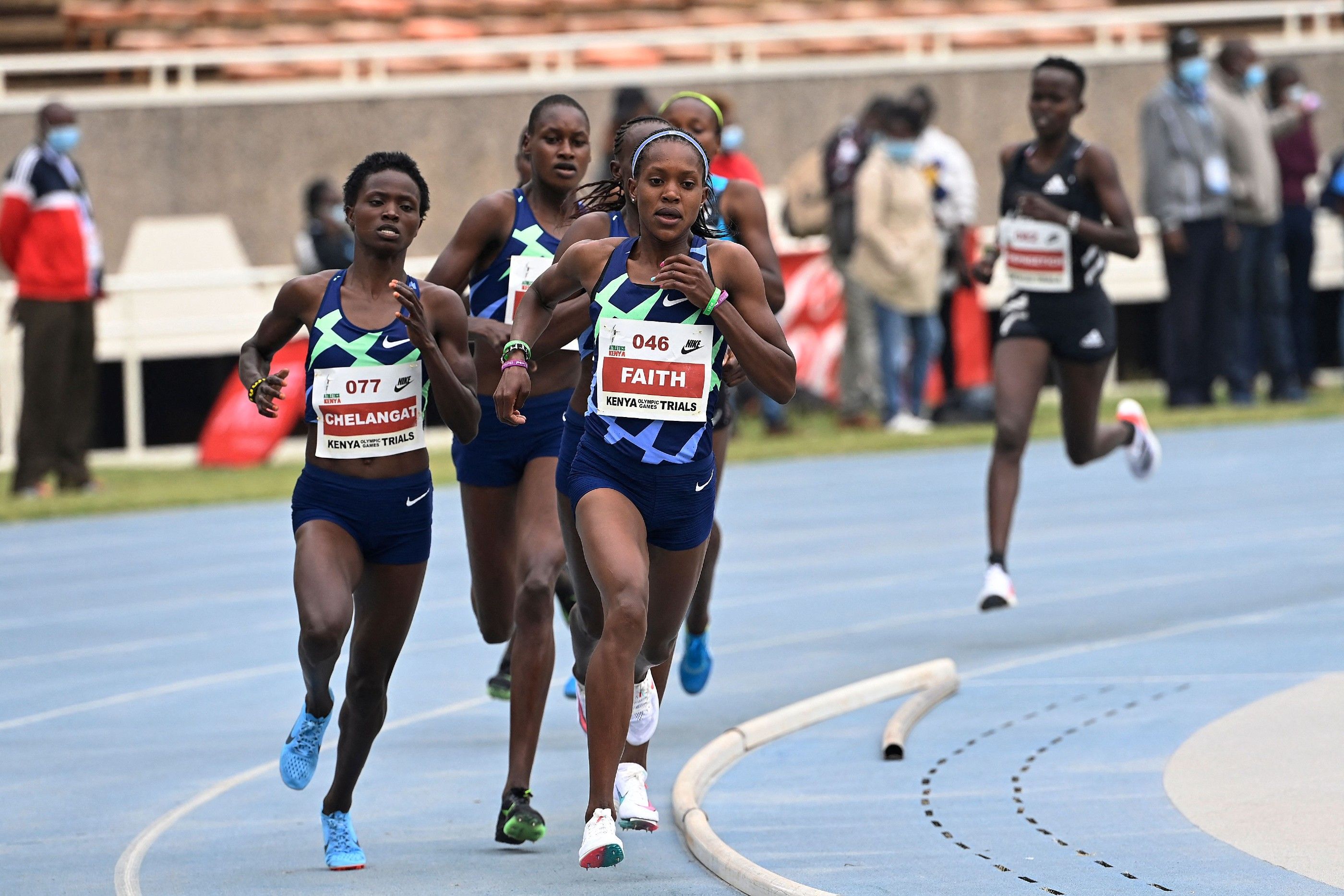 “My focus is to defend my Olympic title in Tokyo,” said Kipyegon, also the 2017 world gold medallist. “It was a really good race here, which I really wanted to win. I know I will meet many good athletes in Tokyo but I have prepared really well.”

The men’s 100m saw Ferdinand Omanyala improve on the Kenyan record with a time of 10.02 (1.5m/s), with Mark Otieno second in 10.05 to also achieve the Olympic qualifying time.

"It was a nice race,” Kiyeng told Athletics Kenya. “Our hope is to get to the Olympics in good health. We expect stiff competition. We still have a lot to work on as we head to Tokyo.”