Fancy Chemutai narrowly missed out on breaking the world record at the RAK Half Marathon on Friday (9) on a day when both course records fell.

The sea mist that blanketed the emirate’s capital provided near perfect conditions, while record-size mass fields and enormous depth to the elite groups meant a special day was more or less guaranteed.

The much-anticipated clash between world half marathon record-holder Joyciline Jepkosgei and Mary Keitany didn’t quite materialise. Jepkosgei, suffering the residual effects of a bout of flu over the past two weeks, dropped away shortly after half way and eventually fifth, albeit in a highly respectable 1:06:46.

But despite that, Keitany still wasn’t without serious opposition. Having been outsprinted by Peres Jepchirchir last year, this time it was 23-year-old Kenyan Fancy Chemutai who had the greater speed over the last 100 metres.

Perfect pacing by a trio of Kenyan men laid the foundation for an epic closing struggle. With five kilometres reached in 15:15, already the pattern for a world-record assault was set. The only surprise presence along with the ‘big three’ was that of Caroline Kipkirui, herself fresh from a PB in Houston on 14 January.

When 10 kilometres was reached in 30:34, all four still looked comfortable and ready to maintain the tempo. That Jepkosgei was the first to falter, quite suddenly, at about 13 kilometres, was quickly forgotten, as the tempo up front slackened only marginally. At 15 kilometres, reached in 46:07, the world record was very much on.

Kipkirui was the next to weaken, though not before she had nosed in front through 10 miles to set a world best of 49:29, and her final few kilometres were still sufficiently strong to remain comfortably in third.

The race came down to the contrasting figures of tiny Keitany and the long, rangy stride of the powerful Chemutai. At 20 kilometres, covered in 1:01:34, they were inseparable. Keitany momentarily looked to be the one applying the pressure, but Chemutai shrewdly delayed her surge until the final 100 metres of the race, crossing the finish line in 1:04:52 – tantalisingly just one second outside Jepkosgei’s world record set last year in Valencia.

The consolation for London Marathon-bound Keitany was yet another personal best (1:04:55). The pair now sit at second and third on the world all-time list behind Jepkosgei.

Kipkirui was further back in third in 1:05:07 – a time which one year ago would have equalled the world record, but now is ‘only’ good enough for equal fourth place on the world all-time list.

The men’s race, starting 15 minutes after the women, was of almost equally momentous proportions.

With 11 sub-60 minute performers on the line and a stated 10km target time of 27:50, the ambitions were not far off another world record assault. While that might remain the ambition for another day, when the large pack of 12 reached 10km in 27:48, another big performance was clearly in the offing.

It was long in to the third quarter of the race that the pack began to thin out, as prolific racer Alex Kibet pushed alongside the leaders. Just four men remained at the front as 15 kilometres was reached in 41:43, and at this sub-59-minute tempo it had become a war of attrition.

Slowly but surely, defending champion Bedan Karoki began to impose himself. At 19 kilometres he edged to the front and put in a testing surge; there was no response. He surged again and that gap grew further before eventually winning in 58:42.

His time took 10 seconds off the course record set nine years ago by Patrick Makau. It also moves the world half marathon silver medallist to fourth on the world all-time list, just 19 seconds shy of world record-holder Zersenay Tadese.

Like women's winner Chemutai, Karoki has been named on Kenya's team for next month's IAAF/Trinidad Alfonso World Half Marathon Championships Valencia 2018.

Ethiopia’s 21-year-old Jemal Yimer was the surprise of the men’s race. Having placed fourth at last year’s World Cross Country Championships and fifth over 10,000m at the IAAF World Championships London 2017, the 21-year-old underlined his excellent pedigree in what was his half marathon debut. While well beaten, Yimer’s eventual runner-up time of 59:00 is the fastest debut ever.

Kibet finished third in 59:06 in a race where the first seven men finished within 60 minutes.

BACK
Pages related to this articleAthletes
Fancy CHEMUTAI 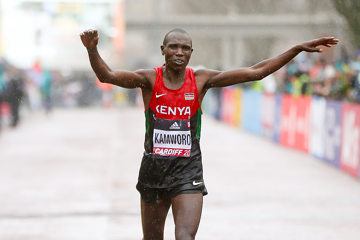 Kamworor and Jepkosgei lead Kenyan team for I... 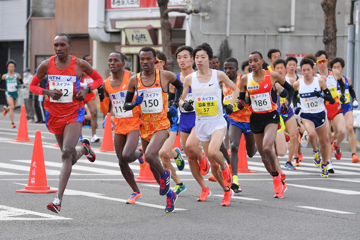