Kudo’s distance was a World best performance on the road, pending ratification.

In the men’s race, Japan’s Toshiro Naraki, Latvia’s Janis Actins and Poland’s Andrzej Radzikowski all had stints in the lead during the first half of the race, held on a flat 2.34km circuit in the centre of the Dutch town, but Olson went in front at the halfway point, after 12 hours and never relinquished the lead despite harsh night time weather with hail stones and thunder storms.

During the second half of the race, Naraki attempted to hold on to a podium spot and battled briefly with Russia’s veteran 24 hour runner Anatoly Kruglicov but both of these men faded out of World Championships medal contention and Olson’s compatriot john Dennis made his move in the third quarter of the race, with Germany’s Florian Reus moving up to third place in the early morning hours.

Dennis finished second with a distance of 262.734km and Reus was third with 259.939km, the latter defending his European title in addition to his World Championships bronze medal.

In the European Championships, Reus was followed home by Kruglicov and his Russian compatriot Timur Ponomarev with distances of 257.040km and 256.666km respectively.

In the World Championships team contest, the USA took the title followed by Japan and Germany. On the continental stage, Germany won the gold medals with Russia and Italy in the silver and bronze medal positions.

The women’s race took shape quickly with Japan’s Mikie Sakane taking the early lead and Great Britain’s Lizzy Hawker running steadily in second place until around nine hours into the race when Kudo, then in third place, made her move to pass Hawker.

She then went past her teammate Sakane at the 15-hour mark and held on to her lead until the noon stoppage time on 12 May, adding more than five kilometres to the previous World best which had been held by Hawker at 247.076km since 2011.

In the third quarter of the race, USA’s Sabrina Little made her move to acquire the silver medal spot with another American, Suzanna Bon, putting in a strong performance overnight and eventually finishing in third place, the pair covering 244.669km and 236.228km respectively.

In the World Championships team competition, the USA took the honours, with Japan second and France third. Among the European teams, France took home the gold medals, followed by Great Britain and Germany respectively.

IAU for the IAAF

BACK
Pages related to this articleAthletes
Mamiko Kudo 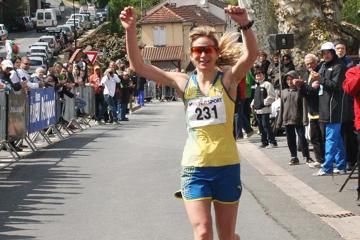