Jarrion Lawson and Donavan Brazier were the standout stars on the third day of the NCAA Championships in Eugene, Oregon on Friday (10), with both athletes carving their name into the history books alongside the greats.

Lawson, 22, became the first athlete since Jesse Owens in 1936 to win the 100m, 200m and long jump at the NCAA Championships, sealing a sprint double on Friday to add to his long jump title on Wednesday. His points total of 31.5 for the University of Arkansas was also the most any athlete has achieved since Jesse Owens' 40-point tally 80 years ago.

Despite a shaky start to his long jump competition – two fouls and a mediocre effort of 7.57m – Lawson shot to the lead with an 8.13m leap in the fourth round, which he bettered in the fifth round with 8.15m. That was more than enough to secure victory ahead of Roelf Pienaar (7.93m).

After a 48-hour hiatus, Lawson returned to the track for the 100m final on Friday evening and despite battling a stiff headwind of -2.3m/s, he powered to victory in 10.22, marginally ahead of Tennessee's Christian Coleman (10.23) and Senoj-Jay Givans of Texas (10.25), who had clocked 9.96 in the semifinals.

Just 45 minutes later, Lawson was back in his blocks for the 200m, and this time his victory was decisive, the 22-year-old celebrating his sixth NCAA title long before he crossed the finish line in 20.19 (-0.2m/s), once again ahead of Coleman, who was runner-up in 20.26.

"I came here expecting to win three events," Lawson told reporters after the race. "To be put in the same sentence as Jesse Owens, I'm just thankful."

Lawson will now turn his attention to the US Olympic Trials, which begin on July 1 at the same venue. "I treat all the events with the respect they deserve," he said. "I'm doing all three at the Olympic Trials. It was definitely preparation for that. It serves me great to do all of them at the same time."

While Lawson's feats were consistently excellent over the past three days, 19-year-old Donavan Brazier produced the standout individual performance of the week when running a North American U20 and NCAA record of 1:43.55 to win the 800m title on Friday.

The Texas A&M student was catapulted into the limelight earlier this year when running 1:45.93 indoors, but in what proved an exhibition of two-lap running well beyond his years, Brazier reached a new level again on Friday.

It was 50 years to the day since Kansas student Jim Ryun – who went on to have one of the great middle-distance careers – ran his record of 1:44.9, but that time was obliterated by Brazier.

Mississippi State's Brandon McBride led through 400m in a swift 50.35, with Brazier running in his slipstream, but with 150 metres to run Brazier powered on by the former champion and extended his lead all the way to the finish. His time of 1:43.55 was also the fastest in the world this year by an U20 athlete.

"I knew it would be a fast race, so I knew if I got in the right place, I'd run a fast time," said Brazier. "I didn't expect first, though."

In recent years, one name in particular has become synonymous with NCAA Championships of all types: Edward Cheserek.

The University of Oregon student already owned 13 NCAA titles – combining indoor, outdoor and cross country – heading into this year’s championships. In Eugene this week, he added two more titles to his tally by winning the 10,000m and 5000m.

On the opening day of the championships, the 22-year-old Kenyan clocked 29:09.57 to become the first man to win three consecutive NCAA titles at 10,000m. He crossed the line more than a second ahead of North Arizona’s Futsum Zienasellassie of Eritrea.

The 5000m was a bit closer, but he still had a comfortable margin of victory over Stanford's Sean McGorty, winning in 13:25.59.

Texas A&M decathlete Lindon Victor was another athlete who lived up to expectations.

The Grenadian, who is also the brother of Commonwealth decathlon champion and 2012 NCAA champion Kurt Felix, recently came close to the collegiate record with his 8446 victory at the SEC Championships.

In Eugene he was on course to better that mark after three events, but a slightly below-par high jump of 1.95m dented his chances. Nevertheless, he was close to his lifetime bests in most of the remaining events and set PBs in the 110m hurdles and 1500m on day two, eventually winning with 8379.

NCAA indoor champion Zach Ziemek set a PB of 8300 to finish second, while defending champion Maicel Uibo was third with 8294, making it the highest-quality decathlon podium in NCAA Championships history.

The world junior silver medallist did it in style, too. After an opening foul, she improved with each round and produced a winning heave of 19.33m with her penultimate throw.

The 20-year-old, who finished an uncharacteristic 12th at this year’s NCAA Indoor Championships, added 34 centimetres to the collegiate record which had stood since 1983. She also moved to seventh on the US all-time list and fourth on this year’s world list.

Earlier in the afternoon, another collegiate record fell in a women’s throwing event.

Maggie Malone of Texas A&M put together the series of her life in the javelin to continue her unbeaten streak this year. She opened with a lifetime best of 62.19m, followed it with three more throws beyond 60 metres, and then matched her PB in the fifth round.

Her winning mark broke the collegiate record by 37 centimetres and moves Malone to fourth on the US all-time list.

DeAnna Price successfully defended her title in the hammer and added four centimetres to the championship record she set last year. The Southern Illinois student dominated the competition and threw her winning mark, 71.53m, in the third round.

Elsewhere, Virginia’s Filip Mihaljevic won the shot put. The world indoor bronze medallist from Croatia took the lead in the third round and then produced an outdoor PB of 20.71m in round four.

The men's triple jump title was won by Latario Collie of Texas A&M, his only measured mark of 16.97m coming in the first round. Another to seal gold with his opening effort was Nicholas Percy of Nebraska, who won the men's discus title with a best of 61.27m.

Success a family business for Cunningham

Randall Cunningham of the University of Southern California proved that sporting success runs in the family when winning the men's high jump with a clearance of 2.25m. The 20-year-old is the older brother of world indoor high jump champion Vashti, and he had a perfect series throughout Friday's competition, clearing his winning height, like all those that came before, on the first attempt.

Back on the track, the men's 400m title was won in commanding fashion by Florida's Arman Hall in 44.82, while the 400m hurdles crown went to his teammate Eric Futch in 48.91.

Devon Allen of the University of Oregon delighted the home crowd by taking victory in the men's 110m hurdles, his winning time of 13.50 leaving him well clear of runner-up Nick Anderson of Kentucky (13.67).

In the men's 1500m, Akron's Clayton Murphy unleashed a devastating turn of speed on the last lap to seal victory in 3:36.38 ahead of Washington's Izaic Yorks, who was runner-up in 3:38.06.

Cathal Dennehy and Jon Mulkeen for the IAAF 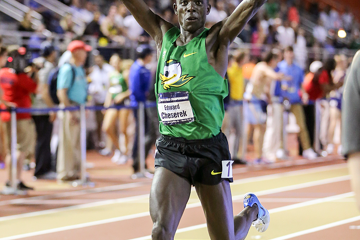