The appearance of Olympic hammer champion Dilshod Nazarov was one of the highlights of the Asian Championships, and the towering thrower didn't disappoint the crowd gathered at Kalinga Stadium on the third day of the championships in Bhubaneswar, India, on Saturday (8).

Nazarov didn't find his rhythm in the initial rounds. However, as the competition progressed he built momentum and stamped his class in the final round with a 76.69m effort. It was the second best winning throw this season for the 32-year-old from Tajikistan who won the continental title for the fourth time. His first came in Guangzhou in 2009.

Nazarov began his continental success as the U20 champion in Singapore 18 years ago, which he followed with a pair of silvers and a bronze at the senior level before his first triumph in 2009. Nazarov was happy to retain the title, although he fell short on his ambitions to better Koji Murofushi’s meet mark of 80.45m and countryman Andrey Abdulayev’s Indian all-comers record of 79.10m.

“I am focusing on the upcoming Worlds at London, so I played it safe here,” said Nazarov, who heads the Tajikistan Athletics Federation.

The silver in this event went to China’s Wang Shizhu was second with 73.81m, just four centimetres better than Korean Lee Ywun-Chul.

In a similar fashion Kuwait’s Abdulaziz Al-Mandeel, who had two successive runner-up finishes in the 110m hurdles in 2013 and 2015, moved up a notch in Bhubaneswar.

Having entered with identical season bests of 13.39 alongside Korean Kim Byung-Jun, who shared the podium with him at Wuhan in 2013, Al-Mandeel felt more assured of victory after the morning’s heats where the Korean failed to advance following a poor finish. But teammate Yaqoub Al-Yoha seemed unpredictable after a win in the Asian Grand Prix at Jinhua earlier this year. When the race was on Indian record-holder Siddhanth Thingalaya took and early lead but faded away by the midway point leaving the two Kuwaiti to battle it out. Al-Mandeel took the win in 13.50 followed by Al-Yoha who clocked 13.59.

When India previously hosted these championships at Pune four years ago, Eric Cray could not finish his 400m hurdles race. However on the same Indian soil the 28-year-old ended as Asian champion. The Filipino-American, born in Sacramento, made an impression when he won the 100m and 400m hurdles titles at the South East Asian Games in 2015. He didn't reach the 100m final here, but took his specialty in 49.57, beating Chinese Taipei’s Chen Chieh, who clocked 49.75. India's MP Jabir was third in 50.22.

India’s Sudha Singh was the inaugural Asian Games champion when the women’s 3000m steeplechase was introduced in Guangzhou seven years ago. Between 2009 and 2013 she won three silver medals in the Asian championships. However, illness dashed her entry in the last edition at Wuhan where another Indian Lalita Babar emerged as the champion. Babar improved rapidly and made notable appearances in the world and Olympic finals thereafter.

The rivalry between the two Indians has become a familiar one, with Babar improving the national mark several times. Singh reclaimed in briefly with a 9:26.55 performance in the Shanghai leg of the Diamond League last year. But Babar Indian once again bettered it. However the absence of Babar and Bahrain’s world record-holder Ruth Jebet made Singh's task significantly easier in Bhubaneswar. She ran well calculated race, taking the lead from the start and finished in a season best 9:59.47.

Iran’s Hossein Keyhani pulled a big surprise in the men’s race. A fourth place finisher at Wuhan, Keyhani snatched the lead just before the penultimate water jump and went on to win in 8:43.82.

Worlds silver medalist Zhang Guowei was not at his best and settled with a silver clearing 2.28m. In the high jump, former world youth champion Woo Sang-Hyeok topped 2.30m to take the title ahead of China's Zhang Guowei who topped 2.28m. Syria’s Majed El Dein Ghazal, who entered the fray with a season best 2.32m, finished third at 2.24m.

Kazakh women took 1-2 in the triple jump with Mariya Ovchinnikova, the inaugural Asian youth champion in 2015, winning with 13.72m ahead of Irina Ektova, who reached 13.62m.

Earlier in the day, world U20 record holder in the javelin throw Neeraj Chopra was presented with a World Record Trophy in a special ceremony on the sidelines of the Championships. Athletics Federation of India (AFI) President Adille J. Sumariwalla presented th trophy.

The 19-year-old won gold at the IAAF World U20 Championships Bydgoszcz 2016 with an 86.48m throw to establish the new world U20 standard.

Ram. Murali Krishnan for the IAAF 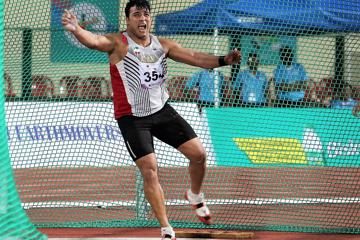 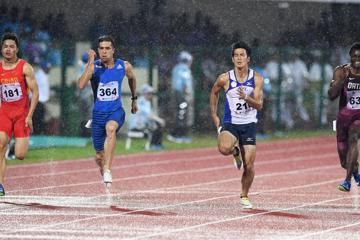