Despite being a country whose success traditionally comes in the field events, it was the track events that provided the highlights at the German Indoor Championships in Dortmund on Saturday and Sunday (17-18).

European indoor 1500m silver medallist Konstanze Klosterhalfen ensured her 21st birthday will be one to remember as she front-ran her way to a German indoor record of 8:36.01, taking more than five seconds off the previous mark of 8:41.79 set by Kathrin Ullrich from the former East Germany in 1988. 2015 world steeplechase bronze medallist Gesa Felicitas Krause was second in a season’s best of 8:54.08.

“It’s the best birthday I’ve ever had,” said Klosterhalfen. “It’s a great feeling to spend it doing what I like to do and with the people that matter to me. At the beginning I just ran the lap times that my coach Sebastian [White] told me. I tried to stay relaxed and in the end I didn’t think about the lap times anymore. I thought: just run.”

Tatjana Pinto regained her 60m title and shaved 0.01 off her lifetime best to win in 7.06. The last time a German woman ran faster was back in 1988.

Pinto returned 24 hours later to win her first national title over 200m, winning in an indoor PB of 23.19.

The field event highlights came from Mateusz Przybylko, who won the high jump with 2.30m, and two-time world champion David Storl, who set a season’s best of 21.19m in the shot.

Three days after breaking the Polish indoor record with 22.00m at the IAAF World Indoor Tour meeting in Torun, European indoor champion Konrad Bukowiecki had to settle for the silver medal at the Polish Indoor Championships at the same venue.

European silver medallist Michal Haratyk produced a strong series in which any one of his five valid marks would have been enough to win. His top mark of the day, 21.47m, added two centimetres to his indoor PB. Bukowiecki, meanwhile, was a distant second with 20.60m.

The men’s pole vault was the other hotly contested event of the weekend and European indoor champion Piotr Lisek once again prevailed over 2011 world champion Pawel Wojciechowski. Lisek, who needed three tries to get over 5.72m, trailed Wojciechowski, who cleared that height on his first attempt. But Lisek went on to clear 5.83m while Wojciechowski was unable to go any higher.

Elsewhere, Paulina Guba set her second PB in as many competitions this year to win the shot with 18.77m, while 18-year-old Adrianna Sulek broke the national U20 indoor pentathlon record with 4385.

World record-holder Renaud Lavillenie won the pole vault title at the French Indoor Championships in Lievin and was joined on the podium by his younger brother Valentin.

After securing the win at 5.78m, Renaud went on to clear 5.83m before having three failures at 5.93m. Valentin cleared 5.72m, the same height as Kevin Menaldo, but earned second place on countback.

Aurel Manga caused an upset in the 60m hurdles to reverse the result from last year in a near identical finish. While two-time world indoor silver medallist Pascal Martinot-Lagarde won by 0.01 last year, 7.52 to 7.53, this time Manga got the victory by the same margin. Manga replicated his time from 12 months ago, while Martinot-Lagarde – competing for the first time this year after injury delayed the start to his season – finished second in 7.54.

European 100m bronze medallist Mujinga Kambundji took a sizeable chunk off her own national indoor record to win the 60m at the Swiss Indoor Championships in Magglingen.

Having improved her season’s best in almost every competition so far this year, Kambundji continued her progress by speeding to a world-leading 7.03 in the short sprint, improving her previous best by 0.08.

Another women’s national sprint record fell one day later, this time courtesy of Lea Sprunger. The heptathlete-turned-hurdler-turned sprinter, who set a Swiss indoor 400m record of 51.28 just a few days ago in Torun, was this time competing over one lap of the track and stopped the clock at 22.88. It broke the previous national indoor record set 20 years ago by Mireille Donders.

Elsewhere around Europe, Dafne Schippers sped to a 7.09 clocking to win the 60m at the Dutch Indoor Championships in Apeldoorn with Jamile Samuel finishing second in 7.17.

Fabrizio Donato, now 41 years old, opened his 2018 campaign with a 16.94m leap to win the triple jump at the Italian Indoor Championships in Ancona.

World leader Tomas Stanek, having been beaten in Torun earlier this week, returned to winning ways to take the shot put title with 21.59m at the Czech Indoor Championships in Prague.

Philip, Muir and Pozzi among the winners at B... 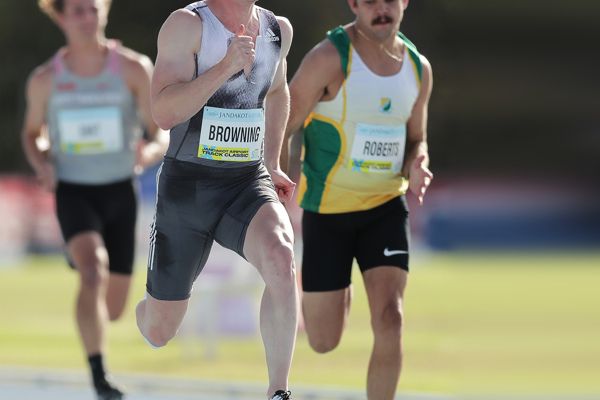