Trinidad and Tobago’s Lalonde Gordon and Mikel Thomas, as well as American hurdler Lolo Jones, provided the highlights of the second day of the NACAC Senior Championships in San Jose, Costa Rica, but the USA continued its dominance by taking 10 of the 13 finals contested on Saturday (8).

One day after setting a championship record of 44.64, his fastest time since claiming the London 2012 Olympic Games 400m bronze medal, the 26-year-old Gordon confirmed his fine form by taking the title over one lap of the track in 44.89, coming home ahead of local favourite, 2012 world indoor champion Nery Brenes, who was second in 45.22.

Thomas added a second gold for Trinidad and Tobago by taking the 110m hurdles in 13.23, a new championship record, just a few days after setting a national record of 13.17 for silver at the Pan American Games in Canada.

Two-time former world indoor champion Lolo Jones, from the USA, took the 100m hurdles crown with 12.63, but the time will not go to the record books as a result of an extravagant 4.1 mps tailwind. Her compatriot and Pan American Games champion Tenaya Jones finished a close second with 12.68.

The 100m did not produce the fast times expected after the heats’ results on Friday but did provide a few upsets.

After setting championship records in their heats, Jamaica’s Samantha Henry-Robinson (11.01 on Friday) and Sheldon Mitchell (10.07) were left out of the medals.

Barbara Pierre and Charonda Williams made it a one-two for the USA. Pierre stopped the clock first with 11.12 while Henry-Robinson finished a distant fifth with 11.45.

USA’s 2011 world championships bronze medallist Jill Camarena-Williams improved the meeting mark to 18.62m in the shot put, winning by more than a metre, while Amber Campbell and Cameron Burrell were also victorious in the women’s hammer throw and the men’s long jump, with winning distances of 72.41m and 8.06m respectively.

Wheating add to his gold reserves

In a modest and rather bizarre men’s pole vault final, El Salvador’s 17-year-old Natan Rivera was the only one of the six competitors to clear a height and emerged as the unheralded winner.

Rivera, who his country sadly didn’t even send to last month’s IAAF World Youth Championships, was the lowest ranked vaulter in the field and arrived in San Jose with a best set earlier this season of 4.67m. The teenager presumably was expecting just to witness a masterclass from the likes of USA’s 2007 world champion Brad Walker, a man who holds the area record with 6.04m, and Cuba’s Lazaro Borges, the 2011 world championships silver medallist, and had no realistic medal ambitions.

Rivera entered at the competition’s opening height of 4.55m and went over first time before clearing a personal best of 4.70m on his second attempt.

His competition came to an end after three failures at 4.85m but Walker, Borges and USA’s Nick Mossberg were still to start vaulting.

However, none of the trio mastered the swirling, breezy conditions and, with the bar well over five metres, all three failed their opening heights to leave Rivera as the totally unexpected gold medallist – and the only man standing on the podium when the medals were distributed.

The 2nd NACAC Senior Championships will conclude on Sunday at San Jose’s National Stadium with 18 finals, including all relays.

BACK
Pages related to this articleAthletes
Lolo JONES 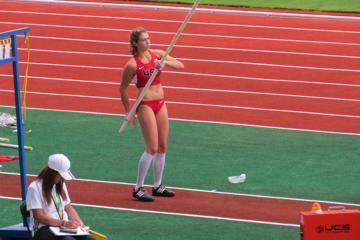