Kipruto and Burka the commanding victors at Elgoibar

Weather conditions made the athletes’ task really tough as heavy rain fell during the second half of the men’s race on ground that had absorbed relentless rain from the previous night.

The men’s 10.8km contest had been billed as a thrilling encounter among four top Kenyans in the guise of the three-time winner Leonard Komon, last year’s 10,000m world leader (26:51.16) Emmanuel Bett, 2011 World cross-country bronze medallist Vincent Chepkok and Conseslus Kipruto, who was an impressive winner at the IAAF World Junior Championships in Barcelona with a championship record of 8:06.10 in the 3000m Steeplechase.

With fears of the course being muddy, the race didn’t begin particularly fast with Italy’s Andrea Sanguinetti and Spain’s 2008 World indoor 1500m bronze medallist Juan Carlos Higuero making most of the early pace.

Shortly afterwards, Kipruto took command of the pace for the first time but he was soon relegated to second as the 2008 World Cross silver medallist Komon regained the leadership. As a result of his relentless pace, Guerra and Higuero lost any chance of victory by halfway while Lamdassem seemed in trouble at the back of the pack.

The penultimate 2100m lap didn’t produce any major changes. Kipruto and Komon took turns at the front with Bett and Chepkok positioned just behind them. It was then when the ferocious rain began to fall.

By the bell Komon, Bett and Kipruto ran in single file and the trio built a 30-metre margin on Chepkok and Lamdassem. Kipruto, still just 18 years old, regained the lead with 1200m remaining and opened up a sizeable gap on Bett within the space of 200m while Komon was alone in third.

As a consequence of the heavy rain, conditions became gruelling and a spot of drama took place when the eventual winner Kipruto fell into the mud just 400m from the finish line. But his leading margin proved big enough to regain his balance, stand up and keep on running to the tape.

Bett finished two seconds adrift in second place, while Lamdassem came from behind to overtake a fading Chepkok and pip Komon in the closing 50m to take third place on the podium.

“I wasn’t sure of winning at any time because I had picked up a strong cold earlier this week and I didn’t feel 100%,” said Kipruto. “Fortunately my fitness proved good enough to win in such a star-studded line-up. I’m still a junior so I’m aiming to win the junior title at the World Cross in Bydgoszcz next March.”

Asked about his outdoor plans, Kipruto was adamant: “I’ll do my very best to make the Kenyan team for Moscow in the 3000m Steeplechase.” Kipruto is also the current World youth 2000m Steeplechase champion and boasts an impressive 8:03.49 PB for the 3000m Steeplechase, set when winning the IAAF Diamond League meeting in Monaco five days after bagging the World junior title in Barcelona.

Burka is an overwhelming victor

After her brilliant win at the New Year’s Eve 10km race in Madrid with a superb 30:59 clocking, Ethiopia’s Gelete Burka began the 6.6km event as the woman to beat. Although her compatriot World junior 5000m champion Buze Diriba and Kenya’s Mercy Cherono were tipped as her toughest rivals, the early stages of the event were dominated by European athletes like European cross-country bronze medallist Adrienne Herzog and the Spanish pair of Diana Martín and Alessandra Aguilar.

With the clock reading 10:00, the former World junior 3000m champion Cherono moved to the front to set a brisker pace but fellow Kenyan Irene Cheptai and Ethiopian duo Burka and Diriba remained comfortably on her shoulder while Aguilar was the first to drop off the leading pack.

Some 18 minutes into the race Cherono moved into top gear to leave behind all the others, except for the in-form Burka who covered Cherono’s change of speed before breaking away from her with awesome ease some 800m before the tape.

Burka ran the last few hundred metres in style to romp home unopposed in 22:53 with a six-second advantage over Cherono while Cheptai got the better of Diriba to complete a classy podium. The stiff battle to be first European home went to Martín in a close sprint finish from Herzog.

The 26-year-old Burka confirmed that she is now targeting the IAAF World Cross Country Championships in Bydgoszcz next March.

It was also a day of celebration because exactly 50 years ago the 1968 Olympic Marathon champion Mamo Wolde took the first of his four victories in Elgoibar. The trophy for the junior men’s race is named in Wolde’s honour, and on this occasion it was won by Italy’s Lorenzo Dini, while Spain’s Claudia Estévez won the junior women’s race. This year also marked the 10th anniversary of Kenenisa Bekele’s victory in Elgoibar.

BACK
Pages related to this articleAthletes
Gelete BURKA 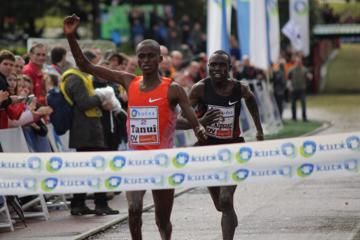 Tanui and Wude Yimer take the spoils at Elgoi...