Bekele back to his brilliant best in Berlin

Ethiopia's Kenenisa Bekele emerged victorious in a battle for the ages with Kenya's Wilson Kipsang during the BMW Berlin Marathon on Sunday (25), an IAAF Gold Label Road Race. His winning time of 2:03:03 was an Ethiopian record and the second-fastest time in history on a record-eligible course.

Bekele took command of the race entering the final kilometre, surging away from former world record-holder Kipsang to take his first victory in Berlin, smashing Haile Gebrselassie's Ethiopian record of 2:03:59 in the process.

In mild, calm conditions in the German capital, the pace was blistering from the outset. A 5km split of 14:20 was the kind of tempo to take them across the finishing line close to the magical barrier of the sub-two-hour marathon. Unsuprisingly the pace slowed, but at halfway with the pacemakers having made an early exit several kilometres previously, the lead group of eight was timed at 1:01:11, which still put them inside the world record schedule of Dennis Kimetto, who had run 2:02:57 in Berlin in 2014.

The man who broke up the five-strong leading group was Kipsang, who surged at the front shortly before 30km. The Kenyan’s attack ripped apart the group which contained Bekele and Kipsang’s compatriots Alfers Lagat and Evans Chebet along with Bekele’s fellow Ethiopian Sisay Lemma.

At the 30km mark, reached in 1:26:26, Kipsang was joined by Lagat. However, Bekele always remained in touch, and despite dropping back on several occasions, he trailed Kipsang by just five seconds as they reached 35km, more than enough contact for a man with a track pedigree like Bekele's.

The 5000m and 10,000m world record-holder steadily reeled in his target over the kilometres that followed, clocking off consistent splits and running alongside Kipsang at the 40km mark before unleashing his decisive move. Bekele changed gears impressively with just over a kilometre to run, a move Kipsang simply couldn't match.

With nothing but the clock left to race, the 34-year-old Ethiopian powered up the home straight in the shadow of the Brandenburg Gate, but fell just short in his bid to break the world record of 2:02:57.

"I wanted to run my personal best here," said Bekele. "The time was fantastic. I’m so happy to have broken the Ethiopian record of Haile Gebrselassie, but I’m a little disappointed as well, since I didn’t break the world record. But I hope I can come back here again and get a second chance. Towards the end of the race I had a few problems with my hamstrings but otherwise it was okay."

Kipsang came home second in 2:03:13, and had every reason to beam with pride after carving 10 seconds off his personal best.

"It was a very nice race and my feeling was good," he said. "I was hoping we could run a world record but to run a personal best is good. We ran a good race together. Even though [Bekele] just missed it, he will run it another day. I was going all out to break the world record but couldn’t quite do it. There’s always another time. It was a great race, even though I finished second."

The Kipsang family had more than one runner on the start list over the weekend: Wilson brought his oldest son Bethuel to watch him in action for the first time at a major race. The 12-year-old ran the Mini-Marathon on Saturday for schoolchildren, held over a tenth of the marathon distance.

Kebede the marathon queen once again

Kebede, Dibaba and fellow Ethiopian Ruti Aga ran together through 10km in 33:12 and 15km in 49:40, but Kebede began to press on alone before halfway, which she reached in 1:09:27. From there, she extended her advantage all the way to the finish, coming home just 15 seconds shy of her personal best of 2:20:30.

"I’m very happy to have won here for the third time," said Kebede. "It was a big ambition to break 2:20 and it still is. I hope to have another chance to achieve this in Berlin."

41,283 runners from 122 countries entered the 43rd edition of the race, which is part of the Abbott World Marathon Majors.

Cathal Dennehy and organisers for the IAAF 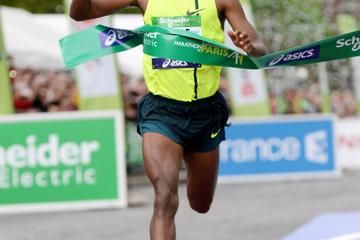 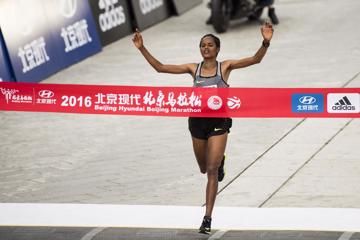 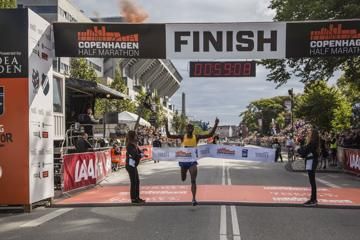 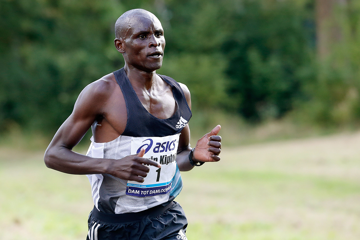