Johnson-Thompson jumps to attention with big marks in Sheffield

The European under 23 heptathlon champion and 2012 IAAF World Junior Championships long jump winner cleared 1.96m on her final attempt in the high jump contest having secured the title with 1.90m, one centimetre above her previous best.

The 21-year-old went on to clear 1.92m on her second attempt before the bar was raised one centimetre above the previous record, which had been held by three jumpers – one indoors and three outdoors.

Twenty-four hours later, she improved her indoor long jump best three times to finish with a winning mark of 6.75m.

“It’s a proud moment,” said the Liverpool athlete after the high jump in which she also eclipsed Jessica Ennis-Hill’s stadium record of 1.92m.

“I knew I was in good form because I had a really good high jump session in Loughborough last week,” she said. “I’ve been working on things mentally because last year and the year before I knew I had a good jump in me.”

Johnson-Thompson came to Sheffield having already set three personal bests this year, in the shot, 60m and 60m hurdles.

She was scheduled to compete in the hurdles here too but withdrew in order to concentrate on the long jump.

It proved be a wise move as she opened with 6.45m in the second round, improved to 6.55m in round three and went another 20cm further in round five to now sit joint third on the 2014 world list.

“It was better than I could have imagined,”' she added after her second victory. “I didn't sleep last night, so I'm actually really tired now. My body's clearly in good shape, but I'm really tired so I didn't expect to come out and do that.

“I got to sleep about 1am and woke up about half four and couldn't get back to sleep. I was watching the British Athletics video they posted of me doing it (the high jump) in slo-mo and I couldn't sleep.

“I couldn't be more happy with how the weekend has gone. I just want to be able to do all this in the heptathlon because that's my main event and that's all I care about. I want to make major points in the heptathlon and see my overall score then, but it's looking good.”

Johnson-Thompson will now focus on winning a place in the Sopot pentathlon contest.

She needs to get into the top three in the world this year when she competes in Apeldoorn next weekend.

“The World Indoors is invitation-only and they invite eight people: the top three heptathletes from last year, the top three pentathletes from this year (as of 17 February), a wild card and the Combined Events Challenge winner. In order for me to go I need to do a pentathlon which I’m doing next weekend in Holland, and hopefully I’ll get an invite.”

Others in good form ahead of Sopot included Holly Bleasdale who briefly leapt to the top of the 2014 world pole vault rankings with a first time clearance at 4.73m.

The 2013 European indoor champion bounced back from an injury-hit 2013 to win her fourth consecutive UK indoor title with one attempt at 4.46m.

She then went to clear 4.60m and 4.73m with minimal effort, but eventually came unstuck at 4.81m where the 22-year-old had two good attempts, bouncing the bar on the upright on her first try.

Asha Philip came desperately close to another national record as she retained her women’s 60m title.

The former World Youth 100m champion dominated the final in 7.09, a stadium record and just 0.01 outside Jeanette Kwakye’s British best from 2008, the year the latter sprinter won a World Indoor silver.

Dina Asher-Smith was some way back in second in 7.25 after she’d run a best of 7.22 in the semi-final, but the 18-year-old moved up a slot on Sunday when she equalled the stadium record of 23.20 to win the women’s 200m, the distance at which she took gold outdoors at the European Athletics Junior Championships last summer.

Chris Clarke defended his title in the men’s 200m and claimed a personal best in the process, a clear winner in 20.68 to match the world lead shared by Wallace Spearmon and Jermaine Brown.

James Dasaolu was another successful defender, winning the men’s 60m for the second year in a row. Despite a poor start, the European indoor silver medallist equalled his season’s best of 6.50.

Dasaolu, this year’s world number two, had called 2010 World Indoor Championships 60m gold medallist Dwain Chambers a spent force in the championships build-up, but the 35-year-old looked far from that as he edged ahead of Richard Kilty for second, both in 6.53.

Things were even closer in the men’s 60m hurdles where Andy Pozzi and William Sharman shared the title after they dead-heated the final in 7.64. It was a personal best for Sharman and a satisfying 0.01 inside the Sopot qualifying time for both.

Jemma Simpson made a successful move up from 800m to take the women’s 1500m title in 4:14.68. Timing her attack well, she came through on the home straight ahead of Alison Leonard and Melissa Courtney.

Middle distance events provided some of the highlights on Sunday too, not least the women’s 800m which pitched Scotland’s world leader Laura Muir against the experienced 2011 European indoor champion Jenny Meadows, who is on the comeback trail after a frustrating two years of injuries.

After a tactical first two laps, Meadows made her move 400m out but Muir was in a different class and she streak past down the back straight to win in 2:06.04. The tiring Meadows faded to fourth, edged out by Shelayna Oskan-Clarke and Katie Kirk.

Andrew Osagie looked to be an equally comfortable winner of the men’s 800m when he crossed the line first in 1:50.85 only to be disqualified for stepping off the track when he past the leader on the inside down the back straight.

After taking them through a slow first half of 57.32, the 2012 World Indoor Championships bronze medallist streaked away from the field over the last 100m but Muqtar Mohammed was given the title after crossing the line second in 1:51.87.

Lee Emanuel turned on the style over the final lap to win the men’s 1500m after a modest first 800m.

The Sheffield athlete showed why he is the fastest miler in the world this year as he out-sprinted Chris O’Hare and Charlie Grice to win in 3:48.15. O’Hare dipped ahead of Grice for second as the top four were all under 3:49.

BACK
Pages related to this articleAthletes
Asha PHILIP 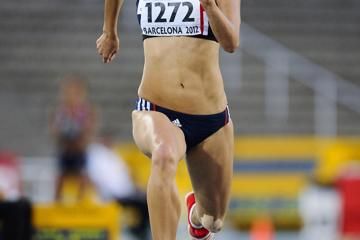 It's a mad, mad world for Britain's multi-tal... 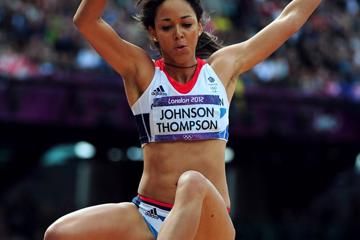