Isinbayeva, Kolchanova and Kotulskaya are the second-day stars at the Russian Championships

Pole Vault star Yelena Isinbayeva cleared 4.75m to provide the highlight of the second day of the Russian Championships on Tuesday (23), the final test event before the IAAF World Championships next month.

Isinbayeva, competing in her first Russian Championships for a decade, cleared her winning height on her third attempt before unsuccessfully trying 4.85m.

“I have earlier in the season a best result of 4.78m, so I immediately put the bar up to 4.85m. Going up to 4.80m was too small a step but 4.85m, that was my minimum goal. Unfortunately, I had one of those days when women do not feel very well,” revealed Isinbayeva.

“Yesterday everything was fine; there was just a little ‘ringing’ in my legs. Today, I was just knocked out. However, it was nice to compete at the Russian Championships and to win the title. It’s possibly the last national title of my career.

“It was a pleasure to compete with our young girls. At first, they did not look at me; I’m still a rival. But after the event, they came over and asked questions. I sincerely wish them success - they are our future, the future Olympic champions and World champions.

"Now I’m looking forward to the World Championships, I’m going in a good mood and with a desire to fight. My friends and family will be there to support me, they have already bought tickets."

She will be joined in the Russian team by Anastasiya Savchenko, who cleared 4.60m, and Angelina Krasnova, who went over 4.50m

In the women’s Long Jump, with Yelena Sokolova and Darya Klishina already pre-selected, there were only two places available. Lyudmila Kolchanova won with 6.89m ahead of 2011 World Championships silver medallist Olga Kucherenko and Veronika Mosina, who reached 6.75m and 6.70m respectively.

In similar fashion, with London 2012 Olympic Games and defending World champion Mariya Savinova and London 2012 bronze medallist Yeketerina Poistogova pre-selected, only two places were up for grabs in the 800m.

Yelena Kotulskaya came out on top in 1:59.56, after getting to the front with 300m to go and letting all the other women chase her, with Yekaterina Sharmina second in 2:00.33 and Marina Pospelova third with 2:00.61.

“This was especially pleasing as I had suffered from some food poisoning before the World University Games in Kazan recently and didn’t do so well there (she finished fifth). Usually I start fast and watch the others overtake me on the secon lap but this time I decided to hold back until after the bell,” said Kotulskaya

Olga Kharitonova won the women’s 100m in 11.51 and Yekaterina Strokova took the Discus with 61.34m

In the men’s finals, Maksim Sidorov won the Shot Put with 20.45m from Aleksandr Lesnoy, who reached 20.23m.

Former European junior champion Ilgizar Safiulin won the 3000m Steeplechase in 8:28.87 while Aleksandr Brednev was the fastest in the 100m with a modest 10.38.

In the women’s 400m semifinals Tatyana Firova was the fastest in a swift 50.87, while Sergey Shubenkov clocked a fast 110m Hurdles heat time of 13.27 (-0.2). In the women’s 100m Hurdles heats Tatyana Dektyareva was the fastest with 12.97 and two-time World Championships bronze medallist Anna Pyatykh topped women’s Triple Jump qualification with 14.09m, with legendary Tatyana Lebedeva also qualifying with 13.80m. 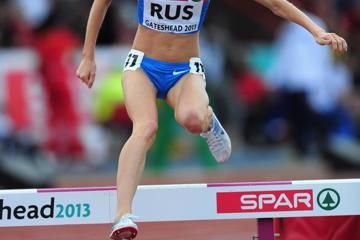