The early morning heavy downpour abated just in time for the start of the race, but runners still had to contend with strong winds and the course’s notorious hills.

Vernon, a double European silver medallist on the track in 2014, broke away from club-mate and defending champion Chris Thompson at the eight-mile mark and went on to win in 1:03:32. Thompson finished 20 seconds behind in 1:03:54.

Belgian Olympian Koen Naert placed third in 64:24, having been dropped by the British duo 25 minutes into the race.

“I’m absolutely delighted,” said Vernon, who will compete over 10 miles at the Great South Run next week.

“I tried to run strong and run hard. I made a move before eight miles. It made it a long run home, but I run 18 miles in training so I was prepared for it.

“Chris was running behind me for a bit,” added Vernon. “He wasn't dropping off but I felt strong and held on. Once it came to the hill he thought he wasn't going to catch me so the gap extended. I wasn't concentrating on what was going behind but I noticed the gap was bigger and I knew I was alright from there.

“It's a very interesting course to run, full of twists and turns, uphills, downhills. You don't notice how far you're running on those types of courses. It is a distance that I don't run very often but it's great to win. I haven't won anything for a while.

In the women’s race, Cherono broke away from her opponents early in the contest. The Dutchwoman passed 10km in 34:40 before easing home in 1:13:42 to win by more than a minute.

Cherono’s winning time was some way shy of her 1:10:10 personal best, but the 28-year-old was more than satisfied with her victory.

“It's always a nice feeling, winning,” she said. “It felt really good from the start. I wasn't able to push it a lot but I met some guys on the course who pushed me to it, so I'm really happy to get the win.”

BACK
Pages related to this articleAthletes
Andy Vernon 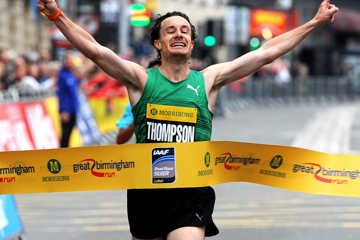 Victorious return for Thompson in Birmingham... 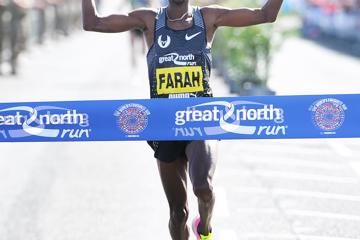 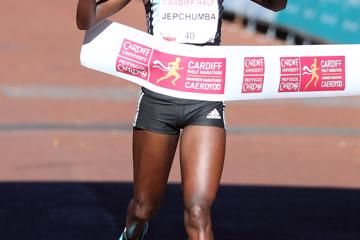