The Payton Jordan Invitational at Stanford University in Palo Alto on Sunday night (28) produced four world yearly leaders by Emma Coburn and Canadian Matt Hughes in the women’s and men’s Steeplechase, Ben True in the 5000m and Australian Ben St. Lawrence in the 10,000m.

It was a busy weekend for Olympic Steeplechase finalist Coburn, as she ran 4:11.36 in the 1500m at the Drake Relays on Friday before heading to California for Sunday’s Steeplechase.

Coburn led from the start and then held off a late charge by Jamie Cheever over the final two laps to win, 9:28.86 to 9:29.13. It was a substantial breakthrough for Cheever who came into Sunday’s race with a 9:51.42 PB from the 2012 US Olympic Trials.

Coburn felt fatigued on Sunday but pleased with the effort to simulate the conditions that she will have to endure at the IAAF World Championships in Moscow this summer.

“In the steeple, if you are tired, you are tired,” said Coburn. “There isn’t another gear you can change to with the barriers. I just tried to close as well as I could.”

Five men dipped under Elroy Gelant’s previous world-leading mark of 13:16.22 in the 5000m. True, who finished sixth at the IAAF World Cross Country Championships last month, improved his PB by more than six seconds to win in 13:14.44 and triumph in a furious sprint to the finish with steeplechase specialist Evan Jaeger who was second in a 13:14.60 PB.

The men’s 10,000m also had a dramatic finish with St. Lawrence outsprinting Japan’s Suguru Osako and Yuki Sato on the homestretch to win the event for the second time in three years. St. Lawrence thrust both arms as he crossed the line in celebration in 27:35.55.

There were five meet records set in the 18th annual meet named in honour of the late Payton Jordan, coach of the 1968 US Olympic team. In addition to the ones set by Coburn and Hughes in the Steeplechase, meet records were posted by Treniere Moser in the women’s 1500m with 4:06.40 – her fastest time for six years – and British hammer throwers Sophie Hitchon (70.53m) and Mark Dry (73.75m).

BACK
Pages related to this articleAthletes
Ben St Lawrence 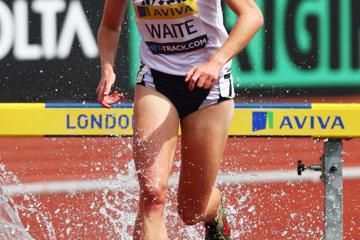