Camilo de Oliveira secured the sprint double after taking the 200m title, improving his PB by 0.01 to 20.28 two days after winning the 100m in 10.09. Chederik Van Wyk from South Africa finished second with 20.44 beating Marcus Lawler who clocked 20.55.

“I am very happy - the win in the 100m was very important but I wanted more,” said Camilo, who anchored a Brazilian quartet to an upset 4x100m victory at the IAAF World Relays in May. “I have objectives. My mind is focused on the Olympic Games next year.”

In a high quality men’s 400m hurdles contest, his teammate Dos Santos smashed his own South American U20 record clocking 48.57, knocking 0.27 from the standard he set in Bragança Paulista on 28 April to become the fifth fastest hurdler in the world this year.

The 19-year-old, who took bronze at the World U20 Championships in Tampere last year, won an exciting neck-to-neck battle in the final straight over South African Sokwakhana Zazini, who beat him to the world U20 title 12 months ago. Zazini clocked 48.73, well under his previous best of 49.29, to break the African U20 record. Patryk Dobek of Poland, the 2015 European U23 champion, was third, clocking 48.99.

“I achieved my goal to run consistently under 13 seconds and I am so happy,” Bogliolo said. “Today I was just focused on winning the race. I can run faster at the World Championships in Doha, when I will run against the best hurdlers in the world.”

Italian pole vaulter Roberta Bruni, the bronze medallist at the World Junior Championships seven years ago, signaled a return to form after years of injury problems by taking the title at 4.46m. Bruni, who set the national indoor record with 4.60m in 2013, beat US vaulters Rachel Baxter (4.41m) and Bridget Guy (4.31m).

You can watch a live stream of all the action from Friday 12 July (athletics day 5, WUG day 10) - both the morning and evening sessions - below. The competition schedule is here. 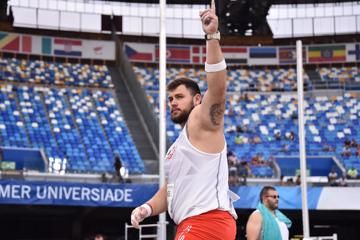 Record-breaking throw from Bukowiecki at Worl... 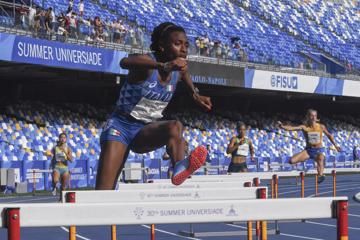 Folorunso and Ivanov the day 3 standouts at W...