Luckily, a handful of Polish athletes who are currently training in the Algarve stepped in at the last minute to ‘save’ the competition. On a sunny but windy day in the Algarve, more than 2000 runners competed in Albufeira.

In the absence of any African runners in the men’s race, Portuguese cross-country champion Manuel Damião gave the home crowd good reason to cheer.

Damião, a former 1500m specialist with a 3:34.37 PB, was one of several runners in the lead pack. He waited until after the first lap to change the pace, before going on to win in Albufeira for the first time in his long career, becoming the first Portuguese winner since 1995.

Damião crossed the finish line in 29:19, just five seconds ahead of Tomasz Szymkowiak, the 8:18 Steeplechase specialist from Poland who is currently preparing in Algarve for the IAAF World Cross Country Championship in Bydgoszcz. Another steeplechaser, Valerijs Zolnerovics of Latvia, finished third.

Fortunately for defending women’s champion Gorreti Chepkoech, she travelled to Albufeira on a different flight to her Kenyan team-mates and so made it to the race in time. She duly repeated her victory from last year, but it was easier than she expected.

Increasing her pace on the second lap, the 18-year-old made a solitary run for home and crossed the finish line in 19:16, 27 seconds ahead of European 10,000m champion Ana Dulce Felix, who improved on her finish from last year by one place but couldn’t repeat her win from 2010.

Felix was the only Portuguese runner in top 10, as the last place of podium went to the former European under-23 steeplechase champion Katarzyna Kowalska of Poland.

BACK
Pages related to this articleAthletes
Manuel Damiao 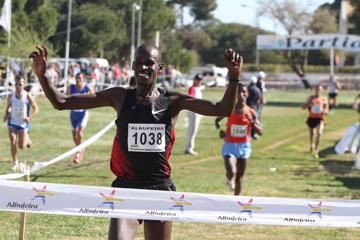