Cuevas’ triumph in 6:53:14 helped give Spain the men’s team title, while Russia took gold in the women’s team competition as Berg picked up silver as part of the Swedish team.

Ninety-four athletes representing 19 countries started the 22nd edition of this championship on a 100km loop course that took the athletes from Belves to Sarlat and back, passing by five magnificent castles.

Cuevas went into the championship as one of the pre-race favourites. Albericco Di Cecco, one of the other favourites, did not start the race due to injury, making Cuevas the fastest runner in the 100km field on a relatively difficult course.

At the start of the race, Cuevas took this into account and set off at a fast pace with his team-mate and former podium finisher Miguel Angel Jimenez. Further on in the race, Belgium’s Pieter Vermeesch, Ukraine’s Olek Holovnytskyy and Igor Tyazhkorob of Russia tried to stay in touch with the leaders.

As the race progressed in the second half, Cuevas increased his pace to open some space between himself and Jimenez. There was some action behind him too, as Vermeesch and Jose Antonio Requejo moved alongside Jimenez. With 20km to go, Michael Boch of France moved into contention for a podium finish with Jarle Risa of Norway.

When the runners made their way to the finish line in Belves, Cuevas crossed the line first to take the European title in 6:53:14, followed by local favourite Boch in second (6:56:49) and Requejo third (6:57:02).

In the women’s race, pre-race favourite and returning European Champion Kajsa Berg repeated as winner with a time of 7:38:52.

The Swede had an outstanding run in Seregno at the last European Championships, but Croatia’s Marija Vrajic and Russia’s Irina Antropova (nee Vishnevskaya) were also in good form.

As the race started and progressed, Vrajic moved to the front of the pack and led by almost five minutes at the 35km mark. She looked strong but behind her moves were being made that would ultimately change the outcome of the race.

Berg had started conservatively running with her Swedish team-mates, as did Antropova who ran with Irina Pankovska and Oksana Akimenkova.

By the half-way mark, Vrajic’s lead was quite strong but 25km later her lead was decreasing quickly. Shortly after, Berg moved into the lead with Antropova following to move into second place. About four minutes further back, Britain’s Sue Harrison had started to make her move for a podium finish, passing Pankovska.

Nadeem Khan (organisers) for the IAAF

BACK
Pages related to this articleAthletes
Asier Cuevas 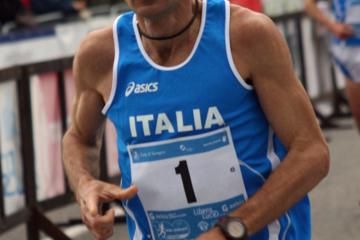