Ryan Crouser prevailed in an eagerly anticipated reunion of the Rio 2016 Olympic Games medallists as the 66th edition of the Hanzekovic Memorial IAAF World Challenge meeting got underway with a festive shot put-only competition in the City Fountains Park in central Zagreb on Monday (5).

After a pair of narrow back-to-back defeats to New Zealand's Tom Walsh over the past nine days, the newly-crowned Olympic champion turned the tables with a 22.28m victory in this attractive amphitheatre style setting, the second farthest throw of his career.

"Every time I throw against Tom and Joe (Kovacs) it's a great competition, they're awesome throwers, so I knew it would probably take 22 metres to win," said Crouser, whose victory in the Croatian capital was the fourth 22-metre competition of his career.

After a low-key opening round, USA's Darrell Hill set the tone in round two with a 21.44m effort, the second best throw of his career, to take the lead.

Spurred on by the enthusiastic crowd, Walsh took over in front in round three with 21.56m, but his lead would also be short-lived.

Crouser, ignoring the steady drizzle, moved up from fourth position to take command in the fourth round with a 21.95m toss, threatening the 22-metre line for the fourth straight competition.

Walsh responded with a 21.87m to close out the round, but Crouser wasn't done.

His fifth effort sailed through the early evening sky and landed at 22.28m, a toss that added six centimetres to the meeting record set by Christian Cantwell in 2010.

Walsh responded with his third Oceanian record in nine days but this time, unlike his 22.00m and 22.20m throws in Paris and Zurich, his 22.21m career best in Zagreb wasn't enough to supplant Crouser.

Nonetheless, the Zagreb contest was the first time since 1988 that two men threw beyond 22.20m in the same competition.

The US thrower ended the competition with a 21.67m throw in round six to seal his first victory since his triumph in Rio 18 days ago.

Crouser setting the bar high for 2017

“Today's throw technically was probably better than my throw in Rio, I'm just not quite in as good of shape,” said Crouser, who’ll end his season at the DecaNation meeting in Marseille on 13 September. “I've only lifted once since Rio. I'm not the strongest guy so my strength is definitely down but, technically, I'm in the best shape of my life.”

"At the beginning of the year, I could never expect that the season would go as good as it has," he continued. "It will be an interesting time this off season when I go back to rebuilding and start setting my goals for next year."

"The next step I think is 23 metres. Hopefully – no guarantees, but I like to set my goals and post them where I can see them – on the bathroom mirror. This year's was 22.20m and I managed to get that a few times.”

It is worth remembering that the world record is 23.12m and has been the high-water mark in the event since 1990.

Hill held on for third with Congo’s Frank Elemba, fourth in Rio, repeating that finish here with 20.89m. Kovacs, the Olympic silver medallist, was fifth with 20.42m.

Two-time Olympic champion Tomasz Majewski of Poland chose to wind down his career in the intimate Zagreb venue.

The popular 35-year-old, who was seventh with 20.24m, was appreciative of the attention, reception and spotlight he was given as he prepared for his final throw.

What's next for Majewski? "I'm just going to enjoy my life for a while," he said, smiling widely. 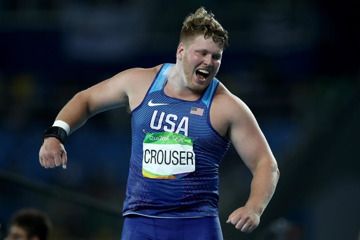