The athletics competition of the 12th National Games concluded in Shenyang on Wednesday evening (11) with a new generation of Chinese athletes stepping up.

Only three athletes, all women, were able to retain their titles from the 2009 Games – Zheng Xingjuan in the High Jump, Gong Lijiao in the Shot Put and Zhang Wenxiu in the Hammer. The future looks bright for China as they have plenty of young athletes ready to be medal contenders in Beijing for the 2015 IAAF World Championships.

Unsurprisingly, the best results of the last three days came in the field events with exciting contests in both the men’s and women’s Triple Jump finals.

On the men’s side, Dong Bin, ninth in Moscow, qualified with ease with 16.80m in qualification and looked to be the outstanding favourite. But 21-year-old Cao Shuo had other thoughts for the final and took the lead with his first jump of 16.90m.

Cao went on to jump 17.19m in round three before reaching his winning mark of 17.26m, a season’s best and the second-best jump of his career, in round four.

Dong could manage only 16.76m for second place while reigning champion Li Yanxi, competing in his first meet of the season because of an injury, could only jump 16.17m for seventh, far behind his Asian record of 17.59m from the 2009 Games.

In the women’s competition the top five finishers from the 2009 Games were in the final, but Chen Yufei didn’t come close to defending her title, finishing sixth with 13.69m.

Li Yanmei took the lead in round two with an equal PB of 14.35m, the same distance she had jumped in 2011. But Xie Limei, the national record-holder with 14.90m and the best Chinese triple jumper for years, was not going leave without a title this time after finishing fourth in 2005 and second in 2009.

Xie jumped her winning mark of 14.39m in both rounds three and four, her best since 2011. Deng Lina was third with 13.92m, the same mark achieved by Liu Yanan in fourth place.

Both Javelin finals produced good results as well. 24-year-old Zhang Li, a 64.74m performer last season and second at the 2009 National Games, grabbed the lead with her first throw of 62.07m, a season’s best.

Zhang led the competition until the last round with Li Lingwei, eighth in Moscow, in second place with her 61.67m second-round effort. The former Asian record-holder with her 65.11m throw last year, Li played her ace card in the last round with a winning effort of 63.06m, a season’s best.

In the men’s competition, Zhao Qinggang, who narrowly finished second in 2009, took the lead from the start, but his second-round throw of 83.14m put the title out of the reach of the others. Zhao’s personal best moved him to third on the Chinese all-time list and gave him a clear win ahead of 2009 winner Chen Qi, who was second with a 75.88m season’s best.

In the men’s High Jump, there was a big surprise as World finalist Zhang Guowei was unable to clear 2.23m and finished in sixth.

A 2.33m performer this season, Wang Yu won with a perfect record until 2.29m. The 22-year-old then made three unsuccessful attempts at a personal best height of 2.34m. Pai Long was second with a 2.26m season’s best and Wang Chen was tied for third with Li Peng, clearing 2.23m.

Zhang Peimeng, winner of the 100m earlier in the Games, achieved a sprint double by equalling his own national record of 20.47 to win the 200m.

In the men’s Decathlon, Qi Haifeng came agonisingly close to his fourth straight title but fell short, finishing in third place with a 7520 season’s best. Zhu Hengjun won with a 7662 season’s best.

Three out of four relay wins for Guangdong

Just like in 2009, Guangdong won both titles in the men’s relays, setting Games records in both events. Liang Jiahong, fourth in the 100m, anchored the Guangdong team to 38.73, the first ever sub-39 time by a Chinese team, other than the national team.

Su Bingtian, the 100m silver medallist, ran the third leg for the winning team, receiving the baton from World youth champion Mo Youxue. Sichuan was second in 39.12 and Zhejiang third in 39.25.

In a tight men’s 4x400m final, three teams went well below of the previous competition record. The victory was decided in the final 30 metres with individual 400m winner Chen Jianxin trying to lift his Tianjin team to the front, but he eventually finished in third in 3:05.34.

BACK
Pages related to this articleAthletes
Limei Xie 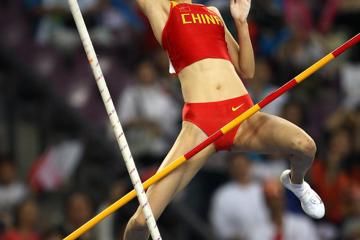