World indoor silver medallist and all-round talent Katarina Johnson-Thompson focused on her favoured jumping events at the British Championships in Birmingham this weekend (27-29) and was rewarded with an outdoor long jump PB.

Johnson-Thompson led from the outset and produced her best mark of 6.81m in round two. Having jumped that distance with wind assistance to win the world junior title in 2012, and again in 2014 to take world indoor silver, Johnson-Thompson was pleased to finally have a wind-legal outdoor best on a par with her indoor PB.

“I’m in my comfort zone in the long jump and the conditions were perfect,” said the 21-year-old. “I’m definitely leaning towards the long jump now for the European Championships.”

On Sunday, the final day of the championships, strong tailwinds got in the way of potential personal bests as William Sharman clocked a wind-assisted 13.18 to win the 110m hurdles.

Three-time world finalist Sharman breezed through his heat in 13.26 (2.7m/s) and went quicker in the final, winning in 13.18 (2.4m/s) and finished almost half a second ahead of Olympic fourth-place finisher Lawrence Clarke.

“It does feel good to be the British champion,” said Sharman. “The time was ok, it could have been better. I just need to get some quality training sessions in to be in good shape for the Commonwealths and Europeans now.”

World bronze medallist Tiffany Porter was another easy winner and triumphed in the women’s sprint hurdles by a similar margin, clocking a wind-legal 12.85.

The women’s 100m final saw one of the strongest tailwinds of the day as a 3.6m/s breeze resulted in three of the finalists running 11.15 or faster.

Asha Philip, the 2007 world youth champion, came out on top, winning in 11.11. She finished 0.04 ahead of Ashleigh Nelson and Jodie Williams, two other standout junior performers who – like Philip – have made a good transition to the senior ranks.

“Considering it was the fastest I’ve ever done, then it was the race of my life,” said Philip. “I came here for another win – that was my main aim. I knew it was going to be a difficult race.”

One day prior, Williams – Philip’s training partner – had won the 200m title in 22.79 and led two other competitors below the 23-second barrier as Bianca Williams clocked 22.88 and Anyika Onuora ran 22.97.

While the women’s sprints were bursting with young talent, the men’s 100m was won by 36-year-old Dwain Chambers.

Not that there was a lack of youth in the men’s short sprint; the pre-race favourite was 20-year-old Chijindu Ujah, who had clocked 9.96 earlier in the month. Other finalists included former world junior champion Harry Aikines-Aryeetey and world indoor 60m champion Richard Kilty.

“It is just such a relief; there is a lot of young potential out there,” said Chambers, who trains with Ujah. “I was running for my life – any one of those guys could have got me, everyone raises their intensity so I knew I had to raise my performance too and fortunately I did it. My start is always my strength.”

Another favourite was defeated in the longer sprint. World junior 100m champion and world 200m finalist Adam Gemili was comfortably beaten in the 200m by European bronze medallist Danny Talbot, 20.42 to 20.61 (-0.8m/s).

Sayers back on top

Less than two years after crashing out of the Olympic Games with injury, Goldie Sayers has returned to being the best javelin thrower in Britain and proved it by winning her 11th national title.

The national record-holder threw a season’s best of 62.75m to win by more than eight metres.

“There were tough moments, like when I woke up after my second operation and was told they needed to start the whole process again with a reconstruction of my elbow,” said Sayers. “To be back and to throw the farthest I’ve ever thrown here in Birmingham is great.”

The women’s 800m is always one of the most competitive events in Britain and this year was no different. So much so, three-time national champion Jemma Simpson did not make the final.

Ultimately European champion Lynsey Sharp prevailed, winning in 2:01.40 from 2007 world youth silver medallist Alison Leonard. Former European indoor champion Jenny Meadows was fourth, half a second ahead of teenager Jessica Judd, who is the fastest in Britain this year.

The women’s 1500m was also competitive as Olympic finalist Laura Weightman was locked in battle with European under-23 bronze medallist Laura Muir down the home straight. Weightman came out on top, winning in 4:09.77, a quarter of a second ahead of Muir. 2011 world silver medallist Hannah England was a distance third, more than two seconds behind the top two.

Elsewhere, the favourites lived up to expectations in the 400m hurdles as Niall Flannery (49.54) and Eilidh Child (55.58) came out on top. In the flat one-lap sprint, Martyn Rooney and Kelly Massey battled the wind to win in 45.78 and 52.42 respectively.

BACK
Pages related to this articleAthletes
Goldie SAYERS 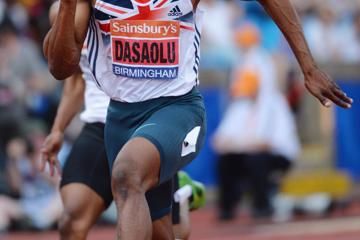