Su Bingtian fulfilled his role as the favourite for the 100m title at the Asian Games, winning in a Games record of 9.92 (0.8m/s) at Jakarta’s Gelora Bung Karno Main Stadium on Sunday (26).

Su, who has twice clocked 9.91 this year to equal the Asian record, dominated the race. Following a smooth acceleration and transition to open a gap at half way, the 28-year-old Chinese sprinter comfortably sprinted through the line to take 0.01 off the previous Games record set by Femi Ogunode in 2014.

“I don’t mind about the time, it was about getting the win,” said the world indoor silver medallist. Qatar’s Tosin Ogunode, the younger brother of the four-time Asian Games champion Femi Ogunode, took the silver medal in a photo-finish from Japan’s Ryota Yamagata, as they had an identical time of 10.00. Indonesia’s world U20 champion Lalu Muhammad Zohri finished in seventh in 10.20, just 0.02 shy of his lifetime best.

Wang and Haroun live up to expectations

With a lifetime best of 8.47m and a bronze medal from the 2015 IAAF World Championships, China’s Wang Jianan was the hot favourite for the men’s long jump. The 21-year-old did not disappoint and clinched the gold medal with his first-round jump of 8.24m (0.7m/s), breaking the Games record.

Teammate Zhang Yaoguang secured the silver medal with 8.15m, also achieved during the first round. Indonesia’s local hope Sapwaturrahman roused the fans in the stadium when he sailed out to a national record of 8.09m to take the bronze medal.

Japan’s world U20 champion Yuki Hashioka, who jumped 8.03m in yesterday’s qualifying round, leaped 8.05m in the final round but it wasn’t quite enough to make it on to the podium.

Having already broken the Games record in her semifinal with 50.86, Bahrain’s world silver medallist Salwa Eid Naser reduced the mark to 50.09 to win the women’s 400m. India’s world U20 champion Hima Das took silver in 50.79, her second national record in two days following her 51.00 clocking in the semifinals. Elina Mikhina of Kazakhstan took the bronze in 52.63.

Another world champion, Chinese shot putter Gong Lijiao, also produced a dominant performance to take gold. Gong successfully defended her title with a best of 19.66m; all five of her valid marks were beyond 19 metres and would have been more than enough to take gold ahead of compatriot Gao Yang, who threw 17.64m.

The Tajik thrower, who has won the past three titles at the Asian Games, posted an opening throw of 72.99m and improved to 74.16m on his third attempt. But in that same round, Qatar’s Ashraf Elseify took the lead with 75.61m before improving to 76.57m and then 76.88m to secure the gold medal.

Bahrain’s Edidiong Odiong – better known as a 200m sprinter, having won the 2016 world U20 title at that event – stepped down in distance to win the women’s 100m in a personal best of 11.30. The 21-year-old beat pre-race favourite and defending champion Wei Yongli of China, who ended up in third after being caught on the line by India's Dutee Chand, 11.32 to 11.33.

Bahrain secured a 1-2 finish in the men’s 10,000m, but it was the lesser-known Hassan Chani who ran away with the title from teammate Abraham Cheroben, the world half marathon silver medallist. At the half-way point, the duo had already lapped six of the 13 men in the field. Chani opened up a gap over the final few laps to win in 28:35.54 from Cheroben’s 29:00.29.

India’s Lakshmanan Govindan was the third athlete to cross the finish line but he was subsequently disqualified for a lane infringement, so the bronze medal was given to China’s Zhao Changhong (30:07.49).

Elsewhere, another Games record was recorded during the semifinals of the women’s 400m hurdles. Bahrain’s Kemi Adekoya, the 2016 world indoor 400m champion, clocked a season’s best of 54.87, with Vietnam’s Quach Thi Lan setting a Southeast Asian record of 55.74 behind her.

Thailand’s Suttisak Singkhon had a 200-point lead at the end of the first day of the decathlon, but he was overtaken by Keisuke Ushiro during the 1500m and had to settle for silver behind the Japanese, 7878 to 7809.

Jad Adrian Washif for the IAAF 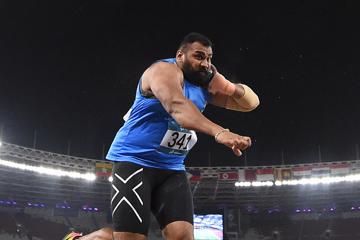