Sixteen disciplines begin their 2015 IAAF Diamond League journey in Shanghai on Sunday (17), but it is hard to see any of the other 15 events topping the men’s high jump.

As we saw in the opening IAAF Diamond League meeting in Doha on Friday night, the highlights may not necessarily come from where we expect. But Mutaz Essa Barshim and Bogdan Bondarenko appear to be in the form to defy more than gravity in their duel for supremacy as they chase Javier Sotomayor’s long-standing world record of 2.45m.

Other events are packed with contenders – the women’s 100m, 400m hurdles, triple jump and javelin; the men’s 400m, 110m hurdles and long jump all stand out. But the consistency and level of performance of Barshim and Bondarenko adds that little bit extra to their meeting.

Living where others merely visit

The men’s world record in the high jump has stood at 2.45m since 1993. The past two years have seen jumpers again returning to the level of 2.40m and above.

Last year, six men did so. But of the 12 outdoor clearances at 2.40m or higher, Bondarenko had five, Barshim four. Three men – Derek Drouin, Ivan Ukhov and Andriy Protsenko – had one each.

Put simply, Barshim and Bondarenko are living where others are merely visiting.

Like everything about their current rivalry, margins are wafer-thin. Last year Bondarenko edged Barshim on win-loss record 4-3, but the Qatari had the edge on height jumped, 2.43m to 2.42m. Bondarenko won the IAAF Continental Cup, but Barshim won the Diamond Race.

And so it continues into a new year. Barshim cleared 2.41m and 2.40m indoors in February. Bondarenko opened with a 2.37m win in the Kawasaki IAAF World Challenge meeting on 10 May. One of them is likely to leave Shanghai with an edge at the start of a long season which will return to Beijing for the IAAF World Championships in August, but one suspects it will be an edge only, not a decisive momentum swing.

The man capable of causing an upset may be China’s Zhang Guowei who jumped 2.33m and 2.35m in the US last month. With the meeting concluding with a retirement ceremony for Liu Xiang, one can only imagine what the reception for such an upset might be. Fortunately, Shanghai Stadium is not roofed.

Shelly-Ann Fraser-Pryce observed at the main press conference here that it is “hard to hide” in women’s sprints.

“There’s always someone, or sometimes many athletes, to push you,” the Olympic 100m and dual world champion sprinter said.

That observation is true again of the Shanghai field in which Fraser-Pryce is confronted by her predecessor as Olympic champion, Veronica Campbell-Brown, Michelle-Lee Ahye (10.97 this year) and Tori Bowie (fastest in the world last year with 10.80).

James and Merritt face off again

The men’s 400m features another of the head-to-head clashes the IAAF Diamond League was set up to nourish. Kirani James and La Shawn Merritt have been going stride-for-stride over the past three years.

The precocious James won Grenada’s first Olympic gold medal in London in 2012, Merritt pulling up injured in the preliminaries. Merritt hit back in taking gold at the 2013 World Championships and won the Diamond Race last year.

James leads the world coming in, with a 44.22 at last month’s Drake Relays. Merritt has run ‘only’ 44.80 at the Kingston IAAF World Challenge meeting on 9 May (the winner then, Youssef Ahmed Masrahi, is not running here).

Kaliese Spencer carried pretty well all before her in the 400m hurdles last year, winning the Diamond Race, the Continental Cup and the Commonwealth Games and having the year’s fastest time.

But the one loss in Spencer’s 13 races came in the very first when Kemi Adekoya upset her at the IAAF Diamond League meeting in Doha.

The tall Spencer is formidable when she gets everything right, but has been vulnerable to losing form over the final few hurdles. If she does, others could pounce.

It will be Spencer’s first hurdles race of the season. None of her rivals have yet run quick times, with last year’s world number two Kori Carter leading the way at 55.12 from her US compatriot Tiffany Williams, 55.35.

Fastest on personal bests is US veteran Lashinda Demus who ran her 52.47 in winning the gold medal at the 2011 World Championships.

With Liu Xiang gone, Shanghai awaits a new 110m hurdles hero. Locals will hope that it is Xie Wenjun, but David Oliver made it clear that he is not satisfied merely with being the world champion.

“I definitely feel I’m the icon of the event,” Oliver cheekily asserted when he, world record-holder Aries Merritt and Xie were asked at the media conference.

Oliver certainly is the world champion and the fastest man in the field on 2015 times, but he may need to be quick and clean to stay ahead of Merritt and Xie, who won last year and will have no lack of motivation with Liu sitting in the stands.

Chinese expectations will also be on Li Jinzhe in the long jump, an event he described today as “looking like the final of a World Championships”.

The world indoor silver medallist was feeling the cold at the press conference as he moved out of the direct flow of the air conditioning, but he is clearly expecting some heat in the competition.

Olympic champion Greg Rutherford is determined to return to the top of his game this year, Jeff Henderson leads the year list with 8.50m last month and world champion Aleksandr Menkov will be having his first competition for 2015.

Obergfoll has not competed since giving birth to her first child last year. She will meet her predecessor as world champion, Mariya Abakumova, Sunette Viljoen, Kim Mickle, Kathryn Mitchell, Liz Gleadle and Chinese pair Li Lingwei and Lu Huihui in a loaded field.

The middle-distance events are not as lustrous as usual, but still boast the likes of world champion Eunice Sum in the 800m, world cross-country champion Agnes Tirop in the 5000m and last year’s Diamond Race winner Jairus Birech in the men’s 3000m steeplechase. 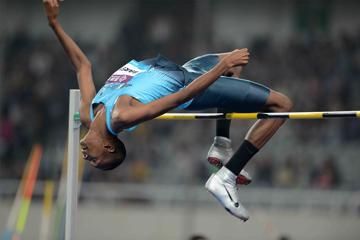 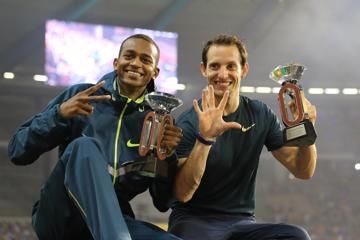 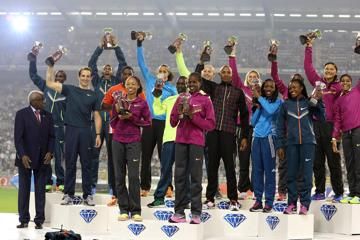