Past champions set to clash at Santiago de Chile Marathon

Another former winner, Julius Kipyego Keter, is also returning to Santiago. The 28-year-old Kenyan won in the Chilean capital in 2011 and 2013 and finished fourth last year. He has started his season well with a 2:10:34 second-place finish in Hong Kong in February. He followed that with a victory one week later at the Guadalajara Half Marathon, running 1:03:55 at altitude. If he gets close to his season’s best, he could challenge the men’s race record of 2:11:01, set by Victor Kipchirchir in 2016.

“The circuit was improved back for 2013, so there are fewer hills and it is overall faster,” said Keter at the press conference preview to the race. “The temperature is also perfect, so we hope to have a good day and that the competition brings our performances to a good level. There are fine athletes from Kenya, the rest of Africa and other nations. We believe we can have a good race.”

Melchor, the South American record-holder at 2:26:48, will return to Santiago where she holds the 2:28:18 race record from her triumph in 2015. Melchor was 25th in the marathon at the 2012 Olympics but had a disappointing experience in Rio last year as she did not finish the race. This will be her first race of 2017.

Biwott set her personal best of 2:30:47 last year and is the only one of the three favourites who has already competed in 2017. The 34-year-old Kenyan ran 2:32:54 to finish fifth at the Seville Marathon in February.

The Santiago Marathon goes around the Chilean capital in one loop, starting at 565m of elevation and going as high as 665m of altitude before descending back to 565m for its conclusion. The race will start and end at the Plaza de la Ciudadanía by the Presidential Palace.

BACK
Pages related to this articleAthletes
Inés Melchor 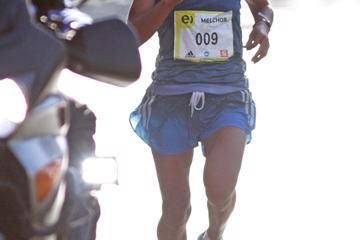 Lobuwan and Melchor win at the Santiago de Ch...