Joyce Chepkirui says she’s in the kind of form to run the best race of her career on Saturday (5) at the Sportisimo Prague Half Marathon, an IAAF Gold Label Road Race.

The Kenyan, who is a training partner of world half marathon record-holder Florence Kiplagat, is targeting a time faster than the course record of 1:06:48, set last year by recent world half-marathon champion Gladys Cherono.

A year ago, Chepkirui was unlucky to suffer of an achilles tendon problem during her marathon debut in London. She still managed to finish, but her 2:35:54 clocking in 15th place was obviously not what she had hoped for.

There are no such problems ahead of Saturday’s race in the Czech capital and Chepkirui has in the meantime produced a stunning performance over the shorter 10km distance.

In Berlin’s Asics Grand 10 last October, the 25-year-old won in a German all-comers’ record of 30:37. Just 16 second away from the world record, it ranks her sixth on the world all-time list and suggests she could well improve on her personal best of 1:07:03 in Prague.

When she makes her way to the start line on Saturday, Chepkirui will be hoping to produce a similar performance to that of Berlin. “I’m in the same kind of shape I was before Berlin,” she said.

“My aim is to run sub-66 minutes,” she said during the press conference in the aptly named Cloud Bar of Prague’s Hilton Hotel, overlooking the city. Does she even expect to come close to the world record? “I know the time of the record,” she replied. “When I left Kenya yesterday, Florence told me: Maybe you will break my record!”

But the competition will be tough, as seven of the runners have sub-70-minute PBs, including two-time world cross-country champion Emily Chebet, who has run 1:08:20.

Ethiopia’s Firehiwot Dado clocked her PB of 1:08:35 when winning the New York Half Marathon two years ago, having won the New York Marathon four months prior.

The high-quality men’s race also looks wide open with four runners having run faster than an hour for the distance.

Ethiopia’s Hunegnaw Mesfin and Kenya’s Peter Kirui have the same PB of 59:39 while Kenya’s Philemon Limo has gone a fraction faster with 59:30. Another Kenyan, Evans Barkowet Kiplagat, is the other sub-60-minute runner and has a best of 59:56.

Two other Kenyans featuring in Saturday’s race have gone tantalisingly close to the one-hour mark and could hope to dip under 60 minutes in Prague. Henry Kiplagat has run 1:00:01, while Nicholas Kipkemboi’s PB is 1:00:15.

Sadly, Ethiopia’s course record-holder Atsedu Tsegay, who set a national record of 58:47 in Prague in 2012, has had to withdraw because of typhoid infection. 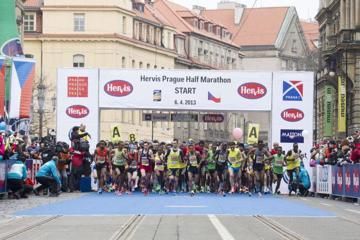 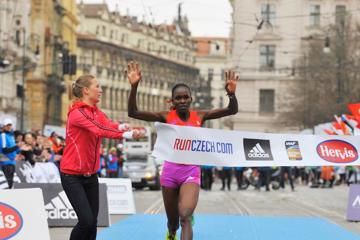 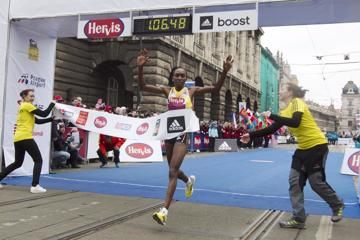