Defending champion Mosinet Geremew is the first two-time winner in the 11 year history of Yangzhou Jianzhen International Half Marathon. The 25-year-old Ethiopian will return to the historic Chinese city in a bid to win a third consecutive title at this IAAF Gold Label Road Race on Sunday (23).

Geremew registered the first-ever sub-60-minute half marathon on Chinese soil in 2015, setting a course record of 59:52 as he edged Kenya’s runner-up Geoffrey Kirui by just three seconds. Last year Geremew once again benefited from his powerful home stretch running abilities, winning a five-man battle in the last 300 metres to retain his title with a scant one-second margin in 1:00:43.

This time Geremew, who has a personal best of 59:11 set in 2014 when he finished third in New Delhi, will face an even tougher challenge as the organisers have assembled a strong field with eleven sub-one hour runners in the race.

Ethiopia’s national record holder Atsedu Tsegay is the fastest man on paper with a PB of 58:47 set when winning the 2012 Prague Half Marathon, the fifth fastest performance of all-time. The 25-year-old has also showed solid form in 2017, clocking 1:00:58 en route to runner-up finish at the Marugame International Half Marathon in Japan in February.

Bahrain’s Asian record holder Abraham Cheroben is the other sub-59 runner on the entry list. The 24-year-old won the 2014 Valencia Half Marathon in 58:48, the fastest time that year and sixth fastest of all time, and went on to win in Valencia in 59:10 the next year, which was also the world leading half marathon time recorded in 2015. More recently Cheroben finished tenth in the 10,000m at the 2016 Olympic Games in 27:31.86.

As the world record holder for 10km and 15km, Leonard Patrick Komon is also a serious contender. The 29-year-old Kenyan set his PB of 59:14 in his half marathon debut in 2014 and this season finished 12th at the IAAF World Cross Country Championships Kampala 2017.

Eritrea’s Nguse Amlosom, winner in 2014, will also be aiming to reclaim the title. It will be his fourth appearance in Yangzhou following two third place finishes in 2013 and 2015 respectively. In 2014 he clocked a winning time of 1:00:08, which stood as the course record until Geremew broke it one year later.

It would also be unwise to neglect Ethiopia’s Endeshaw Negesse, who has a fast marathon PB of 2:04:52 set at the 2013 Dubai Marathon where he finished fourth. In 2015 Negesse won the Tokyo Marathon with 2:06:00, the second fastest time of his career. But last year he was hampered by injuries and did not compete.

Wacera vs Yalew in the women’s contest

Reigning world half marathon champion and defending champion Peres Jepchirchir, who set a course record of 1:17:21 last year, will not compete in Yangzhou this time. Her countrywoman Mary Wacera will be the biggest hope to extend Kenya’s three-year winning steak in the women’s race.

Wacera has also been enjoying a successful season in 2017, winning the World’s Best 10k in San Juan for the third time in 31:41 and finishing third at the Houston Half Marathon in 1:08:38 in January.

Ethiopia’s Genet Yalew could be the biggest threat to Wacera. Yalew set her PB of 1:06:26 when finishing third at the Ras Al Khaimah Half Marathon last year, a mark that puts her 13th on the all-time list. The last half marathon victory for the 2011 world junior cross country silver medallist was last October when she clocked 1:10:25 to win in Lisbon.

Kenya’s Paskalia Chepkorir Kipkoech, 28, is another woman to watch. She clocked 1:07:58 to finish third in Yangzhou last year, 41 seconds shy of her PB set back in 2012. She is also the bronze medallist at the IAAF World Half Marathon Championships in 2012 and seventh place finisher in Cardiff last year. 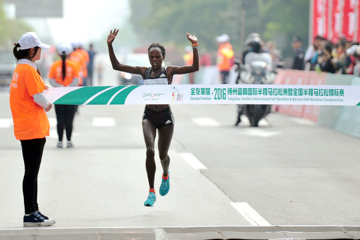 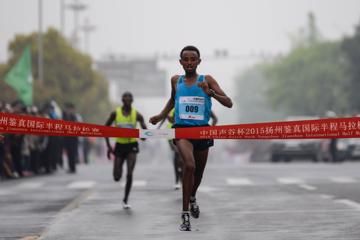