Marius Kimutai and defending champion Ruth Chepngetich of Kenya will start as the favourites at the Vodafone Istanbul Marathon, an IAAF Gold Label Road Race, on Sunday (11).

Connecting two continents since 1979, the Istanbul Marathon is celebrating its 40th birthday this year. As in previous years, the race starts on the Asian side of the city, crosses the 15 July Martyrs Bridge over the Bosphorus, and finishes on the European side at the Hippodrome, one of the oldest race tracks in the world, situated in the Sultanahmet district, where the famous Blue Mosque and Hagia Sophia are located.

The hot favourite to arrive first in the historical peninsula is Kimutai who can boast of a 2:05:47 personal best, achieved in Rotterdam two years ago. Having finished his recent seven marathons well under 2:10, the Kenyan is also a candidate to break the 2:10:42 race record set by Kenyan Vincent Kiplagat in 2010, a performance that is also the Turkish all-comers record.

Kimutai is likely to be challenged by Ethiopia’s Getu Feleke whose career best is 2:04:50 set at the 2012 Rotterdam Marathon. More recently, Feleke’s clocked 2:07:46 at the Frankfurt Marathon last year. However, 21-year-old Bahraini Abdi Ibrahim Abdo, who has a fresh PB of 2:08:32 from Rome this year, is expected to be a strong contender as well.

The field also includes winners of the most recent two editions, 2017 champion Abraham Kiprotich of France and 2016 champion Evans Kiplagat of Azerbaijan. Last year’s runner-up Jacob Kendagor of Kenya also returns. Salah Eddine Bounasr of Morocco will be another athlete to watch.

On the women’s side, race record holder Chepngetich returns to defend her title. The Kenyan was a surprise winner in her debut last year, smashing the previous record in 2:22:36. The 24-year-old finished second in 2:22:59 at the Paris Marathon earlier this year.

Chepngetich may face tough competition from her compatriots Margaret Agai and Bornes Kitur, with lifetime bests of 2:23:28 and 2:24:19 respectively. The women’s race will also feature Merima Mohammed of Bahrain, and Diana Lobacevske of Lithuania, 17th in Rio Olympic Games.

The marathon is one of the four races in Istanbul on Sunday. The 10km, 15km and marathon are expected to gather 35,000 runners. Meanwhile, the traditional 8km fun run, which is the only occasion each year for the citizens of Istanbul to cross from one continent to the other on foot, is expected to gather nearly 100,000 entrants on the day.

Wesley Korir will be hoping to resume his racing career with a win at the 16th edition of the BLOM Bank Beirut Marathon, an IAAF Silver Label road race, on Sunday morning (11).

The 35-year-old Kenyan, a winner of the Boston Marathon in 2012, has not raced in 19 months but is optimistic of a strong showing in this weekend’s race in the Lebanese capital.

“Everything is going well,” said Korir. “Getting a win in Beirut will give me a boost as I get back to the top level.”

A member of Kenyan Parliament since 2013, Korir took time out from his political career earlier this year ahead of the birth of his fourth child, re-committing himself to a return to top-level racing. To succeed in Beirut he will have to be near his best, with Ethiopia’s Bazu Worku, who has a best of 2:05:25 and was a winner at the Houston Marathon this year, also in the field.

Kenyans Ezekial Omullo and Andrew Ben Kimutai, who have both run below 2:09, are also sure to feature. There will also be a duo of exciting prospects in Uganda’s Felix Chemonges and Morocco’s Mohamed Ahmami, who bring impressive pedigree at the shorter distances. An interesting debutant at the distance is Kenya’s Kalipus Lomwai, who was a pacemaker at the race last year but carries a classy half marathon best of 1:01:22. Others of note include Bahrain’s Benson Seurei and Ethiopians Gemechu Edeo and Hiribo Shano.

The women’s race is set to be a wide-open contest with an international field spanning seven different nationalities. Though Kenya and Ethiopia are well represented it will come as no surprise if the title goes to one of their East African rivals, with Eritrea’s Nazret Weldu set to make her debut at the distance.

Earlier this year she finished 26th in the IAAF World Half Marathon Championships in Valencia in 1:11:45 and if she carries that form to the full marathon she will be a force to be reckoned with.

Another who will be in contention is Lithuania’s Raza Drazdauskaite, a three-time Olympian who clocked 2:29:29 to finish 26th at the London Olympic Games in 2012, as well as Sviatlana Kudzelich of Belarus, a European indoor silver medallist over 3000m in 2015.

Ethiopia will have a trio of strong contenders in the form of Almensh Herpha, Medina Deme Armino and Nigist Muluneh Desta. Herpha took victory at the Lagos City Marathon on her most recent outing over this distance, while the Ethiopian has previous form at the BLOM Bank Beirut Marathon, finishing third in 2016.

This year’s event will also incorporate the 50th World Military Marathon Championship, which will feature 98 runners from almost 20 countries. The BLOM Bank Beirut Marathon will also be the first leg of the Asia Premier Marathons, which is now in its second season.

All races will start at the picturesque Beirut Waterfront on General Wissam El Hassan Avenue and cross two parallel finish lines at the historic Martyrs’ Square in downtown Beirut.

Kenyans Stephen Chemlany and Dominic Ruto will line up for the Hefei International Marathon on Sunday (11) iwith the hopes of breaking the 2:08:54 course record at this IAAF Bronze Label road race.

Chemlany is the fastest entrant on paper with a career best of 2:06:24 from the 2014 Seoul Marathon where he finished second. It will be his second race this year following his third place finish at the Prague Marathon six month ago where he clocked 2:09:42.

Dominic Ruto at the 2017 Rome Marathon

The 36-year-old has experienced a title drought over the classic distance, with his last victory nearly seven years ago in Macao back in 2011

The 28-year-old Ruto has also run a solid race in the current season, clocking 2:09:49 to finish third in Hengshui, 41 seconds shy of his personal best achieved in Rome last April.

Ethiopia’s Dereje Debele, on the contrary, needs to prove his competitiveness in Hefei. The 32-year-old recorded his lifetime best of 2:07:48 from his victory in Dusseldorf five years ago, but hasn’t broken the 2:10 barrier since 2015. His most recent race was a 2:10:23 performance in Oita, Japan last February.

The other sub-2:10 runner in the field is Edwin Kimaiyo of Kenya, whose PB of 2:09:12 was set in Shanghai last year. The 32-year-old is still chasing his first international marathon title since his debut in 2010.

The women’s race is led by Aberash Fayesa. The 23-year-old Ethiopian clocked 2:27:04 to finish third in Barcelona last year. But her only outing this year was an eighth place finish at the Yellow River Estuary International Marathon in Dongying in 2:38:43. The 23-year-old will be keen to bounce back from that disappointing performance on Sunday.

Kenya’s Racheal Mutgaa also competed in Dongying and finished one place in front of Fayesa. She has gained plenty of experiences running in China including taking the tops honours in Wuzhong in 2013. Her career best of 2:30:11 was also set in China when she took second place in Guangzhou three years ago.

The field also includes US veteran Janet Cherobon-Bawcom, 40, a 2:29:45 performer who was 11th finisher at the 2016 World Half Marathon Championships in Cardiff.

Babo and Kiptoo back to defend in Guadalajara

Ido, who has 2:13:26 lifetime best from the 2017 Zhengzhou Marathon, will take on Moroccan Abdelkabir Saji, who clocked 2:13:44 in Marrakech in January and Kenyan Milton Kiplagat Rotich, whose 2:11:15 best came at the Valencia Marathon in 2016.

In the women's race, Kiptoo will face compatriot Nancy Jebichi Arusei, who has a lifetime best of 2:32:54 set in April's Santiago Marathon. That's nearly seven minutes faster than that of Kiptoo, who will be running her fourth marathon of the year.

They'll face an Ethiopian contingent that includes Bilo Basanke, who clocked 2:34:02 for fourth in the Rabat Marathon in March; Lemlem Berha, who clocked 2:29:42 at the Kosice Peace Marathon in 2013; and Belaynesh Shifera, who brings 2:31:08 credentials from the 2015 Barcelona Marathon.

The course records have proved difficult to beat in the warm climes of Mexico's second largest city and capital of the Pacific state of Jalisco. the men's record of 2:14:00 was set by Kenyan Christopher Toroitich Kiprotich in 2008 while the women's mark of 2:35:55, set by Mexican Adriana Fernandez, dates back to 2009.

BACK
Pages related to this articleAthletes
Wesley Korir 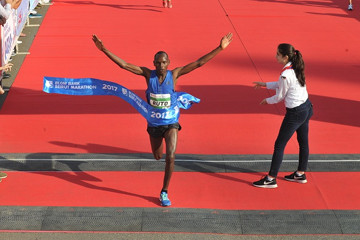 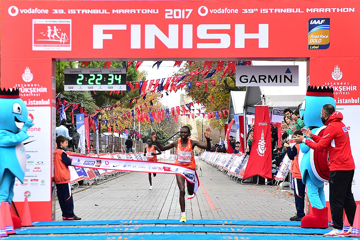 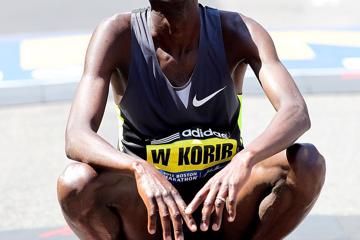