With 50 days to go until the IAAF’s showpiece event gets under way in the Qatari capital, the Eatons are looking forward to 10 days of enthralling athletics action from 27 September until 6 October in what will be their first World Championships as spectators.

For them, the highlight will fall on 2-3 October when – for the first time ever at an IAAF World Championships – the decathlon and heptathlon will be held concurrently, creating two days of excitement for fans of combined events. The 2020 Tokyo Olympic Games schedule will also follow this approach.

The champion pair retired after the 2016 Olympic Games, where Eaton won decathlon gold and Theisen-Eaton took the heptathlon bronze medal. But both have continued to follow the sport in recent years.

Theisen-Eaton, who earned world silver medals in the heptathlon in 2013 and 2015, is looking forward to seeing the revamped schedule in action as it provides a new showcase for the combined events.

"Athletics holds such a special place in my heart and I am truly so excited and honored to be an IAAF Ambassador, and to be a part of the IAAF World Athletics Championships Doha 2019," she said. "This outdoor World Championships will be unique as it will be the first time the multi event athletes are competing together on the same two days.

"Ashton and I had the opportunity to compete side by side at both the 2014 and 2016 World Indoor Championships, and the energy created from sharing that experience together was unlike any other championship. To do this at an outdoor world championship is really special, and I’m looking forward to watching the camaraderie between the heptathletes and decathletes."

Eaton, winner of the 2013 and 2015 world decathlon titles, says the combined events will be one of the highlights of the championships.

"Some of my most memorable and transformable experiences as a person and athlete have been at the IAAF World Championships - from Berlin in 2009, to Daegu in 2011, to Beijing in 2015," said the two-time Olympic champion. "I’m excited and honored to attend Doha as an ambassador of athletics.

"This year there is anticipation for great performances in many of the single events. But in my opinion the combined events will be the marquee competition of the championships because for one, the men and women will be on the field at the same time making for a fun and lively atmosphere of sport, and two, the caliber of the athletes is arguably the best in history, both veteran and novice.

"I believe we’re witnessing the development of the best athletes of all time." 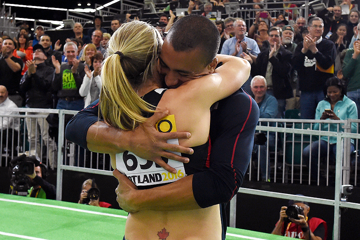 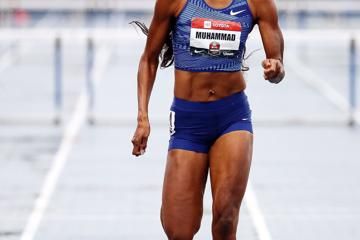